GLOBALWA.org / Our Blog / Transparency and Corruption: like Garlic and Vampires 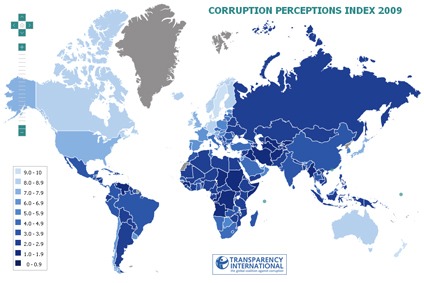 Transparency International released its annual Corruption Perceptions Index (CPI) last week.  Not surprisingly, some of the biggest recipients of U.S. foreign aid fared poorly in the corruption rankings- countries like Afghanistan, Iraq, Sudan, and Pakistan.  Daniel Kaufmann writes in the Brookings Institute’s blog  that it would be misguided to simply pull the plug on aid channeled to corrupt countries, but we need to examine the evidence and ask some hard questions.  To allow the status quo to continue would be just as negligent as discontinuing aid entirely.  Kaufmann suggests five important questions to ask of U.S. foreign aid, which I summarize here:

There are currently 28 EITI candidate countries, which means that they are in the process of reporting on their extractive industries but they haven’t had their reports validated yet.  Two countries have completed the validation process and are now compliant countries, Azerbaijan and Liberia.  It may be a coincidence, but these two countries have improved their standing on the Corruption Perceptions Index since becoming EITI compliant.  EITI countries are mostly resource-rich developing countries that have had problems with the so-called resource curse, but Norway is also a candidate country, and EITI is open to any resource-rich country.  In fact, many observers are calling for countries such as the United States and Russia to become EITI compliant.

Where does the United States stand on the EITI?  It is officially listed as a supporting country, which means that it endorses the initiative.  The U.S. also provides funds to EITI, and it just contributed $6 million to the EITI trust fund facility, which is managed by the World Bank.  In September, Senator Dick Lugar introduced the Energy Security Through Transparency Act, S. 1700 , which would: require companies listed on U.S. stock exchanges to disclose their extractive payments to foreign governments; encourage the President to work multilaterally with other countries to promote similar disclosure; express the sense of Congress that the United States should become an “implementing country” of EITI; and commit the Department of the Interior to disclose extractive payments received for resources derived from federal lands.

And while we’re talking about transparency, U.S. foreign aid could stand to have some light shed on it too.  It could commit to being more transparent about aid through the International Aid Transparency Initiative , which came out of the Accra High Level Forum on Aid Effectiveness in September 2008.  So far most developed countries are signatories, but the United States is absent from that list.