Nicholas Kristof, renown New York Times columnist, opens the first annual Global Washington Conference: Blueprint for Action today at the Microsoft campus in Renton, WA. He recounts the story of living in a bugged apartment in China reserved for NY Times journalists only to realize the listening device was actually the apartment’s doorbell. This experience highlights his message that, “whenever you think you know what’s going on in a foreign culture, it’s time to back down and gain some humility.”  There is growing concern over the effectiveness of foreign aid thanks to fears of corruption and bureaucracy around the world. Kristof admits, “helping people is harder than it looks, but we’re getting better at figuring out what aid is most cost effective” thanks to the growing involvement of the business community who emphasize metrics and cost analysis. “Seattle has been at the heart of that.” Kristof chiefly promotes investing in women by using business sense to improve aid efficacy. He contends there is good evidence that development efforts focusing on education and women “really do bring societies back from the brink.” Advocates overemphasize the tragedy and injustice that poor women suffer around the world and instead should be advocating more for the opportunity that women present.  He says, “emphasizing the opportunity gets the most traction. For most poor countries, the greatest unexploited economic investment is the female population.” Many solutions, focusing on women, can be cost-effective and simple to implement. One area with the best record is health. The two political camps in HIV prevention endlessly debate over the use of condoms or abstinence as a solution. Kristof highlights how in S. Africa, one simple intervention with success in mitigating HIV transmission avoided both of these solutions. The intervention involved teaching teenage girls to avoid relationships with middle-aged men, known as “sugar daddies,” who have a high rate of HIV. This successful intervention involved educators going from classroom to classroom and cost less than $1 per person. Kristof also hails deworming as another low-cost solution to promoting school attendance and education for poor children, especially girls. Deworming a child costs less than 50 cents a year. Micro-lending is a huge trend in development today. However, according to Kristof, its true effectiveness lies in enabling economically disenfranchised populations to save through micro-savings. Kristof explains, “People don’t need an income, they need a cushion.” Many people in developing countries do not have access to banks or safe places to secure their finances due to weather and theft. In some places with access banks, such as parts of West Africa, people face paying 80% a year to save their money. It is no secret that micro-lending has enabled women to enhance their societal statuses in developing countries, but part of this equation is education. 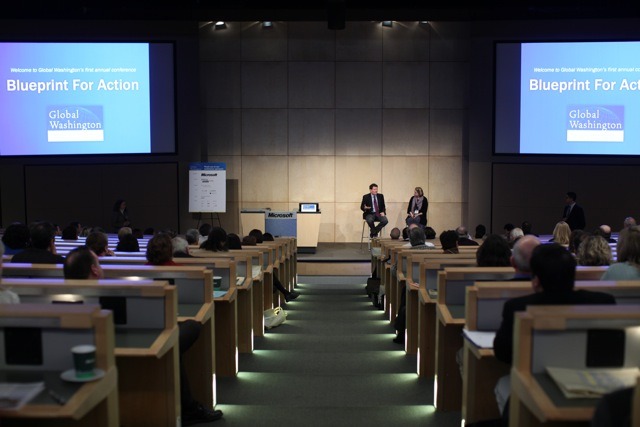 Educating women and empowering them helps to end the cycle of poverty in developing countries and reduces world conflict.  One example Kristof gives is the difference between Bangladesh and Pakistan. When Bangladesh split from Pakistan in 1971, it focused primarily on education, especially for women. This education initiative created a basis for what is now Bangladesh’s bustling garment industry which provided women with jobs and status in their communities. Enhancing education also helped to facilitate micro-lending institutions like the famed Grameen bank, which has also been instrumental in elevating the status of women. Meanwhile, Pakistan contrasts with a large population of uneducated illiterate girls and continues to experience security issues with extremists and terrorists along with extreme poverty. The proof is in the pudding as Kristof describes that educated women will invest in the education of their children whereas men will spend the larger portion of their earnings in alcohol, tobacco, and prostitution. Giving women more earning power with education, micro-lending, status, legal rights will lead to children being the beneficiaries of these earnings. With this in mind, it is no wonder that the metric for stability used by the U.S. in an Afghani district is the proportion of girls who are educated within the district.