GLOBALWA.org / Our Blog / A Conversation with Robert Reich on Globalization and The Common Good

A Conversation with Robert Reich on Globalization and The Common Good 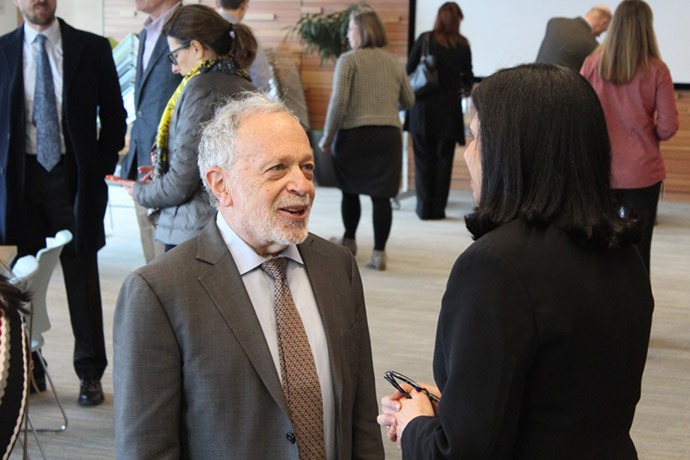 Supporters of Global Washington and World Affairs Council met on Monday, March 5, with Robert Reich, the former Secretary of Labor under President Clinton. A political commentator, professor, and author, Reich previously served in the administrations of Presidents Gerald Ford and Jimmy Carter.

In town to promote his new book, The Common Good, Reich was scheduled to address a sold out Town Hall event that evening. At the invite-only gathering at Global Washington, Reich answered wide-ranging questions posed by the audience, and moderated by Seattle University economics professor, Meena Rishi, PhD.

Rishi kicked off the conversation with a provocative question. While Reich’s new book mourns the erosion of the common good, she asked whether the rules of the game were ever really fair.

Reich acknowledged that it’s important not to romanticize the past. When he first began working in Washington D.C., as an intern in Robert F. Kennedy’s office, women were second class citizens, and black people were treated “worse than second class citizens.” Not only that, the Vietnam War was escalating and America found itself deeply divided. But within Kennedy’s office, and more broadly, there was an unflagging optimism, hope and passion to change the rules to benefit those less fortunate.

At that time, too, when it came to dealing with the rest of the world, America exhibited what he called enlightened self-interest, recognizing that the world economy is not a zero-sum game. Today’s retreat from globalization, he said, not just on trade but also a retreat from our obligations to NATO and the Paris climate accords, this is all “dangerous insanity.” But the roots, Reich insists are deep in the politics of our country.

As Secretary of Labor, Reich toured communities across rural America and spoke with people about their challenges. Time and again, people described to him how they were less and less able to make ends meet, and how they could no longer get by on a single income. Their communities were suffering.

Most notably, Reich’s listening tours took place during the mid- to late 1990s, when the U.S. economy was booming. And yet everywhere Reich visited, he said he heard the same lament. “It was not just inequality, but it was declining real wages, growing economic insecurity, and less opportunity for their kids.”

“That was an alarm bell for me,” Reich said. So he went back to Washington and told anyone who would listen: “If we don’t create a different trajectory for this nation, we are going to have a demagogue who’s going to take advantage of the fear, and channel that fear toward all of the usual objects of fear – the foreigners, and the people who are different, people of color, people of different religions.” 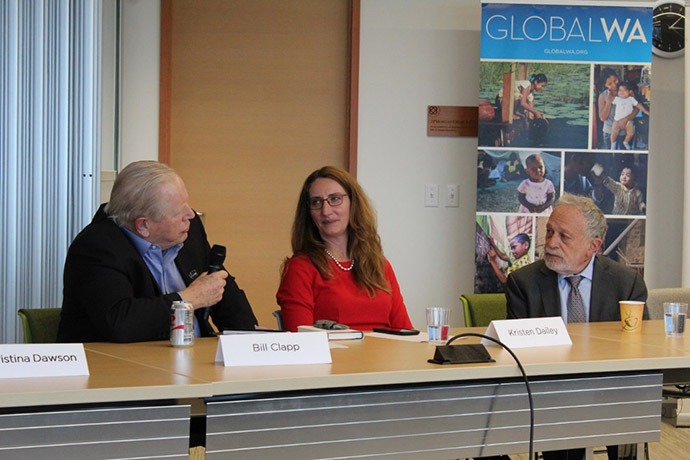 As the poor and middle class in America continue to be squeezed economically, there is growing antipathy toward globalization. Increased automation and use of artificial intelligence in industry will only accelerate that anger. Artificial Intelligence will be a major job eliminator in so-called advanced nations, but “globalization will be blamed for it,” Reich said.

Asked about potential economic solutions, Reich advocated a couple of big ideas. One is expanding the earned income credit, which he noted was originally a Conservative policy idea. The other is creating a universal basic income, which he said will “probably be necessary to maintain middle-class jobs.”

In the meantime, Reich’s advice to those assembled was to “learn how to talk with one another again,” especially those who disagree with you. “If you only talk with people who agree with you, you won’t learn anything.”