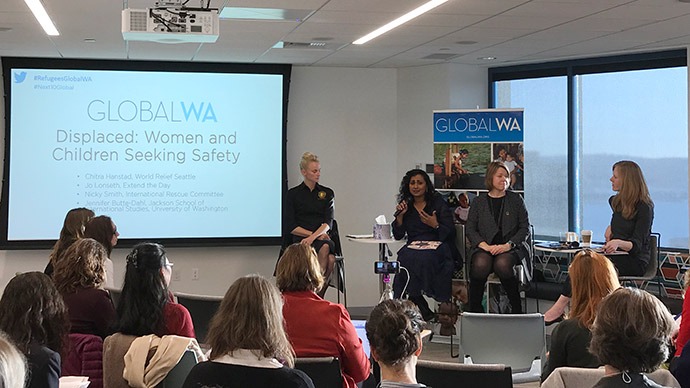 Imagine, suddenly in the middle of the night, you learn that a neighboring village has been attacked and you know that it is time to leave. You wake up your children, pack some valuables and provisions, and leave your home with your family – not knowing whether you will ever be able to return. You depart by foot or pay for a ride in an overpriced, crowded, and unsafe vehicle. You experience assault, even sexual assault, and you do not know where to go or whom you can trust. Once you arrive at a safer place you have to figure out – with thousands of other people – where to stay, how to get food and clean water, how to earn some money, how to access health services for diseases such as diarrhea or the common cold, both of which are normally curable, however, under these dire circumstances, might be deadly (especially for your younger children), and you realize that you may never return home again.

At a recent event at Global Washington, this is how the executive directors of three of the group’s member organizations described the situation for over 65.6 million people who have been forced to flee their homes in the past few years. Among those displaced, 77% are women, children and under-aged teens, who are more vulnerable to violence, human trafficking, and potentially fatal health risks. Due to lack of education, they also face more difficulties eventually finding a job.

22.5 million people currently have refugee status worldwide, however, less than 1 percent are ever resettled. Many more spend years in limbo, often living in refugee camps or overcrowded homes. In addition, people of color experience even greater challenges due to discriminatory practices and hostile attitudes.

The all-female panelists had witnessed first-hand the plight of those for whom home is no longer a safe place: Jennifer Butte-Dahl (University of Washington – Henry M. Jackson School of International Studies), who moderated the panel, was on the Greek island of Lesbos during the height of the European migrant crisis; Nicky Smith (International Rescue Committee – IRC) worked in Darfur, Liberia and Northern Nigeria; Chitra Hanstad (World Relief Seattle – WRS) had just come back from Lesbos, after a short stop at the World Economic Forum in Davos; and Jo Lonseth (Extend the Day) recently returned from Bangladesh, where she met with Rohingya refugees.

Jennifer Butte-Dahl (UW) recalled a conversation she had with a refugee family on the island of Lesbos. When asked what their biggest challenge was, the parents said: “Our kids do not have structure. They are turning into maniacs. We need them to go back to school. They need something to do every day. Moving constantly, not knowing what the next day will bring, does not work.”

Multiple reasons for the increasing migration

We are witnessing the worst refugee crisis since the Second World War, and there are several migration routes and multiple reasons why people are fleeing their homes.

Mediterranean: While she was in Lesbos, Chitra Hanstad learned that in the last four years 15,000 people have died crossing the Mediterranean. This year alone already 368 people lost their lives, while 8,090 arrived through different routes in Europe. Refugees travel on three main routes through the Mediterranean to European countries, which are becoming increasingly hostile towards migrants and refugees.

Chitra Hanstad (World Relief Seattle) observed during her recent visit to a refugee camp on the island of Lesbos that “the hope was gone in the people’s eyes because of the lack of clarity about what the future held.”

People from West African countries hoping for better economic possibilities take the very dangerous route from Libya to Italy. Refugees from Iraq, Afghanistan, and Syria, who have fled their war-torn countries, take the more accessible route, Turkey to Greece. The third route is Morocco to Spain, which is considered the least dangerous. Once the people arrive at the shores, they remain for a long time in camps that are notorious for their sexual violence against women and children.

Myanmar: The Rohingya, a Muslim minority in mainly Buddhist Myanmar, fled a brutal ethnic cleansing and are now living in camps in Bangladesh. Jo Lonseth learnt during her last trip to Bangladesh that at the height of the atrocities 20,000 refugees arrived at the camp each day. These survivors – there are 77,000 orphans in the camps – have witnessed the dismembering of their husbands and sons, gang rapes and other unspeakable crimes. Bangladesh, a poor country, provides basic services such as food, water, and shelter for thousands of Rohingya refugees who have no citizenship and can stay on a three-month permit. When so many people are crowded into small spaces, resources such as wood or water are quickly depleted. In the Rohingya camp area there are absolutely no trees or bushes left.

There is no end of people being forced out of their homes due to conflict and/or famine. In addition to the examples mentioned during the event, there are also thousands of Venezuelans fleeing from the economically disastrous situation in their home country to Colombia or Brazil.

Rich countries are increasingly restricting the reception of refugees and migrants

While mainly poorer countries (Turkey, Pakistan, Lebanon, Iran, Ethiopia, Jordan, and Kenya) host most of the world’s refugees, the wealthier countries have been closing their doors. In fact, the very existence of refugee resettlements seems to be in jeopardy right now.

Historically the U.S., which was built by migrants and refugees, invited two-thirds of all the refugees to resettle, while other nations followed their lead. Welcoming refugees has always been a bi-partisan issue and under President Reagan, 100,000 refugees a year found a new home in the U.S. According to Nicky Smith (IRC), refugees on average give back $21,000 in taxes over what they take in benefits. In fact, refugees are paying $29 billion per year in taxes.

This year, the aim was to resettle 45,000 refugees in the U.S., however, Smith estimates that only 22,000 might be resettled, with very few refugees from Muslim countries – this figure has dropped by 94 percent. Further, the number of Syrian refugees accepted for resettlement dropped by almost 100%: just 34 came to the U.S. within the last year.

Nicky Smith (IRC) described the situation of refugees, who can neither return to their homes, nor stay in their host country and await resettlement in a more welcoming place: “There is an Iranian family that is both a religious minority and Kurdish… It is not great to be Kurdish and in Turkey. They cannot rebuild their lives there. They had their flight to the U.S. cancelled three times. They have packed their bags and sold everything… The father is ill and needs surgery. We need to help this family now!”

Especially dire is the situation of 60,000 former local employees of the U.S. military from Iraq or Afghanistan who are waiting to be relocated, while fearing for their own and their families’ lives as they are targeted by extremists. They would leave a comfortable, middle-class life to move to the U.S., knowing that their degree won’t be recognized and they must start anew. However, they do not have a choice as they are in danger every single day.

In this situation, the humanitarian work of non-governmental agencies and non-profits, such as International Rescue Committee, World Relief and Extend the Day is more important than ever:

The International Rescue Committee has several programs that include after-school activities, assisting teachers who teach refugee children, job training and job opportunities (in partnership with Starbucks), housing, activities for senior refugees who have more difficulties coping with the loss of their home than younger ones, and anti-trafficking activities. However, as fewer refugees came to the U.S., the International Rescue Committee had to close 50 resettlement offices and lay-off experienced and passionate staff.

World Relief Seattle runs a legal clinic that supports refugees and migrants in the detention center in Tacoma. It offers summer camps for refugee children and support for refugee women – who are often more isolated than men – to learn English, take driving lessons and receive job training. In the newly established community garden and commercial kitchen, refugees are taught how to start a food-related business.

Extend the Day provides inexpensive solar reading lights in partnership with local organizations. (The partner organization Spreeha from Bangladesh, another Global Washington member, attended this meeting). Especially at refugee camps, light means security, and it allows women, girls and boys to use the restrooms at night, which otherwise is too dangerous. In addition, light gives children the opportunity to study and read after dark.

Everyone can take action

Although the magnitude of the problem feels intimidating, there are steps that everyone can take toward long-term solutions:

The United Nations is preparing a Global Compact on Refugees that aims to improve the situation for refugees over the long-term by easing the pressure in host countries, building refugees’ self-reliance, and resettling or repatriating more refugees and migrants. The UN General Assembly will discuss the compact during this year’s General Assembly.

The best way to prevent future crises is to address problems early-on that force people to leave their homes. Such solutions include promoting democracy, gender equality, human rights, land rights for women, environmental protection, equal access to education, food security, access to clean water and assisting the poorer countries to prepare for climate change. To resolve conflicts, peace talks should include women

To address the current plight of the refugees, priority should be given to assisting refugees returning home or, if that is not possible, to resettling them, rather than having refugees living for years in camps or interim housing in uncertain legal conditions without hope for a better life. As Smith said, “Refugees need more than only to survive, they need to live and thrive.”

Ulrike Hoessle worked with the UN Peacekeeping Mission in Mozambique, where she also oversaw the repatriation of refugees after the civil war in one of the provinces. She worked for several foundations and non-profits on human rights, women’s rights and the environment in Africa and Latin America. In Seattle she consults for WWS Worldwide on fundraising and organizational development. She has a M.A in Cultural Anthropology and a Ph.D. in Political Science.