GLOBALWA.org / Our Blog / The Courage to Persist: Standing Firm in Support of Women’s Opportunities Globally

The Courage to Persist: Standing Firm in Support of Women’s Opportunities Globally

Co-Hosted by Global Washington and Sahar 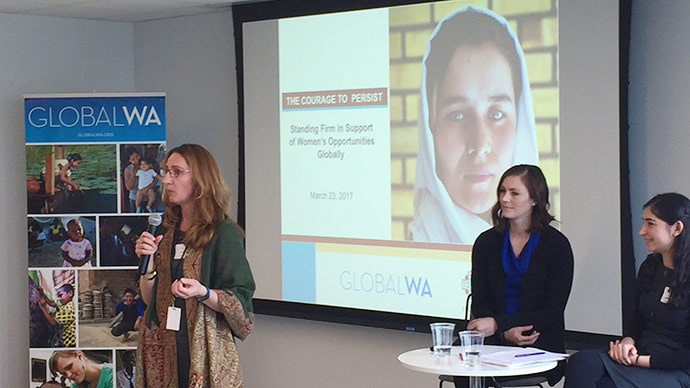 On March 23rd 2017, Global Washington co-hosted an issue briefing with Sahar, addressing some of the challenges facing global women’s empowerment in the current US political climate. Titled “The Courage to Persist: Standing Firm in Support of Women’s Opportunities Globally”, the talk was led by Sahar Afghan Fellow, Malahat Mazaher and Sahar Board Member, Kelsey Noonan and moderated by Ginna Brelsford, Sahar Executive Director.

There were over fifty people in attendance – we had representatives from many different organizations, including Landesa, Camber Collective, Bill and Melinda Gates Foundation, Women’s Enterprises International.

Kelsey began the issue briefing with the question “Why do we need to talk about this now?” She went on to touch upon the dramatic repositioning of America on the global stage – in both the political and philanthropy spheres – and how this has an outsized effect on women and girls. The current Trump administration has put in place a 37% budget reduction for USAID, a heavy-hitter in supporting women and girls. This reduction will take a toll on many global programs. The administration has suggested other countries should step up as the United States step back, but other western nations already give a larger percentage of their GDP than we do. They are unlikely to be able to increase budgets to account for the United States decrease.

While giving in the United States has increased after the November 8th election, this surge in individual philanthropy has been directed primarily to domestic causes. It’s certainly great news that giving has increased, however, Kelsey warned us: “we need to be careful to not build a wall around our own rights, while women and girls in other countries are blown backward by this political wind.”

Malahat then stepped in to provide the context of Sahar’s work. Sahar is closely connected to education as a tool of empowerment. Malahat noted that the Asia Foundation did a population survey from 2006-2009 to find out what was the biggest challenge women faced. Lack of education was cited as the number one barrier to women’s engagement by women. One way to improve quality of life in a developing nation is to educate girls – the status of women is tied directly to the health and success of a country. Education is the greatest success story of Afghanistan. The literacy rate has increased by 10% since 2001, currently at 38%. The Afghan government goal is to be at 59% by 2020. 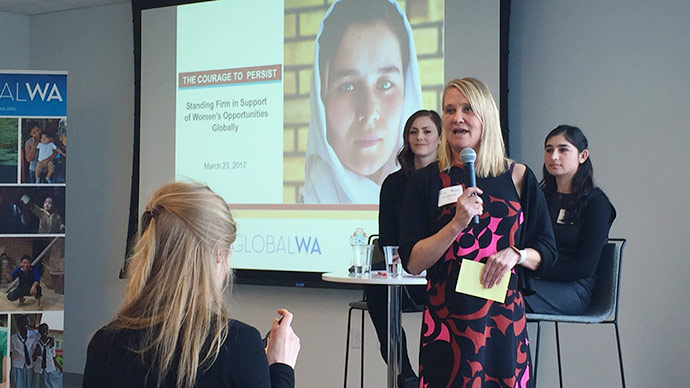 This success is possible because of the commitment of the international community, NGOs and the Afghan government’s’ efforts. It is important to continue this challenging work because Afghanistan is one of the world’s youngest countries. 50% of its population is under the age of 15 and 79% of the population is under the age of 35. Without supporting education, there is an incredibly large amount of lost potential.

Malahat also touched upon education as a bridge to understanding the unknown. Education can help resist preconceived notions, biases and discrimination against any group of people. When people don’t know about something, they fear it. An example of this is Islamophobia and fear of Muslims. Malahat has spent time at various schools around Seattle, teaching classes on Islamaphobia. She noted that “To my surprise, many of the students already knew that Islam is somehow something bad but also that people who practice islam are treated badly/unfairly. We talked a lot about muslim Americans and the scarf/hijab that muslim women wear. By the end of the session, I could see that these students were realizing that there is nothing out of the ordinary about muslims. That’s why we are engaging with schools here because global issues are related to local agenda. It continues to be very important and it’s not at odds with domestic issues. We need to do both.  The prejudice here affects people everywhere else.”

Kelsey and Malahat ended with three takeaways for the attendees, that you can also take into consideration!