GLOBALWA.org / Our Blog / Supporting Women’s Rights in an “Open World” 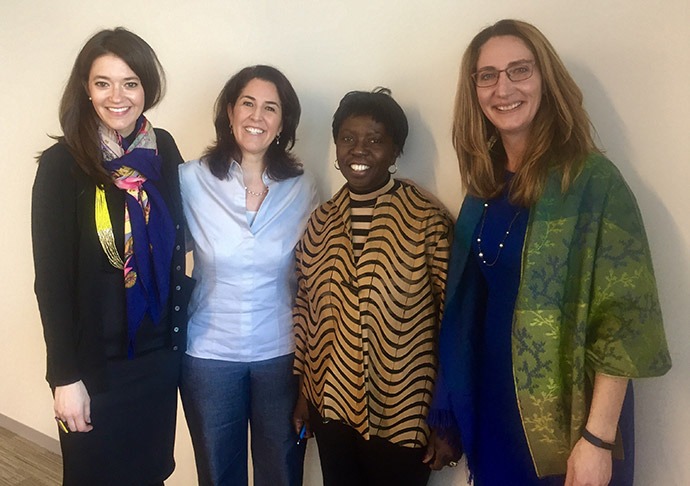 “We’ve opened our eyes to the problems of the world… we are not going back from an open world, and we are not afraid to stand for women’s leadership.”

Seattle Foundation and Global Washington were honored to recently host Dr. Musimbi Kanyoro, CEO of the Global Fund for Women, for a roundtable discussion about the importance of supporting women-led organizations around the world, especially relevant given the current global socio-political climate.

Global Fund for Women was founded in 1987 to channel philanthropic dollars to women-led, grassroots organizations around the world. For 30 years, the organization has seeded movements addressing major challenges facing women and girls from gender-based violence, to legal rights, to economic empowerment, to reproductive healthcare and security. To date, Global Fund for Women has provided over $100 million in grants to organizations working in 170 countries — 100 of which now have policies to address violence against women and 47 of which have inheritance laws. Most recently, Global Fund for Women has focused on “tipping points for women” – or what they have identified as “critical moments for political or social turmoil” – such as the trafficking of women and climate change. Global Fund for Women not only funds movements, but also works to connect organizations and ensure women leaders have a seat at the table. Dr. Kanyoro reiterated the importance of intersectionality within the global women’s movement as well as the inclusion of women of color, indigenous women and others who have the local credibility and leadership needed for these grassroots efforts to be successful and sustainable.

By supporting grassroots, women-led movements, as well as women leaders themselves, Global Fund for Women is filling a critical funding gap for women’s rights internationally. Many surveys on philanthropic trends do not segment data by “women and girls” as a distinct category of impact, but it is estimated that between only 5 and 7 percent of all foundation funding is specifically directed to women’s and girls’ initiatives. Furthermore, it is estimated that only 5 percent of international aid goes to support gender equality as a principal focus. It is crucial now, more than ever, for the philanthropic sector to support efforts focused on gender equality and women’s rights – whether at home here locally, or abroad.

“The world is becoming closer… it is not misplaced to care about what is happening [here] in the US. Awareness of local movements help open us up to other movements,” shared Dr. Kanyoro.

She reflected on the interconnectedness of the world, and how issues impacting women and girls in the United States also affect women and girls halfway around the globe. She joked, “When the United States sneezes, the world catches pneumonia.” As an example of this “open world”, she recalled one of her early trips to Seattle. Prior to her time with Global Fund for Women and the David and Lucile Packard Foundation, in 1998 Musimbi was appointed as general secretary (CEO) of the World YWCA. She shared that as the first non-white woman to hold the role, she led a global campaign that reached as far as the Seattle chapter of the YWCA.

“We’ve opened our eyes to the problems of the world… we are not going back from an open world, and we are not afraid to stand for women’s leadership,” Kanyoro continued.

Enormous thank you to Dr. Kanyoro for sharing her astute thoughts on the state of women’s rights globally and our partners at Global Washington for co-hosting the conversation with us.

Seattle Foundation’s Healthy Community Framework delineates the essential elements of a thriving community and focuses philanthropy toward the greatest impact. Built on eight elements, including Global Giving, the framework acknowledges the complex and interwoven nature of both the challenges and assets in our community. Within the Global Giving element, our team has lifted up four Priority Areas of Impact, including the empowerment of women and girls. We were grateful for the opportunity to learn from a leader like Dr. Kanyoro to inform our work around this critical topic.

To learn more about our Global Giving services, or how you can support women’s and girls’ empowerment internationally through Seattle Foundation, contact Michele Frix at m.frix@seattlefoundation.org.