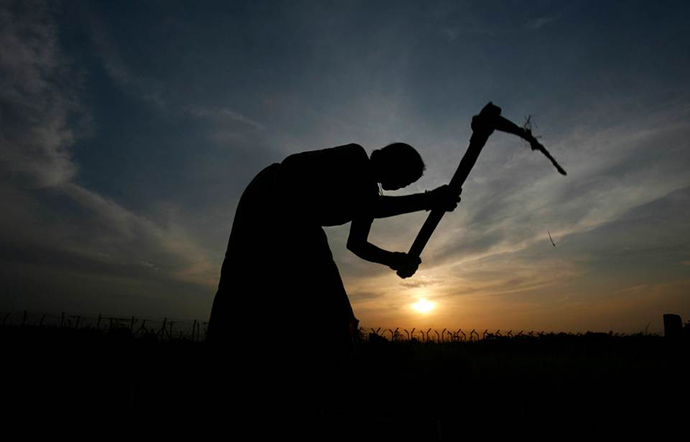 A farmer working in a paddy field is silhouetted against the setting sun on the outskirts of Agartala, capital of India’s northeastern state of Tripura August 9, 2010. REUTERS/Jayanta Dey

As world leaders convene in Paris this week for the 2015 UN Climate Change Conference, it is important that they recognize secure land rights for smallholder farmers – and especially for women farmers – as a critical tool for building a more sustainable planet.

It is increasingly understood that climate change is far from gender neutral. In fact, hotter temperatures, erratic rainfall, and worsening natural disasters ravage rural women in general and women small-scale farmers in particular. They must travel further for water and firewood, struggle with drought-stricken yields, grapple with disaster reduction and recovery efforts that fail to account for their interests and needs, and shoulder increased domestic workload related to climate change.

Government and international response to climate change has also not been gender neutral, exacerbating gender inequality.

Less well known or understood is the fact that rural women are not only those most affected by climate change, but also they can significantly help us address climate change impacts. Women small-scale farmers can be a critical, albeit often overlooked, piece of the climate change puzzle.

As this new infographic conveys, research shows that when smallholder farmers have secure rights to land, they are more likely to preserve the soil, plant trees, and protect forests.

Across much of the world, laws and social norms frequently limit women’s land rights and routinely exclude women from decision-making on land and natural resources. Without secure rights to land, their access and use of land often depend on the consent of male relatives.

As this new call for action makes clear, our collective response to climate change can be more efficient and more effective when we take women’s land rights into account. Secure land rights for women and their meaningful participation in decision-making on land and natural resources must inform ongoing climate change discussions, knowledge-generation, and interventions.

Take this example of women in West Bengal, India, where women recounted the story of an outsider coming to the land they were using and cutting all the trees for wood.

One woman said, “We could do nothing but cry because the land was not legally ours.” In contrast, with legal rights to the land, women’s cooperatives in the Indian state of Odisha undertook the management of what had been considered “waste lands” of the community. Securing these women’s rights to land will equip them to have a greater impact.

Governments and policy makers must understand that rural women are critical partners in developing and leveraging climate change strategies. To be effective partners, women must have secure land rights.