Home / Our Blog / The Global Struggle for LGBT Equality

The Global Struggle for LGBT Equality 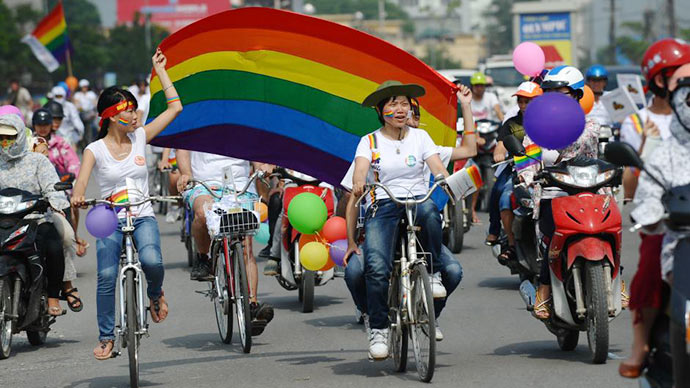 For far too long, the international development community has seemed to ignore those who do not fit socially prescribed gender and sexual roles, leaving them to endure social and legal persecution. To holistically combat global poverty, development practitioners must address the often violent forms of repression plaguing the LGBT community.

On May 13, the University Of Washington’s Jackson School of International Studies, a Global Washington member, collaborated with Crosscut and the World Affairs Council to host a panel on the global struggle for LGBT equality. Global Washington was a promotional partner for the lively discussion.

Panelists included: Anthony Adero, a LGBT activist from Kenya; Jessica Stern, President of the International Gay and Lesbian Human Rights Commission (IGLHRC); Marsha Botzer, a transnational trans activist; and Angeline Jackson, Executive Director and Co-Founder of Quality of Citizenship Jamaica. Amie Bishop, Board Co-Chair of the IGLHRC, moderated the discussion. Audience members quickly learned that, while there is still much work to be done to ensure equality to the LGBT community, there is progress happening.

Bishop kicked off the discussion with the statement, “Nearly 80 countries criminalize acts of homosexuality, and seven deem it punishable by death.” As the audience took a collective heavy breath, Stern quipped, “The government can be the biggest challenge for the LGBT community.” This is known as repressive power — power held by the state and exercised upon the individual by silencing, punishing and discriminating. Repressive power is mainly visible through the actions of the police, the courts and the army.

In 2005, Saudi Arabian police officers arrested 100 people for the crime of “dressing and behaving like women.” The courts found them all guilty and sentenced them to imprisonment and flogging. In 2006, twelve men were jailed in the United Arab Emirates for preparing an illicit gay wedding and for donning women’s clothing. These are just two examples of police officers punishing LGBT persons for expressing their identity in private spaces. State security agencies continue to take extreme measures to enforce bigoted laws intended to keep LGBT persons off the streets and out of mainstream society.

Even in countries where LGBT persons are given protection under the law, police officers and courts still do not always uphold procedural due process. South Africa recently passed constitutional protections for those who identify as gay or lesbian. However, these constitutional rights did not protect Thapelo Makutle, a South African transgendered person, who was murdered by two men after a confrontation over Thapelo’s sexual orientation and gender identity. Local authorities did not consider the incident a hate crime and the two transgressors went unpunished. South African LGBT activist, Junior Mayema, responded to Thapelo’s murder saying, “The police have little or no training on hate crime which leads to many cases being either not investigated or ignored.” Constitutional protections are impactful insofar as they are implemented and enforced. It is clear the South African government does not offer LGBT citizens the same protections as their cis, heterosexual counterparts.

Other forms of discrimination, such as in employment, healthcare or education, are influenced by a different type of power than a repressive one. Rather than power held by the state and implemented from the top down, this power is held by no one yet practiced by everyone, to operate from the bottom up. This is discursive power — the power of society to produce individuals with specific bodies that identify with pre-described binaries. Discursive power is what pushes men to be manly and women to be feminine. Where gender and sexuality is concerned, discursive power can be even more troublesome than regressive power. The United Nations cannot simply pass a law against this type of power; instead, activists must change the hearts and minds of people throughout the world to make people aware of how this power is destructive and how their actions perpetuate it.

Discursive power is evident in Latin America, where LGBT persons often have to choose between enjoying their sexual and gender identity and preserving paid employment. Marta, a bookstore cashier in Bolivia, detailed her experience as follows. “In my free time, I like to coin phrases and write poems on lesbian topics. Some of my co-workers took the notebook from my till and showed it to the staff manager. He said I should be thankful he had not told all of my colleagues that I was a lesbian, and I would be better off leaving right away and not complaining.”

Adero, the gay Kenyan man on the panel, added that another field riddled with institutionalized discrimination is healthcare. He went so far as to credit the healthcare system with exacerbating the dehumanization of homosexuals. It begins with the medical language; men who have sex with men (MSM) is a reductionist term ubiquitous in the global south’s public health system. Adero finds the term MSM problematic because it “obscures social dimensions of sexuality,” under-representing sexual variance.

“What can we do, as white people, to directly promote LGBT rights on a global scale,” asked one man in the audience. Jackson, a Jamaican lesbian, took the mic and reiterated what Malcolm X once said in response to a similar question. “You can’t.” She went on to qualify the statement by saying that “Jamaicans like white people, so long as they aren’t telling us what to do.”

The international development community has an opportunity to make a lasting impact on the lives of LGBT persons worldwide. This starts with aid workers addressing LGBT communities with all forms of poverty alleviation. Public health organizations must expand from just HIV/AIDS prevention to address all forms of sexual health. This means changing the goals of sexual health to encompass emphasizing the rights of everyone to enjoy a pleasurable and safe sex life free of prejudice. But public sexual health must go further than this; sex is also about the political, social, religious and economic structures that strongly influence physical expression and personal intimacy. A holistic goal of sexual health must include letting people walk the streets free of abuse, harassment and unwanted sexual attention.

The development community must reduce discursive power by increasing visibility of LGBT persons. In fact, all panel members stressed the importance of visibility. Botzer, a transgender woman, cited that 60% of Americans personally know someone who identifies as gay, while only 8% know a transgender person. Botzer credits the rapid legalization of gay marriage in the United Starts to this widespread visibility of gay people. So, to combat traditional sexual and gender norms across the world, LGBT persons have to make themselves visible to change the hearts and minds of their friends and family.

One of the easiest ways to help is to donate to local activists who have the power to speak to their communities without imperialist voices. Many practitioners do great work in the global south alleviating poverty and working on global health and education. However, many of them bring western bias, reinforcing local prejudice and sexual and gender roles, keeping LGBT populations out of the greater community. These practitioners must keep providing the lifesaving aid, but they must also be conscience and inclusive of LGBT persons. Although local groups can take a lead role, the development community can supplement and reinforce efforts by creating safe places for everyone.

International support has proven beneficial to domestic LGBT movements. The United Nations has been crucial in creating awareness on LGBT rights. The Heinrich Boll Foundation based in Germany supported Helem, a local Lebanese organization that provides medical assistance and sexual health information to LGBT persons. IGLHRC has supported groups throughout the world in raising awareness for LGBT rights. If the development community worked with international agencies to focus on providing local LGBT groups with the resources they need to change the hearts and minds around them, many LGBT persons would be empowered. Local environments would be safer for LGBT persons allowing for people to publicly challenge traditional gender and sexual roles. As visibility increases, more people personally know a sexual or gender non-conforming person. Societal pressures would decrease and laws would follow public opinion accordingly.

The international development community cannot wait to address the needs of LGBT persons. We can encourage all communities to see people for who they are, to cease fleeing from reality and begin to change the world.