Home / Our Blog / If Not Technology, What?

If Not Technology, What?

After moving away from Seattle last December, Toyama will be back in town for book talks at Seattle Town Hall on June 22, and University Book Store on June 24. His book, Geek Heresy: Rescuing Social Change from the Cult of Technology, goes into greater detail about what he writes below. 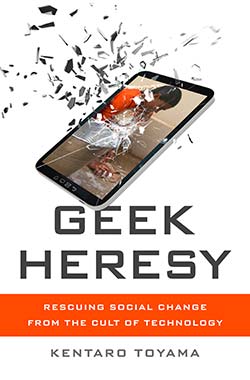 In India’s famous Hole-in-the-Wall project, ruggedized computers were placed in slums and rural villages for neighborhood children to use. Its founder, Sugata Mitra, claimed that with no supervision, children taught themselves computer literacy, English, and even molecular biology. Back in 2005 before the project became widely known, Mitra came to speak to a group of us about the project. We were a new research team in Bangalore that I had started while at Microsoft, with a mission to explore how digital technology could serve international development.

Inspired by Mitra’s vision of “minimally invasive” education, several of my colleagues started a similar project called Kelsa+ for adults. They installed a PC with broadband in the basement of our offices, and told the low-income service staff – technicians, housekeepers, and security guards – that it was theirs to use as they wished. The expectation was that with free access to the Internet, the staff could gain something of productive value – take an online course, study English, search for better jobs. (Kelsa+ means “work plus” in the south Indian language of Kannada.)

After several months, surveys were administered and usage data was collected from the machine. Analysis revealed that just like the children of the Hole-in-the-Wall computers, the adults quickly picked up the basics of computer use without formal instruction. Those who had prior experience with PCs taught the others. The staff sent one another short e-mails; they took photos with the webcam; and they used Google. And, they liked it. The PC got around ten hours of use a day, which was considerable given that the staff only used it in their off hours. One worker said, “In all my service, this is one of the best workplaces I have seen.”

The bad news, however, was that usage was limited to the men and it didn’t go beyond easy entertainment. Watching movies was the most common activity, and the way Kelsa+ users searched online revealed their shallow grasp of computing: Whenever they Googled anything, they’d add “.com” as in “movie Baassha.com.” Some of the staff voiced a desire for English-language instructional material, and relevant software was provided. Still, there was little use of it, and an assessment showed no significant gain in English ability.

These outcomes recapitulate what is known about telecenters (neighborhood Internet stations meant to serve social causes) as well as the original Hole-in-the-Wall project: When impoverished communities with little formal education or political power are given free access to the Internet, they don’t get a lot out of it. Though Silicon Valley social entrepreneurs imagine they can change the world with a few apps, technology by itself doesn’t give anyone the education, the social capital, or the economic power that people need for real change. Even the original Hole-in-the-Wall claims turned out to be hype. Researchers who have visited the sites months after installation find them in disrepair, with local adults having little memory of the computers other than teenage boys playing video games on them.

Over five years, I oversaw dozens of projects applying PCs, mobile phones, and custom electronics, to problems in education, agriculture, healthcare, governance, and microfinance. When I looked back to consider what differentiated the impactful projects, I found that it wasn’t the technology that mattered, but our partners’ dedication to social impact. Wherever the stakeholders were well-intentioned and capable, technology provided a positive boost; but where human institutions were corrupt, dysfunctional, or absent altogether, no amount of incredible technology turned things around. Technology’s primary effect wasn’t to add a net benefit, but to amplify underlying human forces.

Amplification explains how it’s possible for technology to aid us in our personal lives while it fails to have value for others. We (that is, anyone likely to be reading this post) have the education, the economic means, and the social ties to capitalize on today’s incredible tools. In the same way that a power saw has different outcomes depending on whether it’s wielded by a professional carpenter or a novice, digital technology has different impact depending on whether its users are college-educated knowledge workers or urban migrants with a fourth-grade education. 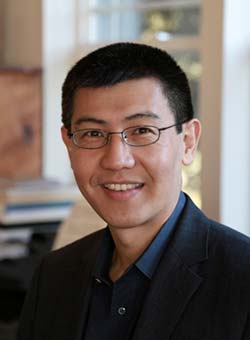 This is starkly illustrated even in the United States by the fact that over the last four decades, we have experienced a golden age of innovation in which digital devices have penetrated every corner of the country. Yet, during that same period of time, poverty hasn’t declined and inequality has skyrocketed. Any idea that better technology more widely disseminated is a cure for poverty demands reconsideration.

What amplification ultimately says is that in a world of abundant technology, genuine human development should be our focus. Kelsa+ had one unexpected but very positive outcome: One of the security guards had been enrolled in an evening data-entry class. Since he didn’t have a PC at home, he used the Kelsa+ computer to practice his skills. One day, he handed in his resignation – he had passed his certification and had been offered a job as a data-entry professional, which offered far greater future prospects. Most of all, he was proud of the social standing it brought him: “Today I can stand up in front of my father and friends and say that I am no more a watchman, but I am doing a computer job.”

It’s easy to mistake this story to be one about technology, but look more closely, and it’s a story of genuine human development. Computer access mattered of course, but it didn’t result in a change for everyone. It had impact only where motivation, instruction, and encouragement converged. These are human qualities that gadgets just can’t deliver.

In my book, Geek Heresy, I tell stories highlighting what I think of as “heart, mind, and will.” Many have a Washington state connection: How, as a teacher at Seattle’s Technology Access Foundation, I had to change myself before my students could learn computer programming. How Ann Downer at the University of Washington mentored a low-income chauffeur in India to become the facilities manager for I-TECH’s India office. And, how Patrick Awuah’s transformation from Microsoft program manager to Ashesi University founder is changing the course of West Africa. What these stories reveal most of all is that there is no social change without change in people.