GLOBALWA.org / Our Blog / Oxfam to Launch Global Initiative on Inequality This Fall

Oxfam to Launch Global Initiative on Inequality This Fall

Most people know the big international anti-poverty organization Oxfam for its work on global food security and finding ways to feed the estimated 1 billion undernourished people on our planet. It brings its work on social justice, disaster relief and foreign aid reform to bear on this problem and others.

This November, Oxfam will add the broad topic of “inequality” to its global portfolio of initiatives that now includes agriculture; climate change; conflicts and disaster; health and education; and trade.  Raymond C. Offenheiser, President of Oxfam America, gave a Seattle audience a brief, sneak preview of the new initiative at a reception for him and several Oxfam officials on July 7 while they were in town for Gates Foundation meetings. The reception was organized by Seattle-based Jonathan Scanlon, Senior Advocacy Advisor, Oxfam America, and cosponsored by Global Washington.

Offenheiser said much of the initiative on inequality will focus “on how do we ensure that future populations will have the same opportunities that many of us have for education, access to health, access to environmental services. There will be ample investments being made in many of these countries to enable them to have the chance to work their way out of poverty and to have the kind of social mobility that we have enjoyed in this country.”

Part of the challenge, said Offenheiser, is “how do we work collectively so that the benefits of development are flowing broadly and more equitably than perhaps they have in the last decade or so?” 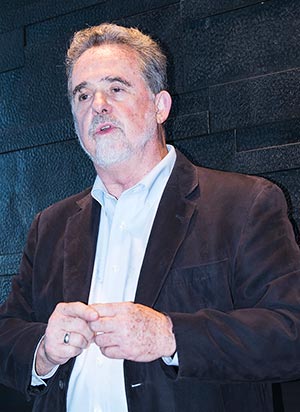 Oxfam gave a hint of this new direction during January’s annual World Economic Forum in Davos, Switzerland, when it released a study that found that the world’s 85 wealthiest people have the equivalent assets of the poorest 3 billion. That statistic and resulting news coverage went viral; Oxfam’s website recorded 96 million hits as a result, according to Offenheiser. “This is an issue that is becoming somewhat mainstream but there is a lot of work to be done on that,” he said.

Kevin Rousell is Oxfam’s head of inequality, financial development and essential services campaign. He was one of about a dozen Oxfam officials in Seattle for the Gates Foundation meetings. Rousell is based in Cape Town, South Africa, “one of the most unequal nations in world,” according to Rousell. “Apartheid ended in 1994. South Africa is more unequal today than it was then.  We consider that immoral; we consider that something to fight against.”

Oxfam is one of about a dozen “anchor partners” funded by the Gates Foundation to work on major issues such as agricultural development in Africa, extractive industries and reform of the U.S. foreign aid system.

On the latter, Offenheiser said, “Oxfam believes we are at a turning point in the whole history of foreign aid. The kind of assistance our government has historically provided is diminishing as a percentage of the investments that are going into many poor countries.  We all need to begin to focus on where is the new money going to come from? Many of the countries we work in have mining companies, they have oil, gas and minerals and there is a lot of wealth coming from those sources. Our objective there is can we actually ensure that some of that wealth, some of that new money coming in from taxes and royalties to governments, become development funds?”

Foreign direct investments from corporations and remittances home to families are other potential sources of aid revenue. “It could even mean that Oxfam will work on tax reform in developing countries so that, at the end of the day, we would be working ourselves out of a job because the revenues for development would be coming from the countries themselves rather than from American taxpayers.”