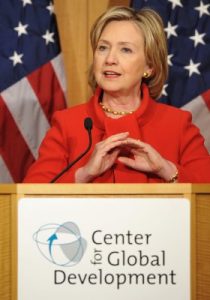 Hillary Clinton made a speech on development reform yesterday that is well-covered in the media.  You can read commentaries on the speech by Nicholas Kristof in the New York Times, William Easterly in Foreign Policy Magazine, blogger Chris Blattman, Devex (for the development worker perspective) and others, like this article on how not only are women the solution but men may be the problem in developing countries.

I agree with the eternal development policy critic Bill Easterly in that by covering so much ground and not focusing on what she sees as the most important reforms, Clinton has not really given us much information on what she plans to do with USAID and development in the next year.  Her discussions of the importance of development to international security and the need to focus on women and girls stand out to me.   She also said a lot about coordination, but I don’t really see any new ideas or commitments to actually coordinate anything.

Rather than give you a summary or a more studied critique of Clinton’s speech, I’d like to look at it from the perspective of Global Washington’s four principles of aid effectiveness.  This may be the first you are hearing about our principles.  Last year, Global Washington conducted a survey of our mailing list to see what they thought were the important issues in foreign aid reform.  We also convened a working group of experts from diverse organizations to come up with principles for aid effectiveness that could be used to guide foreign aid reform.  Our principles for aid effectiveness are: (1) Transparency and Accountability; (2) Consolidation and Coordination; (3) Local Ownership; and (4) Targeting.  We have also written a White Paper explaining these principles and using them to assess and make recommendations to improve U.S. foreign aid.  You can access that White Paper here and more information about this project here.

First, Transparency and Accountability.  Clinton talked about the need to share proof of progress in development with the public.  She also talked about monitoring and evaluation.  She made the point that is often made that the public believes much more taxpayer money is spent on development than is actually the case- in countless surveys, people have said they think that 10 to 20 percent of the U.S. budget goes to foreign aid, when that figure is really below 1%.  If we were more transparent, we could disavow people of this notion, and there would be more support for U.S.-supported foreign aid.  Also developing country nationals often tell Clinton that they were not aware of what the U.S. government spends money on in their countries, while they can list specific buildings and roads built by the Chinese or other donors.  Clinton could have been more specific about initiatives to be more transparent and accountable to both the public and the people in developing countries.

Second, Consolidation and Coordination.  Clinton had a lot to say about coordinating development across sectors, such as health and trade, and with defense operations.  She talked about the need for USAID and State to have the staff to design, implement, and evaluate its programs, which would help with coordination.  She also thinks coordination should be done on the country level- often the ambassador in a country does not know all the USG development folks there.  She did not mention people outside the government, but I think that would be the next step, to at least know who is doing what both within and outside the government.  Global Washington considers policy coherence to be an important part of consolidation and coordination- development must be a consideration in policy areas where development experts do not traditionally have a voice, such as trade and energy policy.  Clinton’s discussion of bringing development experts together with the military leaders in Afghanistan and Iraq is germane to this issue, but she didn’t go further to policy coherence in areas outside defense.  During the Q&A she was asked a pointed question about trade and she hinted at the importance of trade policies for development, “in some of the sort of free trade agreements that we’ve entered into in the last several years, the benefits have not really been broadly distributed… So I think we need to enter into a new trade agenda with as many lessons learned as possible.”  But we would like to see more about policy coherence.

Third, Local Ownership.  Clinton quoted President Obama, “we are adopting a model of development based on partnership, not patronage.”    She talked about working case-by-case, country-by-country.  But as William Easterly pointed out in the Foreign Affairs opinion piece, she did not mention the inherent conflict between local ownership and evidence-based development programs.  Even when she was asked about this conflict during the Q&A, she kind of skirted the question by saying that we needed both.  This is a difficult question, and I don’t have the answer, but I think that you need to at least admit there is a conflict in order to have a vision that you can honestly follow.

Lastly, Targeting.  Global Washington members want foreign aid targeted at the most poor.  Clinton made no mention of this in her speech, though she did discuss targeting women and children at length.  She also said that we “have to be selective and strategic about where and how to get involved,” whether it’s to improve long-term security in places torn by conflict, or to further progress in countries that have become regional anchors of stability.