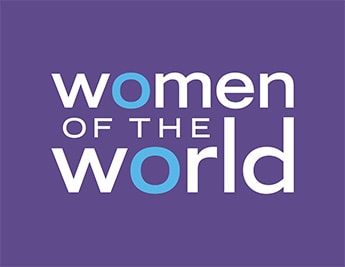 Global Washington’s annual Women of the World breakfast took place on November 15, 2019 in downtown Seattle. The morning marked the second time the event has been held since Seattle International Foundation transitioned it to Global Washington in 2018. The breakfast exists “to celebrate Washington state’s philanthropic role in global development,” and this year, it spotlighted the need to uplift strategies that aim to end violence against women globally.

Kristen Dailey, executive director of Global Washington, commenced the breakfast’s formal program with a welcome to the more than 200 philanthropists and community leaders present, and expressed gratitude to the event’s co-host, the Seattle Foundation and multiple sponsors – corporations, foundations and individual donors. Kristen assured the audience that the morning’s speakers would leave them inspired to engage with one another in the interest of ending violence against women. 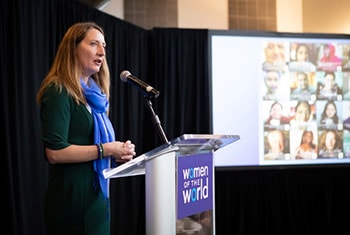 Executive Director of Global Washington, Kristen Dailey, greets guests at the start of the 2019 Women of the World breakfast.

The program began with Dr. Aisha Simon, the chief learning officer for Axiom Learning and a board member of Every Woman Treaty. She described how the massive shortcoming in protecting women had enabled the systematic rape of over 26,000 women during the Bosnian War, one of many instances where unthinkable violence had been used as a weapon to dehumanize and terrorize women.

When she traveled to Bosnia in 1997, Aisha had been a young, enthusiastic medical student with the hopes of doing something to alleviate the situation there. It was a chance encounter with Sarah, a woman whose daughter and herself had been sexually assaulted by soldiers during the conflict that shaped the eventual course of Simon’s life.

“I threw myself into anything and everything that would make a dent in this issue, big or small,” she said. Sarah’s question to Simon, however, persisted to poke at her like barbed wire. “Where were you?”

Aisha continued asking herself how she could make a difference. 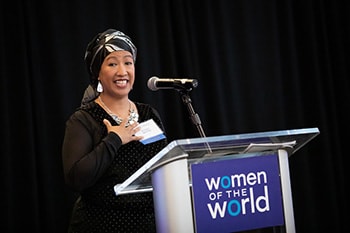 With violence against women and girls being the number one public health threat facing humanity today, Dr. Aisha Simon asks the audience to reflect on how this issue has touched the lives of those in attendance

Her answer came through advocacy work for survivors. As part of this work, Aisha went on to be a founding member of the humanitarian relief organization Doctors Worldwide and continues to be an active member of Physicians for Social Responsibility and Physicians for Human Rights. However, the more involved she became in advocacy work, the more she realized that this issue touches so many lives worldwide.

“Violence against women and girls is the number one public health threat to humanity today,” Aisha said. “As a global community, we face a choice: We can choose to keep spending a disproportionate amount of time and resources on reactively responding to helping women and girls over and over again. Or, we can proactively choose to support proper legislation, education, support, and funding in place to prevent these tragedies from happening again.” 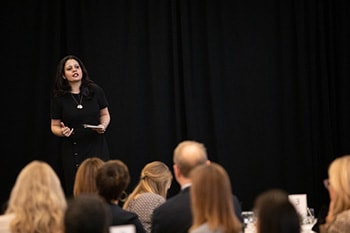 Keynote speaker, Zainab Ali Khan, urges the audience that there has never been a better time to advocate for the end of violence against women.

“If you asked me when my fight for survival began, I would tell you it was in my mother’s womb,” said Zainab. A founding working group member of the Every Woman Treaty, Zainab gripped the audience with her powerful account of how violence against women had affected her own life. She characterized the world of difference that exists between Pakistani men and women, despite living in the same country.

“As a girl growing up, I would stifle my giggles, while my brother’s loud laughter echoed throughout the house. I prayed for a good husband, while my brother prayed to get into a good Ivy League college. I hid every part of my body that could possibly arouse desire in men, while my brother roamed around in shorts.”

Zainab went on to describe the heart-rending ordeal of being sexually assaulted at only eight years old by her family’s driver, and the subsequent years of agony that stemmed from this experience for her. “While there were no consequences for my perpetrator, there were many for me. I had to ride in that same car with that driver for years. I had to ride in the same place where I was sexually assaulted. He would watch me in the rearview mirror and smirk. I had to come into close proximity with him every time he opened the car door.”

Dismantling “the culture of impunity that her perpetrator basked in” would eventually go on to define her life’s work as a tireless defender of women’s rights in her country, where an astounding 93% of Pakistani women experience some form of sexual violence in the public domain. Zainab remarked that it is a privilege to work for women who have the courage and tenacity to speak out against the unspeakable violence they have endured, and who now face a life of uncertainty and terror for breaking the silence.

As a woman who has survived violence, Zainab understands the harm and why it must end. “I want to live in a world where governments are held accountable for the protection of women and girls – that they owe us,” she asserted. “And I will do this work every day until it’s done. I hope you will join me.”

Fidelma McGinn, the chief philanthropy officer for Seattle Foundation, then introduced the featured philanthropist at this year’s breakfast, Leslie Decker. A leading advocate for women both here and abroad, Decker shared some harrowing statistics on violence against women around the globe: 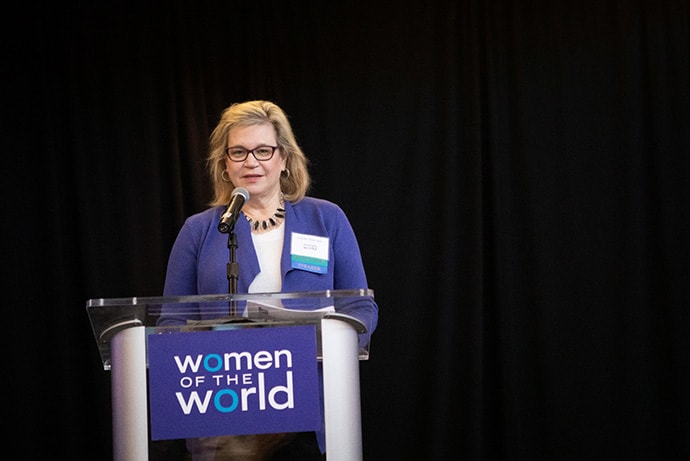 Leslie Decker shares with the crowd a call to action to invest in women.

Acknowledging that initiatives focused on the education and empowerment of women and girls will have more of an impact if violence against women is addressed within a broader scope, Leslie recognized four organizations that have influenced her own views on these subjects:

In coordination with Leslie’s and Zainab’s call to action, attendees at the breakfast each received a copy of the People’s Call to Nations from Every Woman Treaty. At the end of the event, Zainab, Aisha, Leslie, and Kristen stood together on stage to read aloud the articles of the treaty, followed by a symbolic signing of the documents, adding 200+ new voices to the call for a legally binding global treaty to end violence against women and girls.

The program concluded with closing remarks by Kristen Dailey and each attendee received a copy of the 2020 Global Philanthropy Guide, a collaboration between Seattle Foundation and Global Washington.

All photos by Megan Swann for Global Washington.

Stephanie Stinson is an international development practitioner whose primary focus is in the human dimension of environmental sustainability, or simply put, how people can better engage with the planet. Stephanie holds a master’s degree from the University of Washington in environmental policy, specializing in international development. She has seven years of experience in program facilitation and community engagement throughout South America. When she is not fighting the good fight, Stephanie enjoys visiting Green Lake Park, making music with her partner, and working on her latest craft project.