Securing the Global Food System in a Pandemic 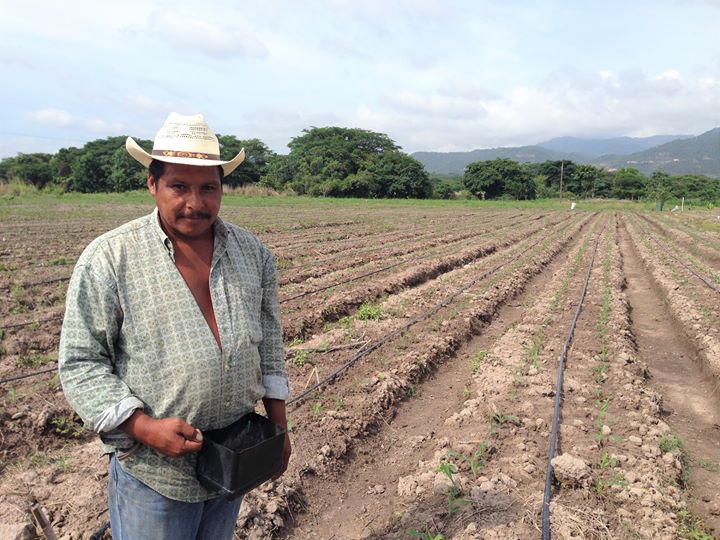 Augusto Cardona, an Agros partner in Nuevo Amanecer, Honduras, stands in front of his empty field in 2015. He later planted it with corn. Credit: Cesar Velasquez, Agros International

As COVID-19 silently snuck around the world in early 2020, the World Food Program (WFP) was responding to another threat as it used its massive logistical network to bring food to 113 million people. From a hunger perspective, 2020 was already a challenging year with conflict, drought, climate change effects, and massive swarms of locusts plaguing the most food insecure. Given the scope and timing of COVID-19, observers around the world are concerned that this global pandemic will soon lead to a hunger crisis, a “crisis within a crisis.”

In the best of times, food security is complex and involves many actors, systems, and value chains. Long-term efforts aimed at shoring up the rights of small-scale farmers, increasing agricultural productivity and access to markets, and bolstering small-and-medium food production enterprises (SMEs) have all contributed to gains, though the 2017 State of Food showed an increase in those experiencing food insecurity from 815 million to 821 million after decades of decline. Of course, food security is not only about quantity but also quality of food. Malnourishment is already a significant issue for many, and the leading cause of death worldwide. The WFP says COVID-19 could double the number of  people with acute severe insecurity by the end of 2020, to 265 million, compounding the number of people made more vulnerable to disease.

While essential, the efforts to contain the virus are already increasing food insecurity. Low- and middle-income countries dependent on commodity imports are particularly at risk. Now largely closed, local markets that sell the majority of food available in many urban and semi-urban locations are an important income source and access point for those without reserves. The closure of restaurants and street vendors deals a particular blow to producers of highly perishable fresh meat and fish. School children are going hungry. For informal sector workers—which make up 60% of the world’s workforce—not working doesn’t feel like an option. As a program manager for World Concern recently relayed, “People are not scared of the virus, they’re scared of not having food.”

Even in an unprecedented pandemic, earlier crises offer lessons. The 2007-2008 food price crisis was worsened by staple crop export bans, which contributed to the doubling of global food prices. During the 2014-2016 Ebola outbreak in West Africa, markets were closed and farmers, laborers, and purchasers were quarantined. The result was significant harvest reductions, steep food price hikes, and accompanying hunger and malnutrition.

Food security relief efforts must be immediate and long-term, as well as global and local. Options exist to relieve struggling economies, as Oxfam pointed out in the run-up to the spring meetings of the G20, World Bank, and IMF when they released a brief titled an “Emergency Rescue Package for All.” Their $2.5 trillion plan calls for direct cash grants to all who need them, immediate suspension of debt payments, and more development aid. While advocating for system responses at the multinational level, in their own programming Oxfam is increasing cash grants, food assistance, and humanitarian aid.

Although the Bill and Melinda Gates Foundation’s work has shifted “almost entirely” to addressing COVID-19 in a clear-eyed effort to serve its core goals long-term, the foundation is calling for an “immediate and aggressive large-scale intervention” to combat both the East African locust infestation and disruptions to the global food trade, caused by COVID-19-related border closures and trade restrictions. In February the foundation contributed $10 million to the UN Food and Agriculture Organization (FAO) to combat the East African locust outbreak and it is calling for others to join.

Food systems already on the verge of collapse have lessons to share, as well. Future of Fish, which works to restore sustainable fisheries, is working now to support communities that might otherwise practice overfishing, which often occurs after an economic hit. The organization is supporting fishers by facilitating digital direct sales to consumers in Chile, re-aligning supply chains and processes in Peru to increase the flow of fish from fisher to consumer, and supporting the demand for fish in Peru and Belize.

At the farm level, COVID-19 arrives at a challenging time for those preparing to sow their fields for the spring season. Even though global supplies of cereal staples are adequate, losing future harvests could draw out suffering. Farmers need inputs now, which are hard to come by due to decreased mobility. In Central America, where Agros International works to secure land tenure and build self-sufficient farming communities, the corn-planting season has begun. Agros is providing seeds, fertilizers, and other inputs to ensure a productive harvest for rural farmers who are otherwise cut off from supply chains and in danger of experiencing prolonged hunger. 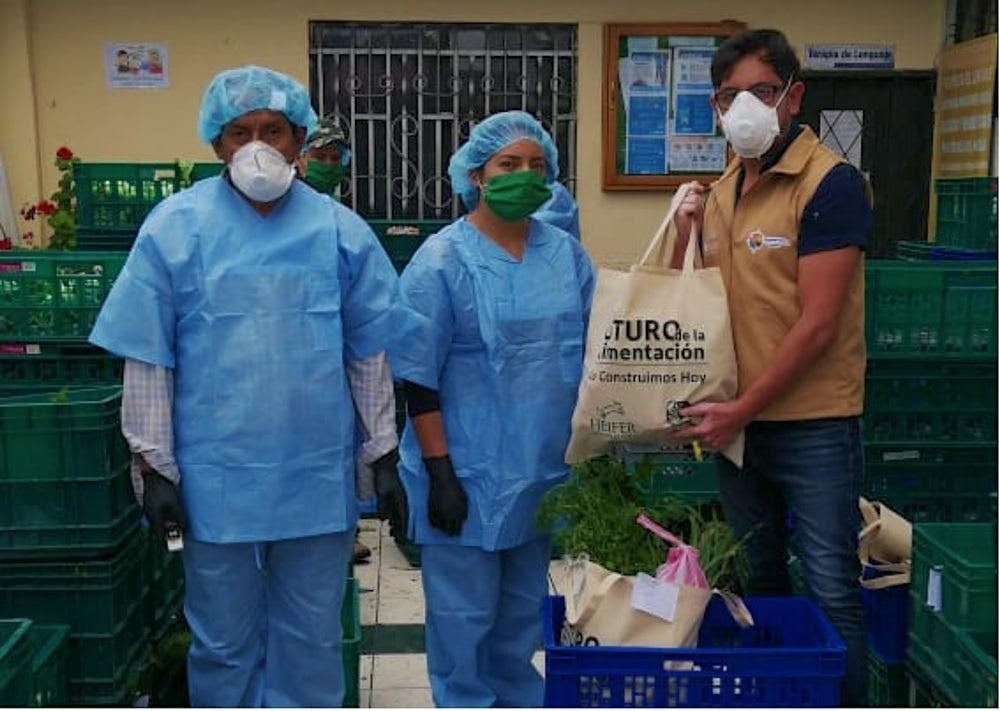 Among farmers in Ecuador, entrepreneurship has been allowed to take hold. A Heifer International project in Ecuador called The Future of Food started connecting rural farmers with markets and consumers in late 2018. When quarantine began this March, these farmers started delivering baskets of produce to urban families. Heifer partnered with PideUnDoMi, an app that connects farmers to consumers to streamline the process.

Until a vaccine is developed and distributed, the world must keep producing and distributing food and finding new ways of doing business. Digital technology has already contributed in numerous ways to positive outcomes in agriculture. Tools like Amplio’s Talking Book can be scaled even further to deliver “actionable knowledge” through the stand-alone audio device. Talking Books are currently being used in Ghana to share virus information through community health nurses in low-literate communities. In the near future, the technology could prove useful to enhance agriculture training, as it has been used in the past with significant effect.

Digital information-gathering by cell phone and sharing via social media and other means will be an important tool to track emerging food supply constraints and hunger zones, which then can be shared with governments and aggregators like the Agricultural Market Information System, or AMIS. International NGOs already connected to staff and partners by technology like WhatsApp and video conferencing are well-placed to collect and share information widely as The Hunger Project, Earthworm Foundation, and others already have done.

Food security relies on free flow of information, goods, and people, but it also depends on a web of rights, norms, laws, and relationships—some more equitable than others. The right to own land and to have that right protected is the underpinning of a functioning food system, and women-owned land in particular has been shown to lead to more food spending and better outcomes for children. Landesa is acutely aware of the potential for land-related conflict, and particularly the risk to widows of land grabbing. The organization is poised to use its expertise to advocate for vulnerable landholders and ensure property rights are enforced.

Secure land rights are the backbone of small-scale farmers’ security, but farmers also need fair prices, living wages, and diversified income streams to withstand shocks in local and global food prices. As an organization committed to sustainable livelihoods, Fair Trade USA has a unique tool to support communities: community development funds, a premium from the sale of fair trade goods, which they quickly make available for communities to use for emergency needs.

Communities affected by COVID-19 also need to be able to self-advocate. The Hunger Project’s Movement for Community-Led Development (CLD) has provided a platform for community members to develop a cohesive advocacy strategy on COVID-19 through 11 CLD national chapters and a global management body. In this way, local communities have organized and advocated across many levels of government for community-led approaches to pandemic response.

While COVID-19 threatens the health and security of the world, it also shows the strength of existing approaches to fight hunger and even offers the opportunity to expand the work of building sustainable, people-centered, and climate-smart agricultural and food systems.