GLOBALWA.org / Issue Brief / Equipping Refugees and Other Displaced People with the Tools Needed to Survive a Pandemic 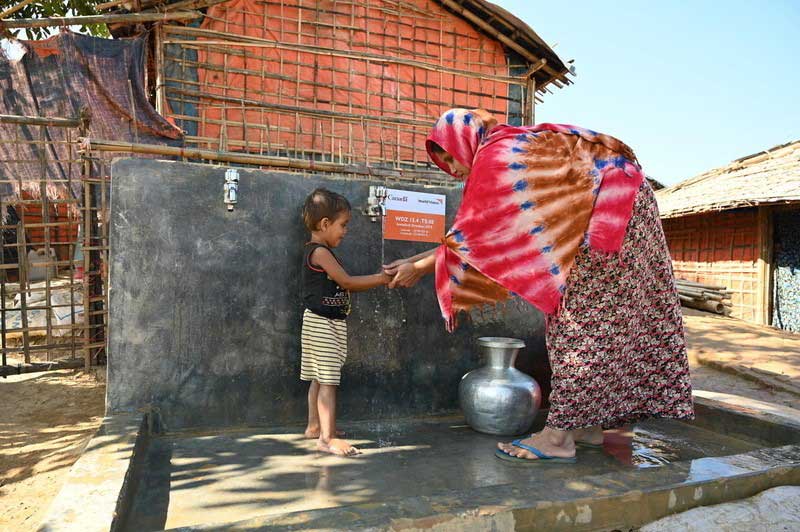 Shahanara, a mother of three, collects potable water and washes her children’s hands at a water point installed by World Vision inside a refugee camp in Rohingya. Photo: Himaloy Joseph Mree ©2020 World Vision.

Everyone is feeling vulnerable and uncertain during this global COVID-19 pandemic, but perhaps none more so than those who were already among the most vulnerable people on earth: refugees and other displaced people. As Europe and the U.S. approach their peaks in new cases and deaths from the novel coronavirus, outbreaks are just now beginning to be reported in migrant facilities and refugee settlements. But because of their already-existing vulnerabilities, people who live and work in those places are anticipating far worse outcomes if major outbreaks hit – and right now, it only seems like only a matter of time.

According to the UN Refugee Agency (UNHCR), 70.8 million people around the world were forced out of their homes due to persecution, violence, conflict, or human rights violations by the end of 2018. This figure includes 25.9 million refugees and 41.3 million internally displaced people (IDPs) who, unlike refugees, have not yet crossed a border in search of safety. More than 80 percent of the world’s refugees and almost all IDPs are hosted in low- and middle-income countries.

What does that mean amid a global pandemic? For one thing, most of the safety protocols that have been recommended – like social distancing, staying at home and washing your hands – are nearly impossible for them to follow in the contexts in which they live. As the International Rescue Committee (IRC) noted, “How can you stay home if home isn’t a choice?”

But only about 40 percent of the world’s refugees live in camps; the rest mostly live alongside the world’s urban poor, low-income communities, or other displaced people in urban areas and informal settlements, which often can be even more crowded than official camps. Typically, large, multi-generational families or multiple families share a single residence.

Although refugees and other displaced people cannot effectively practice social distancing, they are still subject to mandated lockdowns and movement restrictions. And most of them are daily wage earners, who make very little working in the informal economy and have little to no safety net. This means that they must choose between having no income and facing starvation or taking jobs that put them at a high risk of exposure to the virus. Additionally, many aid workers are being forced to leave or not being allowed into high-risk areas like settlements, leaving the people there with even less support. That’s why Oxfam America is stepping up its cash programs, which reduces its workers’ contact with high-risk communities (compared with food distribution, for example), and also prevents recipients from resorting to negative means of coping, such as exploiting women and girls, child marriage, and child labor.

Child marriage and child labor are particularly worrying right now while school, usually an excellent preventative measure, is interrupted – not to mention the disruption to learning and development. When it comes to distance learning, Microsoft and UNICEF actually already had a solution in the works prior to the pandemic. In September 2018, they launched a digital remote learning platform, called “Learning Passport,” to provide education to refugee and displaced children. When COVID-19 hit, Microsoft and UNICEF rapidly expanded the program so that any country with a curriculum that can be taught online will be able to continue educating children through connected home devices.

In the absence of social distancing, aid organizations are also focusing on other basic mitigation efforts like hand-washing, which is a challenge when water, sanitation, and hygiene (WASH) resources are limited or nearly non-existent in many of the places where refugees and displaced people live. According to Oxfam America, up to 250 refugees are sharing one water tap in some settlements. In Cox’s Bazar, World Vision has partnered with UNICEF to distribute bath and laundry soap to refugee families, and they’ve set up handwashing stations with soap and water at gathering points all around camp, including at World Food Program food assistance points, women’s safe spaces, learning centers, and multi-purpose centers. Additionally, World Vision is distributing messages about the importance of frequent handwashing and social distancing, and encouraging elderly refugees to stay indoors during this time.

Accurate messaging is important because dangerous misinformation is spreading as quickly as the virus itself through social media and gossip. CARE is addressing this “infodemic” through radio broadcasts and social media posts, as well as sending community volunteers to go door-to-door with accurate information about how to prevent and respond to outbreaks. CARE has also been translating World Health Organization (WHO) guidance into local languages. “The Ebola and Zika battles taught us that community trust made the difference between life and death: trust of information and acceptance of those offering guidance is paramount,” CARE USA’s President and CEO Michelle Nunn, said in a recent video.

Of course, there’s the big question of health services. If even the health systems in the world’s wealthiest countries have been overwhelmed by this virus, imagine the devastation it will wreak in places where health systems are already weak and under-resourced. “The COVID-19 pandemic is a powerful reminder of the world’s inequalities, and how we are only as strong as our weakest health system,” Dr. Stacey Mearns, senior technical advisor for emergency health at the IRC, said in a recent article.

In early April, CARE reported that the only testing facility in Bangladesh was 10 hours away from Cox’s Bazar. However, since then, testing kiosks and intensive care units are being scaled up. Additionally, Spreeha Foundation in Bangladesh has set up telehealth options and at-home screening for vulnerable community members to minimize the number of people traveling to healthcare centers. Many organizations, including Spreeha and CARE, are also helping provide personal protective equipment (PPE), medical supplies and drugs, as well as capacity-building training for medical personnel.

However, the arrival of a new virus doesn’t mean other health conditions go away, particularly in displaced communities, where people already struggle to receive care for acute malnutrition, non-communicable diseases, sexual and reproductive health, physical injuries, infectious diseases, and mental health. Many health organizations like Americares are setting up additional clinics within migrant communities so they can maintain primary health services, while also responding to COVID-19. Mercy Corps has also employed virtual reality technology to ensure that young refugees in Jordan and Iraq receive adequate psychosocial support as this current crisis brings up a lot of fear and uncertainty. And while online and telehealth consultations are helping to reduce in-person medical visits, community health workers in IRC’s nutrition program are also teaching parents how to diagnose their own children with acute malnutrition.

Providing these services is especially important for internally displaced people and irregular migrants. Host governments are ultimately responsible for protecting refugees, but because IDPs have not crossed any borders, they are still under the jurisdiction of their own country. They also do not have the same rights and international protections as refugees and often have an even harder time accessing basic services and humanitarian assistance. There have been reports, too, that irregular migrants are not seeking health services for fear of being detained.

Such fear is not unwarranted, as the safety of asylum seekers, IDPs, and irregular migrants is of critical concern right now. Kids in Need of Defense (KIND), for example, is working tirelessly to advocate for and protect the rights, safety and wellbeing of immigrants and unaccompanied children as they face border shutdowns, confinement in high-risk detention centers, and court hearings. OutRight Action International has also expressed concern that LGBTIQ refugees and asylum seekers who are being forced to stay in camps, settlements, detention centers or hostile countries are facing homophobic or transphobic violence, while border closures are preventing people who face persecution because of their sexual orientation or gender identity from seeking safety.

When countries, like the U.S., suspend immigration because of the pandemic, it only further stigmatizes immigrants and refugees as vectors of the disease. Refugees are often already scapegoats in crises, and misinformation isn’t helping. According to the WHO, stigma can actually make outbreaks worse as it drives people to hide illness to avoid discrimination, prevents people from seeking care immediately and discourages healthy behaviors. And so long as the virus is circulating anywhere, the entire world is at risk. That’s why even though COVID-19 is hitting high-income countries hardest right now, we cannot put it behind us until the most vulnerable among us – refugees, asylum seekers, IDPs and irregular migrants – have all the support they need to rise above this global pandemic, too.