Responding to Automation and Global Employment Trends in the Developing World 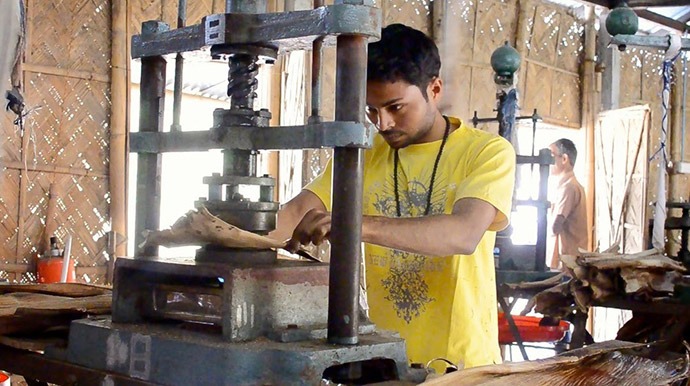 The ability to learn new skills (and unlearn old ways) has become an increasingly indispensable competency for workers hoping to maintain their relevance in the New Economy. For some, including those who may never have been exposed to traditional teaching methods, new methods are being employed to help them leapfrog their learning to enter new industries.

Agarwal described how new forms of training, delivered through 3D animation, videos, and even gamified feedback loops, have been helping young people from rural India gain the skills they need to become high demand workers for employers in their region.

For many people in developing and emerging countries, one of the primary challenges they face is the lack of available high quality, well-paying jobs. And leaders of those countries recognize that a key to greater economic development is matching the talents of their citizens with the needs of employers.

Workers often find themselves stuck in vulnerable employment situations, where the wages they earn are inadequate to meet their family’s basic needs. According to the International Labour Office (ILO) report, “World Employment and Social Outlook: Trends 2018,” around 42 percent of workers (1.4 billion people) globally are classified as having vulnerable employment – either working for themselves or in unpaid family work. In developing countries, this figure jumps to 76 percent of the workforce.

Within developing countries, the ILO report showed that there is also a growing number of people in extreme working poverty – that is, having a per capita household income or consumption of less than US$1.90 per day, adjusted for purchasing power parity (PPP). This year, the number of those in extreme working poverty is expected to reach more than 114 million, or 40 percent.

Moderate working poverty is also widespread. In 2017, around 430 million workers in emerging and developing countries were estimated to be living on incomes of between US$1.90 and US$3.10 per day (PPP).

Globally, the unemployment rate is expected to fall slightly this year to 5.5 percent. However, as more people enter the labor market, the total number of unemployed is expected to stay above 192 million.

The high numbers of young people (ages 15-24) who struggle to find gainful employment in the Middle East and Northern Africa is of growing concern to watchers of the global economy.

At the recent World Government Summit in Dubai in February, Christine Lagarde, managing director of the International Monetary Fund, praised Arab leaders who had begun transitioning “from an oil-fed economy to a more diversified, more inclusive, reformed economy.” Nevertheless, with five million new workers set to enter the Middle East job market each year, global intelligence sources view youth unemployment as a growing security concern, if it is not adequately addressed.

According to the ILO, women are also less likely to participate fully in the labor market. In much of Northern Africa and the Middle East, women are half as likely as their male counterparts to hold jobs. Women are also limited in many places by the types of employment available to them.

Even more concerning than the growing employment shortage, is the potential for new technologies – such as robotics and artificial intelligence (A.I.) – to eliminate jobs entirely. A report by McKinsey & Co “Jobs Lost, Jobs Gained: Workforce Transitions in a Time of Automation,” argues that half of all current jobs are at risk due to automation, though this trend is likely to occur sooner in developed economies, where the higher cost of labor creates higher incentives to automate. But that doesn’t mean developing countries will remain unscathed.

In an interview this month with Knowledge@Wharton, Srikanth Karra, chief human resource officer at Mphasis, an Indian IT services firm, sees developing countries having potential to be hardest hit.

“Although they have the advantage of leapfrogging into the digital economy, the productivity divide between skilled and unskilled [populations] could lead to a bigger gap in income disparities,” Karra said.

How should developing countries respond? Karra says it’s important to look for what he calls the employment “adjacencies.” These are the jobs that are created alongside, or as a result of, new technologies and breakthroughs. Ideally, governments and corporations will try to map these adjacencies in order to realign the workforce to meet these new needs.

In addition to looking for the adjacency employment opportunities, others argue that increasing automation could enable low-skilled workers to take on more complex responsibilities.

Regardless of how all the predictions pan out, it’s clear that global employment trends are shifting. And those engaged in global development are moving quickly to prepare tomorrow’s workforce for the future.

Numerous Global Washington members are helping people in developing countries attain the skills, resources, and opportunities they need to secure gainful, meaningful employment. Read more about them below, and consider how you might want to get involved.

For the past 10 years, nearly 650 people from 45 countries throughout Africa, Latin America, and Asia have experienced iLEAP’s transformative leadership training program. Based in Seattle, iLEAP works to create sustainable social change by growing, sustaining, and renewing social leaders in order to help them to be more effective in their work improving livelihoods and overall economic development.

Mavuno is a nonprofit organization that develops local leaders in eastern Congo to end extreme poverty in their own communities. By investing in leaders with loans, training, and market access, Mavuno organizes communities and builds businesses. Mavuno, which was founded in 2014, now works with over 1500 households near Beni in eastern Congo.

Since its founding in 1999, Mona Foundation has had a simple but compelling goal — to support grassroots educational initiatives that build stronger and more sustainable communities and ultimately alleviate poverty. Mona partners with organizations that work to reduce the barriers to education, improve quality of learning and cultivate agency of the individual. The foundation’s programs use an integrated approach to develop academic skills, and creative and moral capabilities, to transform young people into agents of change in service to their families and communities. Mona Foundation has awarded more than $12 million to 38 initiatives in 18 countries, providing access to quality education and training for more than 258,000 students, teachers and parents annually.

MovingWorlds’ mission is to connect volunteers directly to inspiring startups, non-profits, incubators, schools or other social impact organizations that will benefit from their skills. In doing so, they tackle the “Talent Gap,” one of the leading barriers to global progress. MovingWorlds offers numerous volunteering opportunities in India to ensure communities can reach their full potential.

The NetHope Academy Internship Program was initiated in Haiti after the 2010 earthquake. With funding from the Accenture Foundation, NetHope scaled the program, offering it in Kenya, Rwanda, South Africa, Ghana, India, Egypt, and Liberia. NetHope provides technical training, soft skills training, and on-the-job training via internships at host organizations, which subsequently often offer full-time positions. Hosts include NetHope’s 50-plus global nonprofit members, banks, Internet Service Providers, Mobile Network Operators, other large companies, consulting firms, technology vendors, and various government programs. The goal is for graduates to find employment (including entrepreneurship) within 90 days of program completion and for employers to have access to qualified, competent entry-level IT professionals.

Path From Poverty has been reaching across cultures for 18 years, transforming lives and communities by working with women’s groups; empowering and equipping women to break the cycle of poverty and live into their God-given potential. Alone, women survive; but in a group, they thrive. Path From Poverty women’s groups provide support, accountability, sharing of best practices, and fellowship. The organization’s field staff, all of whom are Path From Poverty graduates, provide training in leadership development, project planning, financial stewardship and group governance.

Providence St. Joseph Health Global Partnerships dedicates the volunteerism of its caregivers to the strengthening of health systems of Guatemala. In conjunction with the Guatemalan Ministry of Health and Medical Teams International, Global Partnerships assesses gaps in facilities services’ and sends clinicians to address those gaps through training Guatemalan clinicians, who in turn become medical skills multipliers by training hundreds more clinicians locally. By focusing on maternal, newborn and child health curricula, this work has the potential to impact over 100,000 people in Chicaman, Guatemala.

Remote Energy empowers technicians to develop the necessary skills to design, install, maintain, and troubleshoot sustainable solar power systems. The organization also trains end users to operate and maintain their systems. Remote Energy’s classes are customized to meet the needs and goals of partners, and designed to be appropriate for students’ education level, electrical background, language and culture.

Street Business School (SBS) is a global training organization, teaching others to bring its proven and effective business training and confidence building to their communities, empowering people to become self-sustaining entrepreneurs and leave poverty behind. The school’s world-class and world-changing model is scaling to reach 1 million people by 2027. This dream will become a reality when partners (other nonprofits) that attend Immersion Workshops deliver SBS to their communities. By training other non-profit organizations to amplify their work and increase the income of those they serve, this expansive partnership model lights up the world. Women in Street Business School are increasing their income from $1.35/day to $4.19/day.

Upaya creates dignified jobs for the poorest of the poor by building scalable businesses with investment and consulting support. Since 2011, the organization has accelerated 20 small and growing businesses in India and invested in 14 of those companies; its 14 portfolio companies have created nearly 8,000 jobs as of December 2017. With offices in Seattle, Washington and New Delhi, India, Upaya has committed to a goal of helping partners create 15,000 jobs by the end of 2019.