GLOBALWA.org / Issue Brief / Leading the Way to a Malaria-Free World

Leading the Way to a Malaria-Free World 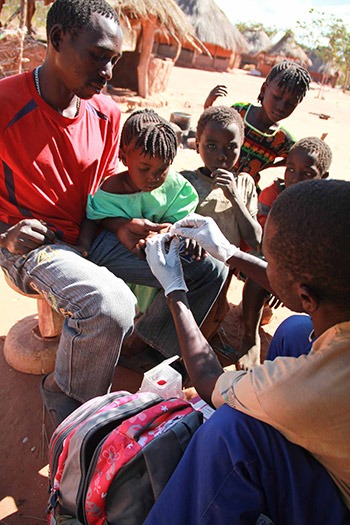 It’s not all doom and gloom on the malaria front anymore. Scientists, health workers, and others have made enormous progress toward eliminating this painful and persistent disease. Between 2010 and 2015 cases of malaria among at-risk populations fell 21 percent globally, and mortality rates for children under five fell by 35 percent. Part of this success is due to effective treatments and preventive measures now widely available, such as insecticide-treated bed nets, indoor insecticide spraying, and effective antimalarial medicines. Furthermore, in November 2016 the World Health Organization announced a pilot project to test a promising new malaria vaccine in three countries in sub-Saharan Africa. Vaccinations are due to begin next year.

Despite the incredible breakthroughs and sheer human will devoted to eliminating malaria, every two minutes a child still dies from the disease. What’s more, seven percent of children who survive the disease suffer permanent neurological disorders.

The number of cases and deaths has decreased steadily since 2000, yet vulnerable groups, such as children and pregnant women, are still very much at risk, including in sub-Saharan Africa, where 91 percent of global malaria deaths occur.

A host of challenges remain, as the disease remains stubbornly linked to macro trends, such as climate change, insecticide and antibiotic resistance, and the mass migration of people due to conflict and war.

Malaria is a parasitic infection that enters the bloodstream through the bite of an infected female Anopheles mosquito. Once the parasite enters the blood stream and multiplies, the infected person experiences flu-like symptoms, and if left untreated, the infection can lead to death. Every year nearly 450,000 people die from malaria, and there are nearly 210 million cases of infection. Today more than 90 countries have active malaria transmission.

While for many adults, malaria is not fatal, the loss of productivity due to illness costs Africa alone an estimated $12 million a year. If malaria were eliminated it would boost African economies and free up public health resources (currently malaria accounts for 40-50 percent of public health spending in endemic areas). Malaria also keeps African kids out of school more than any other disease, causing up to 10 million missed school days each year.

For the record number of displaced people globally (65.3 million), malaria infections have been rising. This vulnerable group is particularly susceptible to infection as a result of close living quarters and a lack of consistent health services. The aid organization Médecins Sans Frontières, also known as Doctors Without Borders, estimates that in some places, such as Yida, South Sudan, it has treated three times as many cases of malaria in 2015 compared with 2014, a fact it attributes to conflict-fueled mass migration.

Climate change also poses a major challenge. Malaria has been identified as one of the most climate sensitive diseases, and according to a World Bank report, climate change may threaten some previously unexposed areas in South America, sub-Saharan Africa and China, causing a 50 percent increase in malaria transmission by 2050.

According to the Intergovernmental Panel on Climate Change (IPCC), anticipated changes in temperature and rainfall also will prolong malaria transmission seasons in some areas, as well as potentially expose new regions to the disease. At the current rate of carbon emissions, global temperatures will increase an estimated 2-3 degrees Celsius, which in turn could increase malaria infections by five percent, resulting in several hundred million more people suffering from the disease.

In light of the remaining challenges to eliminate malaria once and for all, it is crucial that malaria interventions take a broad and multi-faceted view. Two Global Washington members, PATH and Tableau Software, have teamed up to create the Visualize No Malaria campaign, which enables countries to use data to track diseases and tackle outbreaks more effectively. Additionally, the project helps district and facility health teams implement effective prevention and treatment plans at the community level. Visualize No Malaria’s first application is in Zambia, a country whose leaders have adopted a historic national strategy to eliminate malaria. If this project is successful, the model could be scaled globally.

A number of other Washington-based organizations are working diligently to stop a disease that is both preventable and curable.

Adara Development: Adara is focused on improving health and education for women, children and communities living in poverty. Our community based healthcare program provides education on malaria prevention and detection. As part of our maternal, newborn and child health program we also offer testing and treatment.

The Bill and Melinda Gates Foundation: Malaria has long been a top priority for the Bill & Melinda Gates Foundation. In 2013, the foundation adopted its multi-year malaria strategy, Accelerate to Zero, to develop groundbreaking approaches to reduce the burden of malaria and accelerate progress toward eradication of the disease. To date, the foundation has committed nearly US$2 billion in grants to combat malaria. In addition, more than US$1.6 billion has been committed to the Global Fund to Fight AIDS, Tuberculosis and Malaria, which provides about 50 percent of international funding for malaria control worldwide. The Bill & Melinda Gates Foundation also advocates for sustained and increased funding of malaria-related efforts by donor governments and endemic countries.

Malaria No More: Malaria No More envisions a world where no child dies from a mosquito bite. The organization uses its innovative partnerships and focused advocacy to elevate malaria on the global health agenda, create political will and mobilize the global resources required to achieve malaria eradication within a generation.

PATH: PATH is a leader in efforts to control and eliminate malaria nationally, regionally, and ultimately to eradicate it worldwide. With our unparalleled portfolio of malaria projects – across vaccines, drugs, diagnostics and system innovation – we are partnering with countries and organizations around the world to make malaria history.

Pilgrim Africa: Pilgrim Africa is dedicated to creating a malaria-free Uganda. Of every dollar spent on malaria in their budget, about 10 cents goes to education and awareness. They also do district-wide demonstrations of effective malaria control, in partnership with the Ministry of Health, in order to show how malaria transmission can be reduced dramatically, and at scale. And, their Move on Malaria projects save lives, prevent disease, serve as direct and important operational research for national scale-up plans, and will further increase attention, awareness and hope within Uganda that malaria can be defeated.

Tableau Foundation: Tableau is on a mission to help people see and understand their data. This mission is extended by the Tableau Foundation, which helps organizations solve the world’s biggest challenges through the use of facts and analytical reasoning. The Foundation’s grants typically combine Tableau’s two most valuable resources –people and products – with unrestricted funding to organizations that can use data to solve complex problems.

World Vision:  World Vision prevents and treats malaria through its child and maternal health programs and its collaborative network of more than 220,000 community health workers (CHWs) in most high-incidence countries around the globe.  These CHWs and Health programs provide medicines, supplies and interventions to prevent and treat malaria. Through a series of  grants from Global Fund, USAID/Presidents Malaria Initiative and major individual donors, World Vision expects to protect nearly 10 million children and their parents from malaria by September 1st, 2017 by distributions of long-lasting insecticidal nets.  Operating in nearly 100 countries, World Vision is dedicated to working with children, families and their communities to reach their full potential by tackling the causes of poverty and injustice. Learn more.