GLOBALWA.org / Issue Brief / Coffee: The Future of Coffee Farming in a Changing Climate

Coffee: The Future of Coffee Farming in a Changing Climate 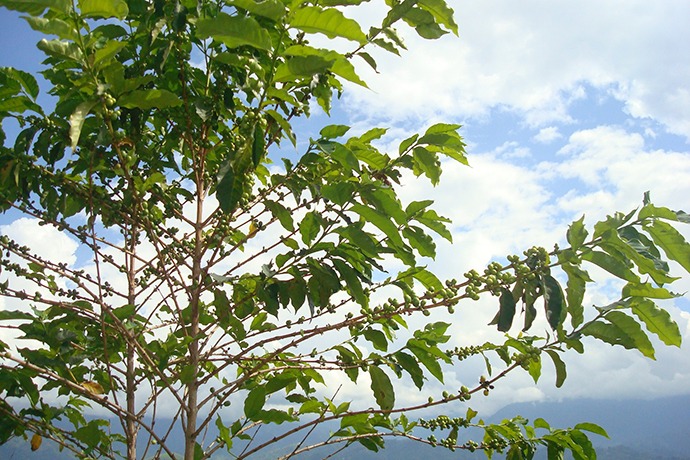 “The Emerald City” is a fitting nickname for Seattle, a city filled with beauty: parks, lakes, and dazzling views of Mt. Rainer. But it’s also a jewel as a global center of environmental stewardship and social innovation. With a robust Climate Action Plan, intended to achieve carbon neutrality by 2050, it’s also a hub for innovation in technology, science, and the arts. And, Seattle is arguably the “coffee capital” of the United States, a seaport city with a deep history of coffee trade and economic growth, which now boasts more than 1,700 coffee shops to serve its more than 684,000 residents who speak more than 160 languages.

For all these reasons, Seattle is the perfect city to, once again, host the Specialty Coffee Association of America’s annual U.S. Re:Co Symposium and its newly renamed “Global Specialty Coffee Expo.” This week, these two events will unite more than 12,000 coffee professionals from around the world.

The term “specialty coffee” is only rightly applied when coffee beans can be accurately traced to their origin, and when the resulting drink is graded a score of 80 or above through cupping, a rigorous method of judging coffee quality. But specialty coffee purveyors are also driven by a quest for environmental and human sustainability at every part of a long global supply chain. 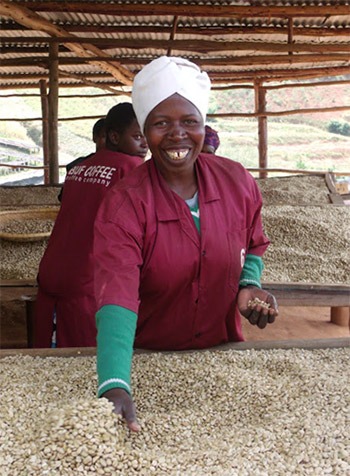 Women are essential actors throughout coffee’s global supply chain, such as this woman, who has worked for a decade at Buf Coffee’s washing stations in Rwanda. Her job includes managing the process of sorting parchment coffee that will be eventually exported to specialty coffee roasters. (Credit: Erika Koss).

The coffee supply chain is nothing if not complex. More than 25 million coffee farmers who hail from the “bean belt”—tropical countries around the equator that produce the coffee bean—work long, tiring hours in some of the world’s most beautiful countries, to grow a product ultimately consumed by more than 80% of all adults in the Global North. Among the 75 coffee-producing countries, the top five producers in 2016 were Brazil, Vietnam, Colombia, Indonesia, and Ethiopia. The vast majority of the world’s coffee is consumed by the European Union countries and in the United States, where demand for coffee has been rising for the last two decades.  But it’s mostly in Scandinavia—where many workers’ unions require coffee breaks—that per capita consumption reigns.

At the Global Specialty Coffee Expo, members will join in promoting and enjoying coffee, as well as discussing various challenges that the industry faces, including the greatest one, climate change. Many have even been asking, will we have coffee in 80 years? In 50 years? In 30?

And, like so much in coffee, the answer is, it depends.

If you ask the researchers of the U.K.’s Royal Botanic Gardens and the Environment and Coffee Forest Forum in Ethiopia, we have until 2080 before a majority of the world’s coffee supply disappears due to climate change.

Perhaps one of the most ominous predictions comes from World Coffee Research, which estimates that half of the land currently suitable for Arabica coffee production will no longer be suitable by 2050. 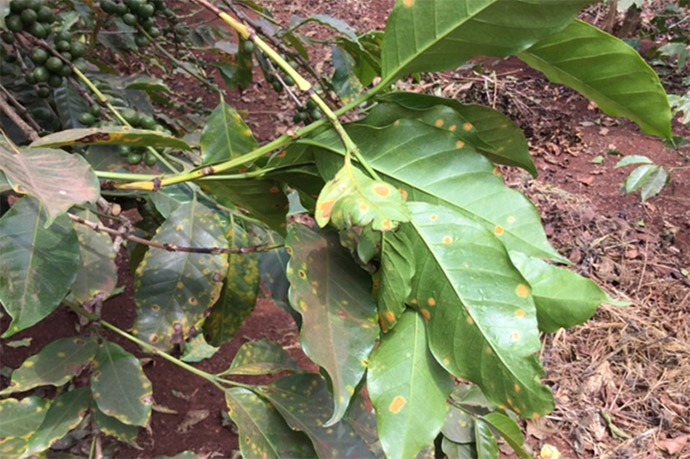 Even the United Nations is concerned. In the Intergovernmental Panel on Climate Change’s 2014 synthesis report, the authors predict that throughout the 21st century, “heat waves will occur more often and last longer, and that extreme precipitation events will become more intense and frequent.” This poses a serious threat for coffee since the tree requires consistent sunlight for photosynthesis, as well as cool temperatures that won’t parch its cherries.

The increasing temperatures also increase the spread of coffee-related diseases and pests that vex coffee farmers and their communities in Latin America, East Africa, and Asia:

Most coffee producers are small-holder farmers, those who own about 25 acres of land or less. Due to coffee’s volatile prices and trade regulations, farmers have a hard time gaining stability unless they join with non-profit certifiers, such as Fair Trade USA, that provide a floor price. Add to this challenge that of labor scarcity. Coffee farmers are aging out, and youth often migrate to cities, where they can earn more for their labor. Since there aren’t enough hands to pick cherries and produce coffee, a coffee lover might well wonder: what hope is left?

Certainly the scientists are hard at work researching more resilient coffee seeds, trees, and beans. And some roasters and café owners implement sustainable business practices by using compostable bags, recyclable coffee lids, or renewable energy. But mitigating climate change will take much more than this.

Thankfully, the entire coffee community is working on these and other challenges —diligently, devotedly, compassionately. That’s why they’re coming to Seattle from all corners of the globe to share with us their passion for the bean – and the people who produce it.

By strengthening the economic, social and environmental sustainability of coffee production, various Global Washington members are building stronger communities and ensuring the future of a product none of us wants to go without.

Agros International’s data shows that coffee production is a key element of the success and profitability for poor families. That is why Agros’ intervention strategy does not solely focus on its production, but in its commercialization. Farmers receive technical assistance and quality inputs, while Agros makes strategic investments in processing as well on site support to guarantee compliance with both market and environmental standards. The final step is for Agros to create a linkage to consumers by formally connecting farmers to exporters. Coffee rust and the recent drought plagued Agros families along with other coffee farmers in Central America. The response from Agros was to plant roya resistant plants and to enhance irrigation systems in their seven active communities, along with further encouragement of crop diversification. Harvesting coffee is just a piece of an overarching strategy to move families along Agros’ Theory of Change, called the “Path to Prosperity.” A wide-range of other crops for consumption and sale also play a role, along with community development, education, health and emotional growth for each community member.

Global Partnerships is an impact-led investor whose mission is to expand opportunity for people living in poverty. The organization invests in social enterprise partners who empower people to earn a living and improve their lives. Over the last 23 years, Global Partnerships has impacted over 5.1 million lives in 15 countries across Latin America, the Caribbean and sub-Saharan Africa as a result of our impact investments in 101 partners. Partners include agricultural businesses and cooperatives that help smallholder coffee farmers increase their income and strengthen their economic well-being. These partners deliver improved market access, technical assistance and working capital loans designed to help farmers improve crop quality, increase yields, obtain better pricing for their crops, and ultimately strengthen their resilience and economic well-being. An example of these partners is Cenfrocafe, a coffee cooperative that serves 2,450 smallholder coffee farmers in Northern Peru. Cenfrocafe has full-time staff dedicated to providing technical assistance and all of their clients are Fair Trade certified. Their clients earn an estimated $6.53 per day, per family member.

Oxfam America focuses on tackling the conditions that cause poverty by advocating for new laws to help the world’s poor and offering direct support to impoverished people. Throughout the years, Oxfam has supported coffee farmers and raised awareness of the importance of Fair Trade. As global coffee prices have fallen, Oxfam has supported coffee farmers in their fight for fair treatment and better wages. Oxfam’s advocacy efforts include meeting with coffee corporations to push them to adopt fair business practices, providing farmers with new technologies and necessary supplies, and raising awareness of the importance of Fair Trade.

Seattle University was the first Fair Trade University in the Pacific Northwest. As part of the University’s journey to garner Fair Trade certification, a professor collaborated with students and colleagues at the Universidad Centroamericana Managua (SU’s sister school) to develop a new fair trade coffee. In partnership with farmers in the Nicaraguan coffee farmer cooperative CECOSEMAC, the sisters schools worked together to develop Café Ambiental, which is now sold by SU. SU has completed various other projects in conjunction with coffee growers in Nicaragua, including developing a more efficient and sustainable way to treat coffee wastewater.

Theo Chocolate is the first Organic, Fair Trade and Fair for Life chocolate factory in North America. Theo believes that chocolate can and must be produced in a way that creates long-term sustainability for the farmers, the planet, and the consumers. To further that mission, all of Theo’s ingredients, not just its cocoa, are certified organic and fair trade. Theo’s Coffee and Cream milk chocolate bar and coffee caramels both contain organic coffee from local roaster Café Vita.

Thriive’s mission is building shared prosperity in vulnerable, global communities. We achieve our mission by making pay-it-forward loans of up to $10,000 to ambitious small business entrepreneurs to grow their businesses and create desperately needed jobs. Unlike a bank or microfinance loan, ThriiveCapital loans are not repaid in cash, but by business donations of an equivalent value of job training, income-enhancing products, or basic necessities to disadvantaged community members. Thriive supports many different types of businesses including coffee manufacturers in Nicaragua, Guatemala, Kenya, and Vietnam. An example is De La Finca in Nicaragua. De La Finca produces, processes, and distributes its own gourmet honey and coffee products. Their ThriiveCapital loan purchased new equipment to grow and expand their coffee shop. De La Finca’s charitable repayment is highly beneficial to the local community- training unemployed single mothers and unemployed college students in coffee production and processing. Trainees then have the opportunity to sell De La Finca products on their own and keep the income. So far, De La Finca has increased their revenue by 101%, created 2 fulltime jobs, and trained 35 individuals!

Woodland Park Zoo supports a variety of environmentally sustainable projects. Since 1996, the Zoo’s Tree Kangaroo Conservation Program (TKCP) has worked with the communities of Yopno-Uruwa-Som (YUS) to protect the endangered tree kangaroo and its rainforest habitat in Papua New Guinea. In 2009, TKCP partnered with the indigenous YUS landowners to help them address economic challenges. Through an existing relationship between the Zoo and Seattle-based coffee roaster Caffe Vita, TKCP and the people of YUS began to sell Conservation Coffee on the international market. The coffee is shade-grown in small, sustainable family gardens, flown out of the remote mountain villages, and sold by farmers directly to Caffe Vita and other international buyers. To date, farmers have exported more than 65 tons of YUS Conservation Coffee. The success of the program encourages other landowners to pledge their land for conservation. More land pledges means more protection for species such as the tree kangaroo.