GlobalWA Members Seek to Dethrone “The King of Diseases”

Malaria: The “King of Diseases” 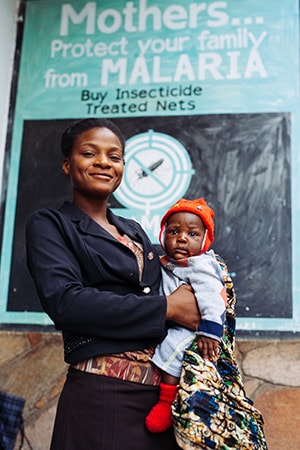 Centuries ago, ancient civilizations weren’t sure exactly what caused malaria (its Latin etymology is “bad air”)—but they did know that it was deadly. The Roman scholar Varro was on to something when he warned his friends, Romans, and fellow countrymen to stay away from swamps because of the “certain animalculae” that bred there. These small animals, he wrote, “cannot be seen by the eyes, which float in the air and enter the body through the mouth and nose and there cause serious diseases.”

In fact, the effects of malaria were so devastating to the Romans, some have theorized that the disease may have even caused the empire to fall. Long before malaria was discovered to be a mosquito-borne illness, other civilizations felt its bite, too—Indian Vedic scriptures dubbed malaria the “king of diseases.”

We’ve come a long way since then. Now, public health developments have made malaria both preventable and treatable. But the disease, which should have been a footnote of history, is still taking a toll: according to the most recent World Malaria Report released by the World Health Organization (WHO), every two minutes a child dies of malaria. And each year, more than 200 million new cases of the disease are reported.

Though we may be closer than ever to eradicating the disease, malaria is not gone yet—which is why World Malaria Day, April 25th, is all about “zero malaria starts with me” —a grassroots campaign to encourage the leaders within the most affected countries to prioritize malaria prevention and care.

The current state of malaria’s impact is one of good news and bad news. Good news— according to World Malaria Report, the “global malaria response is in a much better place than it was at the start of the century.” Worldwide, malaria cases are still dropping: from an estimated 219 million cases in 2017 compared with 239 million in 2010. However, data from 2015–2017 showed no significant progress in reducing global malaria cases. After more than a decade of dramatic progress, political will and financial support for malaria prevention and treatment methods seems to have leveled off.

“Over the last three years, we’ve definitely seen a flatlining of progress in some countries,” explains Kammerle Schneider, the Deputy Director for the Malaria Control and Elimination Partnership in Africa (MACEPA) at PATH.

The WHO report found that eleven countries accounted for the bulk of all global malaria deaths in 2017. These countries—Burkina Faso, Cameroon, Democratic Republic of the Congo, Ghana, India, Mali, Mozambique, Niger, Nigeria, Uganda, and United Republic of Tanzania— carry the highest burden of the disease and require a strong new approach to combat malaria. Developed by WHO and the RBM Partnership to End Malaria, this “high burden to high impact” approach is a coordinated and country-driven response that will lead to clear guidance, policies and strategies addressing the malaria epidemic.

An Ambitious (But Achievable) Goal

The UN’s Sustainable Development Goals are ambitious—to end malaria (and other preventable epidemics like AIDS and tuberculosis) by the year 2030. But a confluence of recent innovations in vaccine research, diagnosis, and accessible information make this goal achievable for malaria—with the right tools.

The first tool is data. Global health non-profit PATH announced today, in honor of World Malaria Day, a $4.3 million technology contribution from Tableau and other companies over the next three years for governments to eliminate malaria—helping an estimated 60 million at-risk people in sub-Saharan Africa.

The new grant is based off the success of the Visualize No Malaria program in Zambia, a 2015 collaboration between PATH, the Tableau Foundation, and the Zambian Ministry of Health. Visualize No Malaria used digital technologies to create “real-time, actionable data” for health workers to make better decisions about techniques like indoor residual spraying and bed net distribution, for example, to effectively treat malaria cases (and prevent new ones). Making this data available had an astounding effect—the Zambian government reduced reported malaria cases by 85 percent and malaria-related deaths by 92 percent.

The second tool is science and innovation. While antimalarials can reduce the risk of infection by 90 percent, there is currently no FDA-approved vaccine available for malaria. But that day may come soon. Last year, scientists including researchers from the Vaccine and Infectious Disease Division of Seattle’s Fred Hutchinson Cancer Research Center discovered an antibody called CIS43, which could lead to the development of a universal malaria vaccine.

In addition, the Seattle Malaria Clinical Trials Center (MCTC), a collaboration between Fred Hutch, the University of Washington, Seattle Children’s Research Institute and other partners, is one of only a few centers in the world capable of safely testing malaria vaccines in human clinical trials. Recent investigations by the MCTC into weakened parasite vaccines, and the results of clinical trials, will be published in the coming months.

Global Good, a collaboration involving Intellectual Ventures and Microsoft co-founder Bill Gates, is also on the cutting-edge of malaria diagnosis and prevention. They’re using an AI-enabled microscope, called the Autoscope, to recognize signs of infection from microscopic blood stains. The Autoscope can help achieve a level of rapid and large-scale diagnosis of the disease where humans can’t, especially in understaffed areas.

The third tool is awareness. Global non-profit Malaria No More announced they’ve recently partnered with the Times Bridge of India to generate awareness of malaria prevention by “building coalitions of influencers, strengthening policy advocacy, and producing and distributing regionally adapted, multi-media content to elevate the issue on the national agenda.”

Even though India has the fourth highest malaria burden of the eleven “high burden” countries, the country registered a 24 percent decrease in malaria cases between 2016 and 2017. The new partnership will use storytelling to leverage Malaria No More’s success in the Odisha State, which reported a decline of over 80 percent malaria cases and deaths between 2017 and 2018.

The possibility of ending needless suffering and deaths from malaria is closer than ever. But momentum needs to be catalyzed to get back on track to meet the UN’s Sustainable Development Goals.

“I think that it’s a really fragile time,” says Kammerle Schneider from PATH. “We’ve seen flatlining, which we haven’t seen in a really long time.”

There’s no ‘silver bullet’ to solving malaria right now, Schnieder says, but there is clear evidence that using quality data to direct the right intervention mix, combined with effective messaging, can work wonders.

“We have good, interesting new tools coming down the pipeline. Elimination of a disease is a long, hard slog, and it takes affected communities, and national leadership, really owning and driving the agenda.”

The following Global Washington members are working on malaria prevention, treatment, and eradication:

Adara is focused on improving health and education for women, children and communities living in poverty. Adara’s community-based healthcare program provides education on malaria prevention and detection. As part of the organization’s maternal, newborn and child health program, it also offers testing and treatment.

In 2018, the foundation updated its multi-year malaria strategy, a further evolution of the 2013 Accelerate to Zero strategy, to reduce the burden of malaria deaths while identifying the pathway to eradication of the disease. To date, the foundation has committed more than US$2 billion in grants to combat malaria. In addition, more than US$2 billion has been committed to The Global Fund to Fight AIDS, Tuberculosis and Malaria. The Bill & Melinda Gates Foundation advocates for sustained and increased funding of malaria-related efforts by donor governments and affected countries, increased use of improved data for decision-making and innovation in tools to fight malaria.

The Seattle Malaria Clinical Trials Center, based at Fred Hutchinson Cancer Research Center, is one of only a few centers in the world capable of testing malaria vaccines or drug candidates in human clinical trials by the well-established malaria human challenge model. The Seattle MCTC is a collaboration between Fred Hutch, the University of Washington, Seattle Children’s Research Institute and other partners.

Malaria No More envisions a world where no one dies from a mosquito bite. More than a decade into our mission, our work has contributed to historic progress toward this goal. Now, we’re mobilizing the political commitment, funding, and innovation required to achieve what would be one of the greatest humanitarian accomplishments – ending malaria within our generation.

PATH is a leader in efforts to control and eliminate malaria nationally, regionally, and ultimately to eradicate it worldwide. With its unparalleled portfolio of malaria projects – across vaccines, drugs, diagnostics and system innovation – PATH is partnering with countries and organizations around the world to make malaria history.

The Tableau Foundation is an initiative led by the employees of Tableau Software (NYSE: DATA) that encourages the use of facts and analytical reasoning to solve the world’s problems. Tableau Foundation grants combine Tableau’s two most valuable resources – its people and its products – with financial support to nonprofits that are using data to reshape communities around the globe. Since 2015, Tableau Foundation and PATH have partnered to provide vital software, training, and funding in support of Zambia’s goal of eliminating malaria by 2021. The partnership empowers frontline health workers with the critical tools to track and treat malaria cases to help eliminate this deadly disease.

World Vision (WV), in partnership with The Global Fund and national Ministries of Health, works to protect all populations—with an emphasis on pregnant women, children, and rural populations—with long-lasting insecticidal net (LLIN) distribution, indoor residual spraying, intermittent preventive treatment in pregnancy and case management. WV supports universal coverage of LLINs to the most vulnerable and hardest-to-reach populations through a network of over 220,000 community health workers who are trained to distribute nets, demonstrate hang-up, and ensure consistent use and maintenance of nets. Through the distributions of LLINs alone, nearly 10 million children and their families were protected from malaria in 2017.