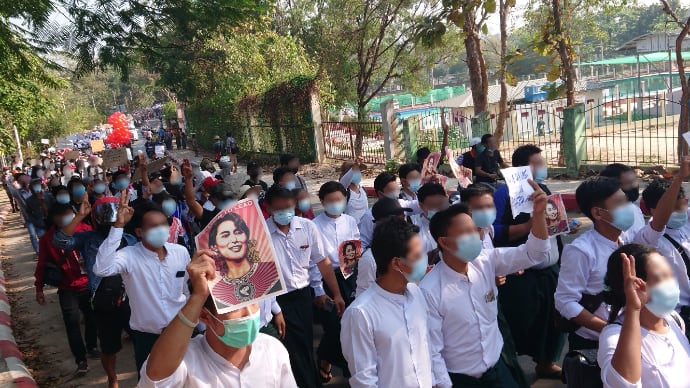 The fragile democracy of Myanmar, which held for a decade, was upended at the beginning of February 2021 when the military staged a coup to prevent newly elected members of parliament from being confirmed. The military’s favored party lost the November elections in a landslide to the National League for Democracy, the governing party of Daw Aung San Suu Kyi.

In response to the coup, millions of Myanmar’s citizens and residents took to the streets to protest, many banging on pots and pans to “drive the ‘military regime’ out of the country.” The demonstrations soon evolved into a nationwide strike of civil service workers, with nurses and doctors the first to refuse to work. They were followed quickly by teachers, as well as bank tellers and other private sector employees. All this after a grueling year of lockdowns in response to the COVID-19 pandemic, today the country has nearly ground to a halt. Between February and May 2021, an estimated 781 people have been killed, including 52 children and 4,916 people have been arrested.

Pangea Giving, a giving circle that provides grants to community-based organizations in East Africa, Latin America and Southeast Asia, has been donating to Myanmar since 2009. Recently Pangea hosted a conversation with Therese Caouette of Partners Asia about the evolving social and political crisis and people’s movement in Myanmar.

Caouette noted that when the coup began in February, about 16 percent of the population was living below the poverty line. Even those who had savings to fall back on are struggling because bank ATMs have been closed. With the banking sector effectively blocked, aid groups too are having difficulty responding to people in need and many have suspended their operations.

Caouette noted that the police brutality has been particularly disturbing to see. And in fact, she said many of the young people in the country had never experienced the police or military behaving this aggressively before, whereas in ethnic minority areas this has been seen for decades. The experience has provoked a greater understanding, she said, such that many people have been posting signs apologizing to the Rohingya and other ethnic minorities, saying they didn’t realize how bad things were for them.

Myanmar’s ambassador to the United Nations gave a powerful speech against the military coup and asked that the world recognize the elected government and not the military. He was fired by the military, but the UN ultimately recognized him as the legitimate ambassador for his country. Additionally, a growing network called the Milk Tea Alliance, made up of young pro-democracy activists from Hong Kong, Taiwan, Thailand, Cambodia, and Myanmar, has provoked growing discomfort among authoritarian governments across the ASEAN region.

The following GlobalWA members have been working in Myanmar or bordering countries, and are responding to the humanitarian implications of the ongoing political and humanitarian crisis.

Human Rights Watch has published a number of reports and videos on the current crisis in Myanmar. The organization is committed to investigating and reporting on abuses happening in all corners of the world. About the military coup on February 1, 2021, HRW wrote, “Security forces used excessive and lethal force against mass protests around the country. Myanmar had long defied international calls to investigate military atrocities and hold those responsible to account, including for crimes against humanity and acts of genocide committed against the Rohingya, and war crimes and crimes against humanity against other ethnic minorities. Free speech and assembly, increasingly restricted over the past five years, face grave new threats under the military junta.”

The International Rescue Committee provides health care, water and sanitation services, and community support to help people rebuild their lives. The organization also works in Bangladesh, where hundreds of thousands of Rohingya refugees from Myanmar have fled. In response to the current crisis, the IRC calls on all parties to refrain from violence and ensure those most at risk are protected. The IRC is extremely concerned about the shrinking space for local groups to organize and advocate peacefully on behalf of their communities. The IRC has temporarily suspended most of its activities while it assesses the situation, but it hopes to resume delivering lifesaving aid as soon as it is safe to do so.

Landesa said it “strongly condemns the use of deadly force against those participating in the Civil Disobedience Movement in Myanmar, and calls on the police and armed services to respect the human rights of the people of Myanmar and to cease the use of force immediately.” Further, the organization says it continues to monitor the ongoing situation in Myanmar, and that its top priority is the safety and well-being of dozens of staff and contractors and the communities where Landesa works. Landesa also has said that it “strongly supports fundamental democratic principles and the protection of human rights and fundamental freedoms, including of free expression and peaceful assembly, and encourages all parties to resolve the present events peacefully.”

Medical Teams International
At the end of 2017, Medical Teams International deployed volunteer doctors and nurses to Bangladesh in response to influx of hundreds of thousands of Rohingya refugees – a minority group in Myanmar – who experienced horrific violence, including massacres, and were forced to flee. Medical Teams volunteer doctors and nurses partnered with locals on the ground to set up emergency health facilities in order to treat refugee health needs. In 2018, Medical Teams and Food for the Hungry formed the Joint Rohingya Response Programme. Together, the organizations currently provide life-saving primary healthcare services to Rohingya refugees in Kutupalong and Nyapara refugee camps in Cox’s Bazar, Bangladesh. In May of 2020, Medical Teams opened the first COVID-19 isolation and treatment center in Kutupalong camp. To date, Medical Teams has vaccinated 49 staff against COVID-19 in Bangladesh.

In Myanmar, Oxfam works to reduce poverty and inequality through promoting the power of women and men to harness the benefits of political reform and economic development.  After the military coup in early February, Oxfam’s programs were briefly halted, but the organization reports they are up and running again. Executive Director Gabriela Bucher issued a statement saying, “Oxfam is deeply concerned about the impacts of the military coup on the people of Myanmar. We see basic rights already coming under intense pressure and are concerned to see that space for civil society groups to safely organize and operate is quickly diminishing. The potential humanitarian consequences for already vulnerable groups, particularly those in conflict affected areas across the country, are incredibly worrying.”

Pangea Giving, a volunteer-run giving circle, is working to learn more about the situation in Myanmar and how its partners are managing. In setting the context for its webinar discussion with Therese Caouette of Partners Asia, Pangea Giving noted, “This past month we have witnessed threats to democracy and the peaceful transition of power here in the United States, as well as in countries where our partners live and work.” Significant challenges in Myanmar include the closure of banks, which prevents payment of salaries and the ability to wire funds, an interruption of internet services that prevents communication, and the cancelation of laws that protect human rights and safety.

Partners Asia forges relationships with local leaders who work to serve the needs of “invisible” populations — refugees, migrants, ethnic minorities, LGBTQI — living primarily along the Thailand-Myanmar border. One of the organization’s long-term grantees in Bangladesh, Children on the Edge, has worked in the refugee camps and slum areas in Cox’s Bazar for the last eight years. Another grantee, Progressive Voice, is actively advocating for the Rohingya and many other ethnic minorities – ensuring information and voices from the ground are brought into the international discourse. Khin Ohmar, who serves on Partners Asia’s Advisory Council, is connecting marginalized communities to United Nations Human Rights mechanisms, including the UN Human Rights Office of the High Commissioner and UN Special Rapporteur for Myanmar.

On March 3, 2021, Save the Children issued a statement decrying the use of live ammunition against unarmed protestors, many of whom are young adults, saying, “We are appalled and angered by these fatal shootings of demonstrators by security forces across Myanmar—these are atrocious and represent an unjustifiable escalation in the use of lethal violence. Save the Children particularly condemns the deaths and injuries of children and young people, and calls on the security forces to end these deadly attacks immediately.” Save the Children has been working in Myanmar since 1995.

Vital Voices Global Partnership issued a statement saying that it is “deeply concerned by reports that Myanmar’s military is working to undermine the country’s recent elections, and has detained multiple civilian leaders including State Counsellor Aung San Suu Kyi.” Further, the organization said it is “alarmed by the apparent arrests of civil society leaders who have tirelessly fought for democracy for decades.” Over the last several years, Vital Voices has worked with women leaders in Myanmar (Burma) at the forefront of advancing democratic institutions, advancing the rights of and advancing economic opportunities for women and girls. “We condemn the acts of Myanmar’s military and offer our solidarity to those who continue to courageously demand a democratic country in the face of threats and violence,” Vital Voices said. “We are standing with those who have been fighting to build a democratic country over the past decade – and who despite all odds continue to work toward equality.”