ACTION ALERT – Conflict Is Escalating in Myanmar and Civilians Are Suffering 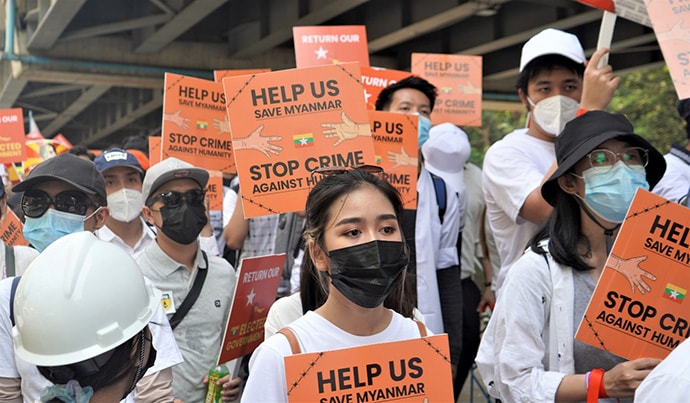 On February 1, 2021, the fragile democracy of Myanmar, which held for a decade, was upended when the military staged a coup to prevent newly elected members of parliament from being confirmed. Millions of civilians took to the streets in peaceful public opposition to the coup which was met by violence, crackdowns, and arrests by the military which continue to this day. The Guardian reports: “The Myanmar military kidnapped civilians and forced them to work as human shields, attacked homes, churches and carried out massacres, according to a report that warns recent atrocities in eastern Myanmar may amount to war crimes.” Voice of America reports Myanmar’s military has destroyed at least 4,571 homes since May in townships where anti-junta resistance has been the fiercest.

The conflict keeps escalating and civilians are suffering.

According to the Assistance Association for Political Prisoners (AAPP), since February of 2021:

And, according to OCHA ReliefWeb:

For more information, also please read this guest post provided by May Sabe Phyu, a Kachin social worker and activist from Burma: One Year Since the Coup, Women-led Protests in Myanmar Need Global Solidary and Action More Than Ever.

GlobalWA member organizations continue to work in Myanmar and neighboring countries, responding to the humanitarian implications of the ongoing political and humanitarian crisis. Please take a moment to read their following statements and see how you can help. And please share with friends and colleagues.

Human Rights Watch: Please read this article on the situation: Myanmar: Year of Brutality in Coup’s Wake, and take a moment to watch this video:

International Rescue Committee (IRC): The IRC began work in Myanmar in 2008, providing humanitarian relief in response to Cyclone Nargis. Since then, we have expanded our work to support communities affected by conflict and disaster and provide services directly and in partnership with local organizations and service providers.

The IRC currently works in six states across the country to provide health care, protection, women’s protection and empowerment, and water and sanitation, as well as shelter materials and other emergency relief to newly displaced populations. Learn more about the IRC’s Myanmar response. Also read: One year after Myanmar military’s seizure of power, aid agencies call for increased effort to end human suffering.

The IRC also assists refugees from Myanmar who have sought safety in countries including Bangladesh and Thailand.

Landesa: Landesa strongly condemns the reversal of the democratic process in Myanmar, including the use of deadly force against those participating in the Civil Disobedience Movement, and the arbitrary arrests and imprisonment of ordinary citizens and their elected leaders.  We call on the police and armed services to respect the human rights of the people of Myanmar and to cease these infringements immediately.

Landesa continues to monitor the ongoing situation in Myanmar, one year following the military’s declaration of a state of emergency and its seizing control of the government.  Landesa’s top priority continues to be the safety and well-being of our staff and the communities where we work.  We remain committed to supporting the development of rural Myanmar.

Landesa strongly supports fundamental democratic principles and the protection of human rights and fundamental freedoms, including of free expression and peaceful assembly, and encourages all parties to resolve the present events peacefully. We agree with the statement by the ASEAN Chair that the principles of democracy enshrined in the ASEAN Charter should be respected.  We agree with the Chair’s call for “the return to normalcy in accordance with the will and interests of the people of Myanmar.”

Oxfam America: Together with local partners, Oxfam works on provision of humanitarian services – focused on WASH, emergency food security and cash, long-term development, and nexus projects. Most of Oxfam’s projects in Myanmar have been significantly impacted by COVID-19 and the immediate security and political risks from the military’s seizure of power in February 2021. More than 400,000 people have fled their homes due to conflicts since 1 February 2021, joining an estimated 340,000 people who were already displaced. The 2022 UN Humanitarian Needs Overview identifies 14.4 million people experiencing humanitarian need in Myanmar compared to 3 million in 2021. The Humanitarian Country Team prioritizes 6.2 million people for urgent support, of which more than 50% are women and girls. This is a huge increase from the 1 million people targeted last year and is evidence of the crisis in Myanmar and the effect on its most vulnerable citizens. The 2022 UN Humanitarian Response Plan requests a sum of $826 million USD to address the fast-growing humanitarian needs of 6.2 million vulnerable people amidst escalating conflict and the COVID19 crisis. Displaced people urgently need shelter, food, water, medical care, and other essential aid, including services for survivors of conflict-based sexual violence and other forms of violence against women. Myanmar’s military and all parties to conflict must ensure protection of civilians and allow local and international humanitarian actors immediate, unrestricted, and sustained access to areas where people are in need.  Visit our Emergencies page to learn more about and support Oxfam’s global emergency response efforts.

Pangea Giving: Pangea Giving, a volunteer-run giving circle, continues to monitor the ongoing situation in Myanmar, and how our grant partners are conducting their work under the rule of the military Junta. After following discussions with our Myanmar partners and US-based NGOs (Partners Asia, Shanta Foundation, and EarthRights International), we know that the situation worsens day by day. Villages have become isolated, food prices have steeply increased to dangerous levels, attacks from the government against civilians continue to escalate, and people are dying at home from COVID-19 due to the Junta’s blocking of hospital access and medical care.  The junta-imposed restrictions on travel and group meetings present continuing challenges for staff and villagers. Since the military coup, Pangea has continued to support the people of Myanmar with our grants and with personal donations from Pangea members. We are resolutely in favor of efforts for a peaceful resolution that brings an end to military rule and brings justice for all the people of Myanmar.

Partners Asia: Partners Asia forges relationships with local leaders who work to serve the needs of “invisible” populations — refugees, migrants, ethnic minorities, LGBTQI — living primarily along the Thailand-Myanmar border. One of the organization’s long-term grantees in Bangladesh, Children on the Edge, has worked in the refugee camps and slum areas in Cox’s Bazar for the last eight years. Another grantee, Progressive Voice, is actively advocating for the Rohingya and many other ethnic minorities – ensuring information and voices from the ground are brought into the international discourse. Khin Ohmar, who serves on Partners Asia’s Advisory Council, is connecting marginalized communities to United Nations Human Rights mechanisms, including the UN Human Rights Office of the High Commissioner and UN Special Rapporteur for Myanmar.

Save the Children has worked in Myanmar since 1995, providing life-saving health care, food, education, and child protection programs through more than 50 partners and 900 staff across the country. In response to the humanitarian crisis in Myanmar, Save the Children has reached a total of 302,812 people (127,936 children) to-date with our programming. This has included providing emergency food and cash distributions to 65,730 people and over 5,000 people in internally displaced person (IDP) camps in Chin and Kayah State, Myanmar.

The subsequent humanitarian crisis has caused the collapse of the healthcare and education systems and has undermined the already fragile child protection system. Our response team has built a rapid response strategy that addresses children and families’ most immediate needs and subsequently it outlines our funding priorities. One of our highest priorities is our health and nutrition programming where we have set up mobile health clinics and supplementary feeding programs for the prevention and treatment of acute malnutrition. In addition, we are prioritizing our cash and food assistance programming, which includes cash transfers to pregnant and lactating women as well as providing food assistance to food insecure households. Learn more about our work in Myanmar.