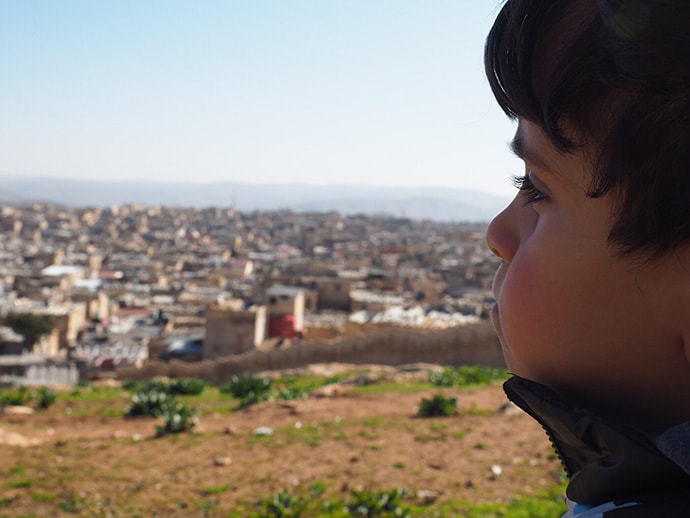 Imagine witnessing the destruction of your livelihood, your community, maybe even your very home, changes that force you and your family to have to leave and start over somewhere else. But when you try to look for help, it’s not there—because according to an official designation, your problems don’t merit international assistance.

June 20, World Refugee Day, is a day meant to call attention to the “unprecedented” crisis in rising global displacement levels. According to the most recent report from The Office of the United Nations High Commissioner for Refugees, (UNHCR), 68.5 million people have been forcibly displaced worldwide, and 40 million people are forced to flee their homes, but remain within their country’s borders. Among them, 25.4 million people are classified as refugees (up by 4 million since 2015) under the UNHCR mandate. But there’s one group that UNHCR has yet to acknowledge—climate refugees.

“Climate refugees” are people who leave their countries because of reasons that can be tied to climate change, either directly or indirectly, through extreme weather, drought, flooding, crop failures, or even violence or poverty caused by the loss of natural resources. Since 2008, an average of 24 million people have been displaced by catastrophic weather disasters each year.

It’s worth understanding the differences between how refugees, migrants, and internally displaced persons are officially defined—because it determines what protections they receive (or even if they can receive them). According to the protocol established by the UNHCR in the 1951 Refugee Convention, refugees are “persons fleeing armed conflict or persecution” in their homelands and fearing for their lives.

Like refugees, Internally Displaced Persons (IDPs) have also been forced to flee – however, they have not crossed an internationally recognized state border. While refugees’ status entitles them to certain rights and international protection, IDPs are still under the jurisdiction of their own governments.

Finally, Migrants are defined as those individuals who “choose to move not because of a direct threat of persecution or death, but mainly to improve their lives by finding work, or in some cases for education, family reunion, or other reasons”—they can always return to their home country safely if they need to.

Currently, if global forced migration trends continue, there will be an increase of between 180 and 320 million displaced people by the year 2030, according to a recent report from the Center for Strategic & International Studies. But some forecasts on climate refugees predict up to one billion “environmental migrants” (again, definitions matter) by the year 2050. (The most widely cited estimate, however, is 200 million—still nothing to sneeze at—from a 2015 UN study).

The most recent Global Report on Internal Displacement says that in 2017, disasters accounted for 61 percent of internal displacement, while conflict only accounted for 39 percent. Clearly, climate change is causing a migration crisis, whether internationally or within a country’s own borders. But because climate refugees don’t have an official designation, it’s as if they don’t officially exist—which prevents them from gaining access to valuable funds and services that could potentially save their lives. So why might the UN be disinclined to change the definition of “refugee” to include those fleeing the effects of a changing climate?

Within the international humanitarian community, there’s a rigorous debate raging right now about this very question. An already “stretched to the limit” UNHCR fears that allowing refugee status for climate migrants would water down existing protections for those fleeing war or persecution. In March last year, UN officials told the European Union that the latest migration compact would not grant “specific legal international protection to climate-induced migrants.”

A good response to why the UN Refugee Convention should include “climate refugees” as an official designation comes from Jane McAdam, Scientia Professor of Law and Director of the Kaldor Centre for International Refugee Law at the University of New South Wales. Climate change, she argues, is complex—with gradual effects like rising sea levels that get worse over time. And in many cases, the effects of climate change are often like “the straw that breaks the camel’s back,” connected to other problems like “conflict, human rights abuses, poverty and poor governance.”

On a recent episode of Displaced, a podcast from the International Rescue Committee, a Global Washington member organization, McAdams argues that we need to “think more creatively” about our global and local responses to climate-change related disasters, which includes mitigating the risk of future environmental displacement in the first place by helping people achieve greater resilience in their own communities.

Closer to home, climate change is causing a surge of migrants from the Northern Triangle countries to head for the border. In the Western highlands of Guatemala, falling coffee prices due to “coffee rust”—a climate-change induced fungus—means many farmers are abandoning their land. In response to the crisis, Mexico has pledged to send 6,000 troops to Mexico’s southern border with Guatemala. As more climate migrants arrive at the US’s doorstep, the debate about immigration grows—but one presidential hopeful may have a solution.

Washington State Governor Jay Inslee is the first U.S. presidential candidate to not only acknowledge the climate refugee crisis, but also make it a key part of his platform. Recognizing both the economic and social impacts of climate change, his Global Climate Mobilization Plan ties together immigration and the global economy to find innovative solutions. For example, the plan focuses on building strong resettlement programs, but also providing robust aid to “Northern Triangle” countries particularly vulnerable to climate change—like Honduras, Guatemala, and El Salvador—to combat poverty and find new agricultural resources.

Apart from presidential ambitions, efforts from the non-profit development sector in Global Washington’s network are leading the way in offering immediate and lasting support to climate migrants and refugees, both overseas and within the state.

For example, in Mongolia, nomadic herders dreaded the onslaught of the dzud, a fierce winter weather pattern that kills their livestock—and has become more severe due to climate change. Mercy Corps developed a simple but effective text messaging platform that helped over 20,0000 families communicate about local weather changes to “find greener pastures”—in effect, leading to a reduction in livestock deaths.

The need for healthy harvests, water availability, and access to resources are all complex “push factors” that force vulnerable populations to flee their homes. Seattle International Foundation (SIF) recognizes these factors need to be dealt with collaboratively, and are often intertwined with other political, social, and economic factors. That’s why they run the Centroamérica Adelante program,  a ten month program that teaches leadership skills to civil society leaders across sectors and industries in Guatemala, El Salvador, and Honduras (three of the top 20 countries most at risk for climate change).

Though their focus is on ending poverty, Oxfam joined the 2018 Global Climate Action Summit in San Francisco because, in their words, “any solution to climate change that leaves behind vulnerable people isn’t a real solution.” Climate Journeys: Tales of Displacement across a Changing Planet was an affiliated event at the summit that sought to put a face to the crisis by telling the stories of refugees impacted by climate change and moderating a discussion about finding real (and equitable) solutions.

When it comes to resilience, solutions need not be complex—in fact some of the “lightest lift” ideas can have the most impact. World Vision’s conservation project, Farmer Managed Natural Regeneration (FMNR), invented by Tony Rinaudo, the Natural Resources Advisor for World Vision Australia, is a low-cost deforestation solution in which farmers regrow trees by retaining stumps among their crops and pastures and coaxing them to grow into trees. Rinaudo’s downloadable FMNR manual has been used by thousands of farmers in Senegal, Mali, Kenya, and Ghana.

Finding a Home Through Resettlement

Building resilience to climate-induced changes—minimizing risk, learning new ways to adapt to changing norms in weather and geography—all of this is key to coping with the changes ahead. Still, some things like rising sea levels are inevitable, so displacement is bound to happen as well—making the need for resettlement a reality. Here, Washington state also leads the way, as the third-largest state for refugee resettlement in the country—thanks to a strong network of local non-profits working on these issues.

For the refugees and displaced persons who arrive here, local organizations like World Relief Seattle, IRC in Seattle, and the Northwest Immigrant Rights Project (NWIRP) can be a powerful welcoming crew—meeting them at the airport, securing housing and employment, connecting them with other family members and health services, and providing legal assistance. In 2018, World Relief Seattle resettled over 757 refugees and asylees from over two dozen countries. And in 2016, NWIRP advocated for over 500 people facing deportation and separation from their families.

Latin America is in the top three most vulnerable regions for climate change displacement in the world, and two other Global Washington organizations have focused their efforts on this region. Up to 60% of displaced people and refugees are children, and Kids in Need of Defense (KIND) works to protect unaccompanied children from “Northern Triangle” countries being denied access to the US, as well as supporting legislation to minimize border crossings by expanding refugee processing. Many of these children in Central America and Mexico are more vulnerable to violence and exploitation while crossing, so UNICEF USA is finding ways to make their journeys safer.

While climate-forced refugees struggle to gain recognition in the international community, the stakes continue to grow. The World Bank’s most recent report on climate migration predicts that over 140 million people in three regions—Sub-Saharan Africa, South Asia, and Latin America—could be forced to escape major climate-induced changes by 2050. The impacts will affect the poorest and most climate vulnerable areas the most.

But the report states that if we act now, by cutting greenhouse gas emissions and enacting “climate-smart” development planning, we can reduce the number of climate change refugees by 80%—a significant (and manageable) amount. Not every answer means having to leaving home, and despite the lack of an official designation, communities and development organizations are defining success—for themselves, and for the communities they serve.