GLOBALWA.org / Our Blog / “Years don’t wait for them”: 5 Things to Do Now to Protect Children’s Rights During Covid-19

“Years don’t wait for them”: 5 Things to Do Now to Protect Children’s Rights During Covid-19 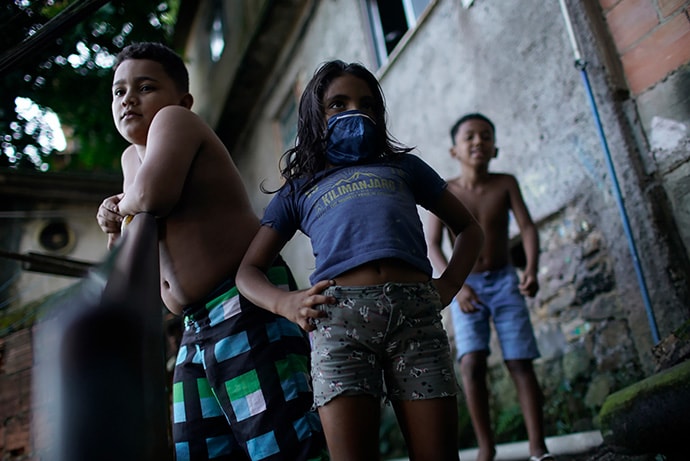 Children in a favela in Rio de Janeiro watch as a volunteer disinfects public areas during the Covid-19 pandemic, Brazil, April 20, 2020. © 2020 by Mauro Pimental/AFP via Getty Images

“It does not make me happy that my children are no longer going to school,” the mother of two preschool-age children in North Kivu, a conflict-affected region in the Democratic Republic of Congo, told us. “Years don’t wait for them. They have already lost a lot. . . . What will become of our uneducated children?”

Children around the world face an unprecedented threat to their human rights. Pandemic-related school closures have affected 1.5 billion students, placing children at immediate risk of labor exploitation, hunger, recruitment into armed groups, and, especially for girls, child marriage, and sexual violence. Two decades of gains in reducing child labor and increasing school enrollment are under threat.

At Human Rights Watch we have been interviewing students, parents, and teachers in 55 countries about their experiences during the pandemic. A woman from Lagos, Nigeria, said that since schools closed, her three siblings, ages 11 to 14, work hawking fish: “None of them have been able to continue any type of educational activity.”

A teacher of recent immigrants in Texas said that many of her students could not participate in online learning because they were looking after younger siblings “or because other family members had hours decreased at work, the kids had to step in and work.”

“The fear for me regarding my children is that they will get lost and join the armed groups in the region,” said a parent of two secondary students, also in North Kivu.

School buildings closed for the pandemic may be misused, ultimately denying more children education. In June, paramilitaries from Sudan’s Rapid Support Forces took over a girls’ primary school to use as a training base. The armed forces did not allow it to reopen for students to take secondary-school entrance exams.

Girls, children with disabilities, children living in poverty, and others are often at greater risk. A teacher at a school for girls, including some with disabilities, in the Central African Republic said he had not been in touch with any of his students since schools closed in March. “Most children will lose knowledge acquired beforehand,” he said.

A teacher in informal settlements in Nairobi, Kenya, told us, “None of the students have access to internet-enabled smartphones.  Digital learning is not an option.” When devices or data are in short supply, boys often have more access than their sisters.

Quality education is intrinsically important and also protects other rights and prevents other abuses of children. Fulfilling the human right to education depends in part on government  resources. At the very least, governments are obliged to not regress or discriminate. Yet in many places during this pandemic, these obligations aren’t being met.  “Education has become, at the governmental level, a secondary priority,” a teacher in Barcelona told us.

Instead of backsliding, or even just holding the line, there is opportunity to do better. As countries work toward safe reopening of schools for in-person instruction, here are five things that don’t have to wait:

First, schools offering remote learning should reach out to students missing from online classes, try to help them re-engage, and provide remedial education.

Second, governments should lift illegal and arbitrary policies that were already keeping children out of school. Tanzania and other countries should revoke discriminatory school bans on pregnant girls and young mothers. Lebanon should change its discriminatory nationality laws that exclude children from school. Governments should also lift restrictions on refugee children, such as Bangladesh’s bar on formal education for ethnic Rohingya from Myanmar and other countries’ limits on secondary education for Syrian refugees. Education systems should prohibit corporal punishment. Before, the pandemic, 260 million children were out of school.  The reopening of schools is the moment to be overinclusive and reach children who have been persistently excluded.

Third, governments should protect school buildings. Endorsing the international Safe Schools Declaration and restricting military use of schools will protect schools closed during armed conflict and the pandemic. In Mali, which has signed the declaration, for example, the education minister reminded the defense minister in May of the obligation not to use schools.

Donors funding girls’ education, refugees, or school construction can use their leverage to protect their investments and the children they are meant to serve.

Fourth, recognizing that digital literacy and access to the internet are increasingly indispensable to realizing the right to education, governments should ensure affordable, reliable, and accessible internet service for all students. Poor and marginalized populations need discounted and free access to data, services, and computers.

Finally, any technology governments or schools recommend for online learning should protect children’s privacy rights. Governments and schools should immediately include data privacy clauses in contracts with Ed Tech providers to protect data collected on children from misuse. And governments should pass data protection laws for children.

Swift action to protect children from human rights abuses flowing from missed schooling is essential—and possible. As the Congolese mother explained, a child’s “future … becomes uncertain if the situation continues like this. Yes, we don’t want our children to get infected, but we want them to learn.”