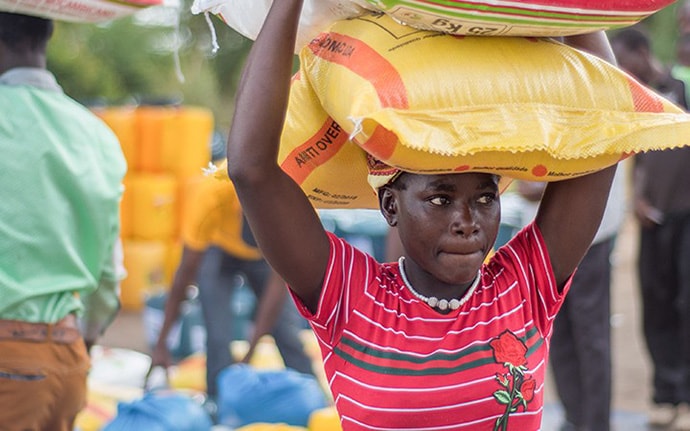 Last September, the world witnessed an unprecedented movement of young people raising their voices, demanding that their leaders take action on the global climate crisis. For millions of people across the world, standing up for climate justice isn’t just a passing trend; it is both urgent and necessary for a flourishing future.

Tearfund, a faith-based international aid and development organization, is among those taking action. We have seen firsthand how climate change is affecting those we serve. The problems produced by an unstable climate are undeniable and as a result, vulnerable people are being pushed back into poverty at an alarming rate.

In 2016, world hunger increased for the first time this century. Rising global temperatures and unpredictable weather patterns, such as frequent rains, floods, and droughts, are disrupting harvests and putting pressure on food supplies. And it’s the world’s poorest and most vulnerable people who are hit hardest. They often lack the resources necessary to adapt to the changing climate, and protections like insurance are not available to them. Not only are people losing their livelihoods but also their means of survival. Access to clean water, food, and shelter is growing scarcer. This instability forces many to flee their homes, contributing to the global migration crisis.

The injustice of climate change is that those most affected by it are those who have done the least to cause it.

The relentless consumption of some has not only caused climate injustice but has devastated our natural world. Since 1970, the populations of wildlife species have fallen by 60%. The more we consume, and the more our economies grow, the further our environment is pushed to the breaking point. Tearfund recognizes this and is committed to helping people live more simply and for a more sustainable future, both environmentally and economically.

“Data shows that the people least likely to support policy change to address climate justice are evangelical Christians. But data also shows that some of the most generous people giving financially to address global poverty are also evangelical Christians. As a faith-based organization we have a unique obligation to help our supporters within the Christian community understand the relationship between climate change, hunger, poverty, migration, lack of clean water, and other critical issues facing our world,” says Jason Fileta, interim CEO of Tearfund USA. “We believe God wants to see a movement of his people take action on climate change to secure justice for the poor and future generations.”

A holistic approach to justice is at the forefront of Tearfund’s work. We encourage supporters to not only give but also to pray, advocate, and live in ways that challenge injustice.

“Political advocacy is essential to see true climate justice. The challenge of climate change is so large that our own personal lifestyle changes will not be enough; we need policy change,” Jason says. Tearfund began its advocacy work in the early 1990s. With the combined efforts of supporters, partners, and staff, the organization continues to strive in influencing powerful decision-makers around the world to change unjust policies.

Solving the global climate crisis is still possible. It requires a new way forward – one that changes our consumption habits as individuals and nations, provides funding for the poorest communities in our world, particularly coastal regions and those communities dependent on agriculture to adapt to a changing climate, and finally, that finds alternative ways of living together that doesn’t devastate our environment or the world’s most vulnerable people.

Though the climate strike has long since passed, you can still raise your voice against climate injustice. I encourage you to sign this petition, urging our nation’s leaders to help the poorest in our world adapt to climate change through access to agricultural training and development, irrigation, and other solutions to build more resilient communities.