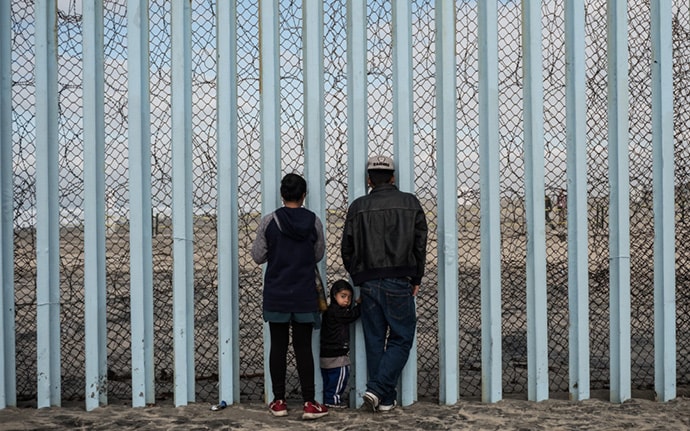 You are Salvadoran. Your name is Dani, you are 13 years old and your life is in danger. The MS-13 gang accuses you of being an informant for Barrio 18, its rival gang. Both criminal groups were born in the United States 30 years before your time. Now they control your country. You are innocent but you leave. Maybe there are two things that are worth more in the North: the dollar and your life.

You are Nicaraguan. Your name is Leslie, but your nickname is Managua, like the capital of the country where you no longer live. You are with your wife and your daughter in a migrant center in Costa Rica. You had to flee for protesting in the barricades against the repression of Daniel Ortega, a president who no longer represents you. You were targeted by a brutal paramilitary operation. You do not live in your country because political dissidence kills. Perhaps it’s best to never return.

These evocative descriptions by Elsa Cabria introduce a new photography exhibition at Seattle International Foundation (SIF). Entitled Nos Vamos (Let’s Leave in English), the exhibit features images by Central American photojournalists that invite the viewer to step into Dani or Leslie’s shoes for just a moment to understand the possibilities that millions of Central Americans cling to when they migrate.

SIF worked with grantee partners of its Independent Journalism Fund (IJF) to bring the harsh reality of Central America into view in Seattle. Featuring work by five photographers from four independent media outlets in Central America, Nos Vamos looks deeply at the phenomenon of migration, while highlighting the role of independent journalism in helping us understand critical moments like these.

Central America is a dangerous place to be a journalist. In Honduras, 67 journalists have been killed since 2003, with more than 90% of their cases still unresolved. In Nicaragua, security forces raided and took over the offices of two independent media outlets critical of the Ortega regime. In Guatemala and El Salvador, journalists who investigate powerful elites are under constant reprisals and confront many limitations to their work.

In the face of these dangers, independent media in Central America plays a pivotal role in examining and reporting on migration in the region. Reporters and photographers have closely followed the thousands of Central Americans who have fled their communities or their countries due to poverty, lack of employment and violence. Journalists not only tell these people’s stories, they denounce the dangers and abuses migrants face when crossing borders. They also investigate the political decisions and public policies behind the exoduses and pressure governments to address the crises quickly and responsibly.

In addition to this exhibit, SIF will host a discussion on Aug. 29 at 5 p.m. (click here to register for this free event) about the realities media outlets deal with in Central America while covering the region’s growing migration crisis. Journalists from El Intercambio (Guatemala), Contracorriente (Honduras), Confidencial (Nicaragua) and El Faro (El Salvador) will reflect on their experiences covering migration, sharing stories and photography that show the hope, strength and resilience of migrants throughout their journeys.