GLOBALWA.org / Our Blog / “Now I can’t be quiet” – When and why women speak out

EDITOR’S NOTE: Mara will be speaking on a panel, “Her Money, Her Voice,” at Global Washington on February 7, 2019, discussing women’s economic empowerment and political engagement. 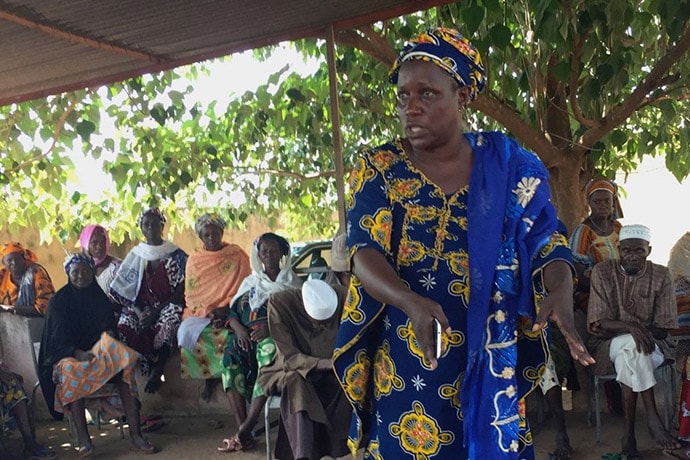 A woman in Sido, Mali, explains to the mayor why formal marriages are necessary to protect women from abandonment. This is a reality seldom explicitly spoken aloud in mixed company. In order not to alarm the men, the rationale for formal marriages is usually given in terms of access to educational and other benefits by children of formally married parents. But this woman is a poised speaker and plans to be a future politician. She speaks her mind even in front of the village elders seated behind her. (Photo courtesy of Oxfam).

What makes a woman speak out when everything about her context suggests it would be much easier to stay silent? In Mali, a country where women have historically held political and economic power, yet, where polygamy is common and women are largely subordinate to men, a woman decided to speak out.  She had participated in an Oxfam program that supports the development of women’s savings groups called “Saving for Change” (SFC) and provides basic civic education.  She worked with her peers to create a theatre performance for local officials to show the social impact of having poor access to water.  She wrote of her experience:

“Putting that piece together made us learn to speak, and now we can’t be quiet.”

This brought me back to the Women’s March in Boston a few weeks ago. The singer on stage sang the chilling feminist anthem “Quiet” by Connie Lim (aka MILCK) which echoes the same, universal sentiment:

But no one knows me no one ever will
if I don’t say something, if I just lie still
Would I be that monster, scare them all away
If I let them hear what I have to say

I’m further reminded of my mother’s story. Heading to vote in the 1964 U.S. presidential election, she told me that my father revealed to her who she should vote for. When she asked what made him think that this was his call, he stated – not without impatience – that she’d promised before God to “honor and obey” him when they’d gotten married. She told him that she had her own ideas and would vote as she pleased.

I have always been in awe of unentitled bravery. How does the MILCK take her moment of abject vulnerability (the song “Quiet” is related to her experience with gender-based violence) to a nation-wide anthem that has the power to unite and soothe? How does this Malian woman go from a position of very little bargaining power – namely, a situation in which men hold and dictate all of the resources available to her – decide to stand up to local officials? How did my mother, a religious woman, know that defying God in this circumstance was a perfectly appropriate thing to do?

The answer is deeply personal and different for each woman.  Recent research from Oxfam sheds some light on this question especially with respect to the relationship between women in successful savings groups and their political engagement.

“With SFC, the word is ‘liberated.’ Before SFC, I could barely express myself in front of more than three people. But over the years, my experience as group president and further training in Ségou (Mali) have given me the confidence to realize my opinion has value.  I may not be literate, but I ran as a candidate in the municipal elections last year anyway, and I’ll try again next year.”

This research confirms for me what I’ve long suspected. Ultimately, having economic resources alone doesn’t necessarily lead to greater political activism. However, economic resources together with experiences that enable a process of personal empowerment increase the likelihood of engagement.  In Mali, and likely in many places, variables in this equation include: 1) literacy levels, 2)access to civic education, 3) self-confidence, 4) the level of risk of social sanction, wherein “women avoid civic engagement for fear of transgressing their socially defined roles,” and 5) a political context where elected officials are responsive to their electorate. Basic economic stability, social capital and self-confidence are also critically important prerequisites to political action.

I continue to stand in awe of these and many other examples of bravery.  It can be hard to imagine being so brave.  But the feeling of connection and euphoria I felt standing with other women and men at the Boston’s Women’s march, gives me a window into how it is possible.

Mara is the Associate Director of Women’s Economic Empowerment in Oxfam’s Food Systems Theme. She has over 20 years of experience working in the fields of women’s empowerment, international development, and emerging markets finance. Mara is the global lead on the Women in Small Enterprise initiative, which includes Oxfam America’s first impact investing fund that focuses on women entrepreneurs in Latin America. Prior to Oxfam, Mara consulted with the Middle East Investment Initiative, a public-private partnership of the Aspen Institute, the Overseas Private Investment Corporation, and the Palestinian Investment Fund, to develop a new form of small business insurance to help Palestinian exporters hindered by travel restrictions. Prior to that she worked at the Federal Reserve Bank of New York as an emerging markets financial sector analyst. She has worked with various international finance and development organizations, including US Export-Import Bank, the Overseas Private Investment Corporation, and the World Bank. She has an MBA from Johns Hopkins University and a Masters in Foreign Service from Georgetown University. Mara speaks fluent Latvian and basic Russian.