GLOBALWA.org / Our Blog / Q&A with PATH’s director of HIV and TB program about the launch of a national program in Vietnam to reduce new HIV infections 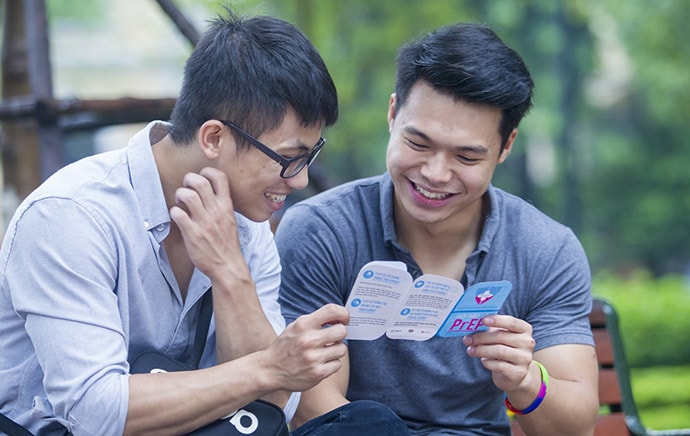 Why is PATH advocating that pre-exposure prophylaxis (PrEP) be made widely available in Vietnam? What lessons did you learn during this process?

PATH is a trusted partner of the Vietnam Ministry of Health (building off of nearly 40 years of work together), and is known and appreciated for facilitating introduction of new, impactful health technologies and approaches. Most recently this included piloting and then scaling HIV lay and self-testing. From 2015, when WHO first included PrEP as part of global HIV prevention guidance, the USAID/PATH Healthy Markets project fostered technical consultations with the MOH to determine if, when and how PrEP would be introduced. With concerns over increasing HIV prevalence among key populations and a growing demand for new HIV prevention options, the MOH agreed that PrEP be included in the HIV 5-year action plan and to pilot PrEP service delivery. Another step that was critically important was working with men who have sex with men (MSM) and transgender women (TGW) to better understand demand, willingness to pay and service delivery preferences for PrEP.  Once the MOH and the USAID/PATH Healthy Markets project had agreement on the service model, a pilot launched in March 2017. The results were very rapidly positive so the MOH decided to use the preliminary results to add PrEP to national HIV clinical guidelines. This led to greater support within and outside of Vietnam to support the scale-up of PrEP. The recent launch is a result of this cumulative commitment to scaling PrEP and accelerating the reduction of new HIV infections in Vietnam.

Thailand was the first country in Asia to roll out a national campaign to make PrEP available and affordable to individuals at high risk of contracting HIV. Now Vietnam has done the same. What does this mean for the rest of Asia?

Other countries in Asia are either piloting or considering PrEP roll-out and the experience in both Thailand and Vietnam may help to inform their own plans for national adoption and scale of PrEP.

Vietnam’s PrEP program can provide a model for engaging those affected by HIV directly in prevention efforts.

Vietnam’s research into cost-effective and innovative funding models for PrEP, including engaging private sector stakeholders in shared value partnerships, can also provide a blueprint for introducing new HIV prevention strategies in the face of reduced international funding for the AIDS response, as many countries in Asia transition to lower middle-income economies.

How do the rates of HIV infection in Asia compare to Africa, or Latin America? Why is Asia a particularly big push right now?

Global data shows that while the majority of people living with HIV are in East and Southern Africa, the reduction in new HIV infections has also been the strongest in this region while other regions, such as Asia and Pacific and Eastern Europe, are starting to lag behind Africa in their HIV response.

2017 estimates for the Asia and Pacific region indicate that only 57 percent of all people living with HIV are on treatment, with just 45 percent being virally suppressed and no longer transmitting the virus. While prevention programs have succeeded in reducing new infections in the Asia by 14 percent since 2010, progress has slowed in recent years with new HIV infections rising in some countries, such as Philippines and Pakistan, and with increases in new HIV infections among men who have sex with men.

Regions that are falling behind in their HIV response, including Asia and Pacific, are those where the epidemic is primarily concentrated in key and higher-risk populations—groups who are harder to reach due to stigmatizing laws and cultural norms that deter individuals from accessing HIV testing, treatment and prevention services. Consistent condom use among some key populations remains low, with studies indicating that nearly half of men who have sex with men in most major Asian cities use condoms inconsistently, and other sexually transmitted infections such as syphilis, gonorrhea and chlamydia are on the rise. Business as usual is no longer enough to curb new HIV infections among key populations. The scale up of PrEP is critical for controlling and eventually ending the HIV epidemic.

How does PrEP fit into broader efforts to halt the spread of HIV and support people who are living with the disease?

Oral PrEP received a strong recommendation based on high quality evidence from the World Health Organization (WHO) in 2015. When taken as directed, PrEP can reduce the risk of HIV infection by 92 percent or more. This makes PrEP an important and high impact tool when combined with efforts to reach global United Nations 90-90-90 goals to fast track an end to the AIDS epidemic by 2030. Cities that are offering scaled PrEP together with HIV test and treat strategies – including San Francisco, New York and London, have seen 30-50% reductions in new HIV infections as a result. Importantly, PrEP has been modeled as a cost-effective strategy in a number of settings, both high and low income.