GLOBALWA.org / Our Blog / Violence Against Women in Central America is a Powerful Factor in the Migration Crisis 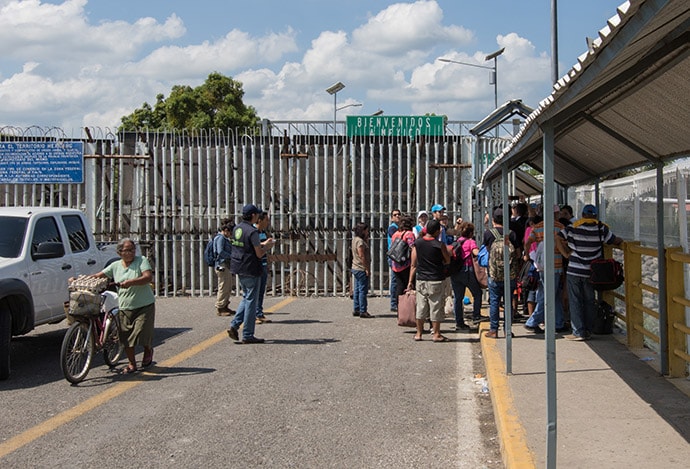 Asylum-seekers listen to a Mexican official explain the procedures they will be asked to follow. Credit: Elizabeth Stevens/Oxfam America

As stories of the migrant caravan dominated U.S. headlines this fall, I found myself in a woman’s shelter in the Honduran capital of Tegucigalpa listening to stories of extreme violence and heartbreaking courage.  I heard the story of a 7-year-old girl named Valeria who was given a choice between staying safe in this shelter or going back to her abusive father who could pay her school fees – Valeria chose to go to school.  Now, my 7-year-old daughter will never have to choose between her education and her safety. But millions of girls in Central America do not have that choice.

As I traveled last month with Oxfam throughout the Northern Triangle – to the countries of Honduras, Guatemala, and El Salvador – I heard gut-wrenching stories of gender-based violence and poverty, hunger, and gangs. It became clear to me the migrant caravan is more than a humanitarian crisis or an immigration issue.

In fact, the caravan is a protest against the denial of human rights and failed public policies in Central America supported by the United States for decades.  Now migration from Central America to the United States is not a new phenomenon and has been happening for decades. But what is historic about this fall’s caravan is that thousands of people have chosen to leave together in a public exodus.  People in the region are publicly now talking about how their states have failed them. And many more will continue to make this difficult and dangerous journey because people will do what they need to do just to survive.

This is especially true for women and girls who bear the brunt of violence and poverty in Central America. Just look at Honduras, a country with the population of New Jersey, where one woman is murdered every single day.

Or take the horrific incident of March 8, 2017 in San José Pinula, outside the capital of Guatemala, where 56 girls were locked inside a room at a government-run children’s shelter for organizing a protest against sexual violence, physical abuse, and other sickening conditions they faced at the shelter.  That night, a mysterious fire killed 41 of those girls despite their cries and shouts for help.

Today, the case is still not resolved.  During my visit to Guatemala City, I met with women’s rights advocates and Guatemala’s Human Rights Ombudsman who are fighting every day to see that justice is served in this case and so many others where impunity reigns rampant. They contend that the failure of the state to protect its own people, particularly women and girls and those from poor, indigenous communities, is tearing the country apart.  “The stories of this country are written in blood and fire,” Maya Alvarado from the feminist publication La Cuerda told me bluntly.

Political capture of the state combined with deeply rooted patriarchal attitudes and a machista culture has led the Northern Triangle countries to have some of the highest rates of poverty and violence in the world.  According to the Latin American Working Group, women and girls bear the brunt with high levels of homicide, sexually based violence, forced disappearances, and kidnapping in these countries.  To make things worse, high levels of corruption and impunity in the criminal justice system mean women do not turn to the state for justice while violence continues to be normalized as a way of life.

High levels of violence also affect access to basic services such as health and education. Young people are especially vulnerable as they face human trafficking and sexual violence and are routinely abducted or coerced into carrying out surveillance, joining gangs or informing for armed groups. In recent years, studies show that 95% of homicides in these countries have gone unpunished.

The statistics are mind-numbing and chilling. But what I saw during my journey in the Northern Triangle is that people are now pushing back and saying “Basta!” or enough. Some are choosing to leave their homes and country altogether to try to make it to safety in the United States.  Others are staying and fighting for change like those I visited in the northern El Salvador town of Ahuachapán, home to the Shaira Ali Center, which Oxfam helps fund. Here, over 600 girls, boys, and women who have suffered violence are rebuilding their lives based on gender equality, human rights, and dignity.  They are working with community leaders and even government officials to show how communities can be resilient and healthy when we invest in women and girls. 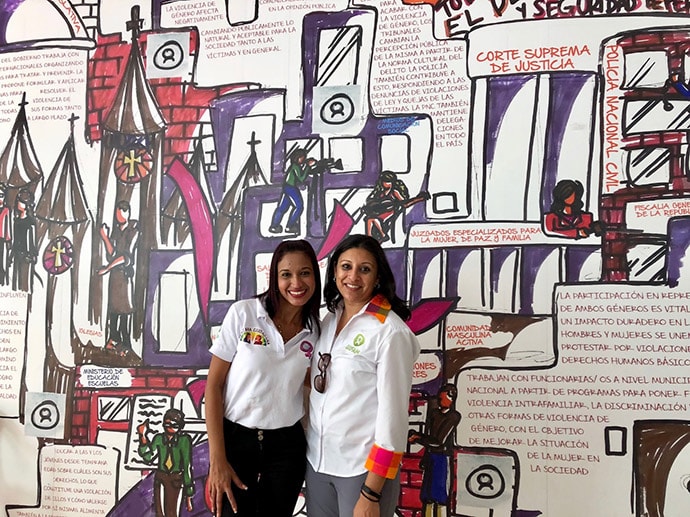 At the Shaira Ali Center in El Salvador, Fatema Sumar, Oxfam Vice President of Global Programs (right) stands with Karla Gutiérrez (left), the leader and coordinator of a group of young women of the Getsemaní community. Photo: Oxfam El Salvador.

In fact, providing safety and services for women and girls should be at the heart of our approach to the region. U.S. policies in particular should be rights-based, support anti-corruption efforts that help the poor, focus on community-based violence prevention strategies, advance sustainable rural development and access to justice, and fight sexual and gender-based violence.

Unless we address these structural drivers of migration from Central America, the caravans will grow and multiply because people are just so desperate to survive and live with dignity.  It is time for a different approach, putting the needs of the people of the region – particularly women and girls – front and center.

Read more about Fatema’s trip in her Twitter chronicles: