GLOBALWA.org / Our Blog / Congressman Adam Smith Meets with the Global Development Community in the State of Washington 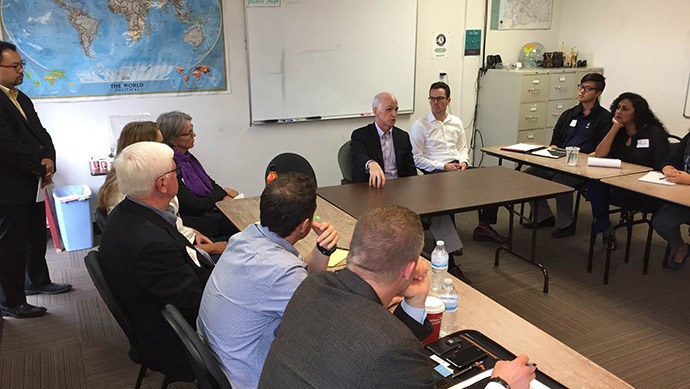 On September 18th, together with Global Washington, Congressman Adam Smith met with about two dozen members of Washington-based non-profits to discuss issues of concern to the global development community. The meeting was held at the offices of World Relief Seattle in Kent, WA.

Numerous participants took the time to thank Congressman Smith for his dedication to defending global development. He remarked that it is not only a moral issue, but that it also protects Americans’ vital interests: “One of the goals of U.S. aid is to increase stability abroad, and reduce the displacement of people,” said Smith.

After highlighting the gains that have been made around the world thanks to the global development community, such as significant reductions in childhood mortality and infectious diseases, Congressman Smith noted that there are more displaced people today than during World War II. As part of the displacement conversation, American immigration policy on Deferred Action for Childhood Arrivals (DACA) was raised as a major concern to local communities, as well as the roll-back on resettlement in the U.S. of refugees fleeing violence and oppression in their home countries.

Two participants drew the congressman’s attention to the importance of supporting small organizations, whose work is critical to the health and security of many vulnerable communities. The congressman agreed, and pointed to the need for network organizations such as Global Washington to help them get connected to the resources and partners they need to be most effective.

In closing, Congressman Smith encouraged those assembled to stay engaged in the political process. “The one thing that concerns me most is if America gives up on itself. The more people who walk away, the more power the few have. So get organized, and go talk to people.”