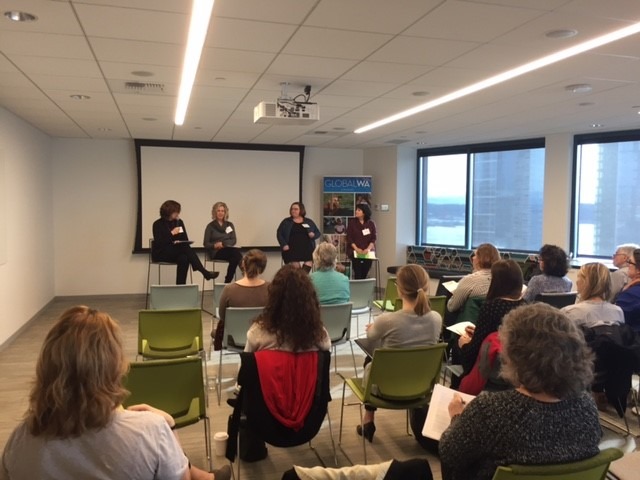 The panelists spoke about the work their organizations are doing and how increasing opportunities for women also benefits their communities.

Eileen Moncoeur touched on the huge political changes happening right now in Myanmar.  After a long dictatorial rule, the country is slowly opening up to change, resulting in more opportunities for women in the country. Despite a peaceful election in 2015, however, there is still a substantial amount of violence in the country.

Turning the conversation to Central America, Kelly McDonald discussed the work of Agros International, which seeks to develop communities and help people pull themselves out of poverty. Agros’ community partnerships generally last between seven and ten years, and their work tends to focus on the needs of the community as a whole, not just women.

Finally, Tzili Mor walked through how Landesa partners closely with local governments across China, Myanmar, and Sub-Saharan Africa, providing socially equitable access to land. Landesa believes that in order for programs to be successful, governments must be involved and want to take ownership of the process.

A huge issue for all three organizations is the question of inheritance. With only one signature space provided on most land titles, women are rarely listed alongside their husbands or other family members. As a result, land is automatically transferred to the closest male relative following the death of a father, husband, or brother. This places women in an exceedingly precarious position. One workaround that land rights organizations have found surprisingly effective is advocating for land titles that include space for two signatures.

When the audience was invited to ask questions of the panelists, one person asked about the intersection of climate change and land rights. Surprisingly, panelists said that the Paris Agreement on Climate Change had failed to mention the issue of land rights, which they felt was a major oversight. Other panelists noted that climate change is already affecting how people use their land, with women and men impacted differently.