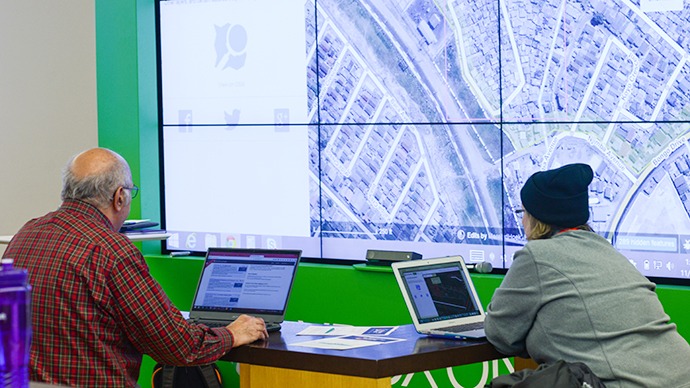 It’s safe to say that the world we live in today is full of global collaboration and innovative communication. This is especially relevant given that every day we are influenced by images of humanity (or crimes against humanity) that encourage us to reflect on how we, as individuals, fit into the greater context of society. It prompts us as global citizens to seek out how we can participate as humanitarians and connect in a cross-cultural context, while having a broader impact to affect positive change from our home here in the Pacific Northwest.

In this interconnected world, you can be an international volunteer by working on a laptop from your kitchen or local coffee shop. A new technology is allowing us to put the world’s most vulnerable populations on the map before disaster strikes. Missing Maps is a partnership between the American Red Cross, the British Red Cross, Medecins San Frontieres (Doctors Without Borders) and the Humanitarian OpenStreetMap Team (HOT). Individuals work as virtual volunteers to trace the outlines of buildings and roads on open source satellite images provided for the project. Each project has a specific humanitarian mission which can only come to fruition once the maps are completed by volunteers.

The projects run the gamut from monitoring house fires in shanty towns in an attempt improve emergency response to tracking the spread of communicable diseases (think Ebola) to better coordinate public education. These completed maps are then sent to volunteers in the country being mapped for verification. In-county volunteers work in teams, using the maps created by global volunteers, to add street names, label neighborhoods and make any necessary corrections to the communities in their home country. Once the map has been verified it is uploaded as an open source map which can be used by anyone around the world for preparedness work and disaster response.

If you are like me, you’ve seen or experienced the lack of infrastructure that characterizes many parts of the world. Perhaps it’s a dirt path that serves as the only link for a remote village, vulnerable settlements constructed without bricks and mortar or densely populated cities that are rife with illness due to the lack of urban planning that puts the population at risk. By mapping these hard-to-reach places we help local and international NGOs responding to the crisis to be be as prepared as possible. They can use the completed maps in comparison with the situation on the ground after a major event to get a much clearer scope of the destruction and which populations are in the greatest need of assistance.

For anyone who wants to have a hand in healing the world, there is a standing, open invitation to join the global Missing Maps team. Since September, we’ve trained 500 virtual volunteers. That represents an incredible groundswell of local humanitarians who have connected with communities across the globe. Because of extreme weather events, natural disasters and conflicts, maps are always changing and the mapping is never done. The good news is there is a user-friendly program that can replace endless time spent surfing the web, and it’s fun, engaging and impactful.

Want to connect with the world? What more could you ask for?