“What price tag can you put on a human life?”

The UN Secretary General’s Special Representative for Sexual Violence in Conflict, Zainab Hawa Bangura, answered her own question by reading the “price list” used by ISIS in what she called “nothing short of a revival of the slave trade.” 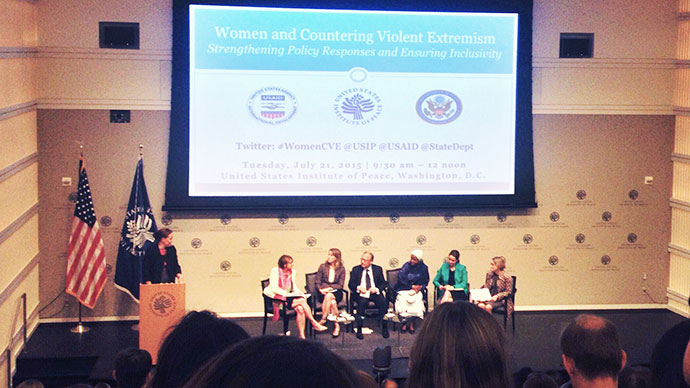 On July 21, 500 guests gathered at the US Institute of Peace (USIP) for a distinguished discussion on Women and Countering Violent Extremism (CVE) and sat riveted as Ms. Bangura detailed the ways in which extremist groups use women as currency while they sell, barter and incentivize recruits in their efforts to consolidate power.

The event brought together thought leaders at the forefront of academia and action on women and CVE, including representatives from USAID, the State Department and Homeland Security, to address the fact that, according to USIP, “Fifteen years after the United Nations Security Council vowed to reverse the broad exclusion of women from leadership in security and peacebuilding,” in reference to UN Security Council Resolution 1325, “they remain marginalized.”

While women are disproportionately affected by conflict and violence, Robert Berschinski of the US Department of State emphasized the need to “speak not about women as victims, but as essential actors in the cause of preventing radicalization,” unanimously agreed upon as one of the largest threats to the United States.

Ambassador Anwarul Chowdhury said in clarification of SCR 1325, it “is not to make war safe for women, but to structure the peace in a way that there is no reoccurrence of war and conflict.”

Throughout his remarks, Ambassador Chowdhury’s stressed participation. “Peace is inextricably linked between equality between men and women,” he said, echoing sentiments of others at the symposium.

He also emphasized the paramount importance of National Action Plans (NAPs) in speeding up the implementation of SCR 1325, despite only 43 of 198 member states having prepared their NAP, which he believes has drastically undercut its efficacy.

Throughout the two and a half hours of expert presentation, the point hammered into the audience was that the issue of gender equality in politics, conflict resolution and CVE is not only a matter of what is right, but what is necessary. Of this, Ms. Bangura went as far as to say, “If we have to depend on men, we’ll never defeat ISIS.”

Ambassador Chowdhury concluded his speech by saying the slogan of the day should be, “Women and men, together, we have the power to empower.” This is a power we must exercise in what Ms. Bangura states, “is ultimately a fight for our future.”

Click here to watch the video of the event.