GLOBALWA.org / Our Blog / Roundtable Recap: A Discussion with Kentaro Toyama 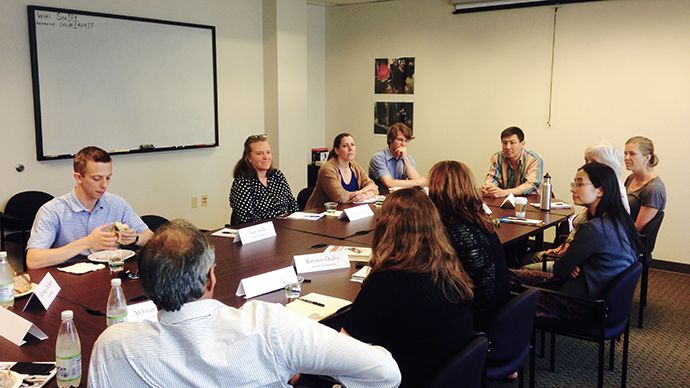 On June 24, Global Washington members gathered to meet Kentaro Toyama and discuss his new book, Geek Heresy: Rescuing Social Change from the Cult of Technology. An award-winning computer scientist and co-founder of Microsoft Research India, Toyama spent more than a decade designing technologies meant to address education, health and global poverty before coming to a radical conclusion. “Even in an age of amazing technology, social progress depends on human changes that gadgets can’t deliver,” says Toyama. This conclusion is the crux of his book, in which he argues that technology is not the solution to society’s greatest ills.

Toyama spoke of multiple instances in which he witnessed technological projects perform well during research and development, but then fail miserably in the field. The technology sometimes did nothing to solve a particular problem, and sometimes it even exacerbated the issue. Toyama came to believe that people had to stop throwing technology at problems and expecting magic because technology alone is too limited to fix any one problem. It can’t dismantle existing barriers to progress such as social inequality or corrupt institutions. If free speech isn’t part of a society to begin with, for example, giving people internet access won’t fix that because governments can censor people’s online activity. Technology, according to Toyama, doesn’t add to a society in so much as it amplifies preexisting characteristics, both good and bad.

Some may be surprised to hear a man who has dedicated his life to technological innovation encouraging people to become less focused on the power of technology. Perhaps for this reason, roundtable participants had numerous questions and there was plenty of insightful conversation. Some of the topics discussed included: the roles for-profit and non-profit institutions should play regarding the dissemination of technology; the relationship between technology and democratization; and the future role technology will play in international development.

People, Toyama says, seem to have become more interested in being known for creating the thing that change’s people’s lives than they are in actually changing lives. The message Toyama left roundtable participants is that those developing technology must stop focusing on profits and recognition and start focusing on people and relationships. When technology is designed to help people fulfill their aspirations, great things can happen.