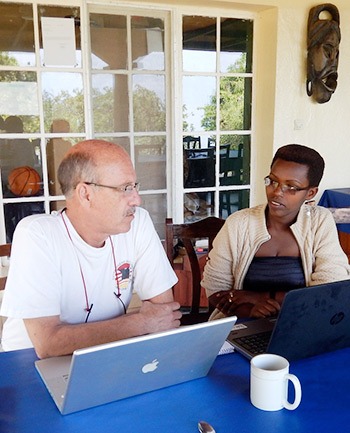 Darrell Johnson, a member of GlobalWA member Pangea, spent 8 weeks in Burundi last summer working with Village Health Works, another GlobalWA member. Darrell was invited by Deogratias “Deo” Niyizonkiza, VHW founder and 2013 GlobalWA Conference keynote speaker, to help with operational and financial planning for the building of a new Women’s Health Pavilion in Kigutu. Darrell recently shared his experiences with Pangea’s Africa pod, as they continue to explore grantmaking opportunities in Burundi. Here is some of what he shared.

Burundi is a small country in Central East Africa with about 10 million inhabitants and a complex and dynamic history. Until the end of World War I, it was a German colony known as Urundi. The end of the war resulted in Germany losing the colony and Belgium being the beneficiary. In 1959, Urundi was divided into two separate countries, Rwanda and Burundi. Three years later, Burundi gained its independence but independence did not lead to peace and prosperity. Tribal antagonisms emerged leading to two periods of genocide, first in the early 1970′s and again in the 1990′s, resulting in approximately 500,000 deaths. The last civil war that ended in 2005 left Burundi’s population traumatized and living in extreme poverty.

Deogratias “Deo” Niyizonkiza was a third-year medical student in the early 1990’s and a member of the tribe that was the primary victim of this genocide. With the help of friends, he was evacuated to New York and arrived with very little money and speaking only French and Kirundi (Burundi’s local language). In spite of this, after a few years, Deo had acquired two Bachelor’s degrees from Columbia University, a Master’s in Public Health from Harvard University, and was a student at Dartmouth University Medical School. Rather than working as a physician in the U.S., he elected to return to his home, Kigutu in southern Burundi. Village Health Works was formed and, with the help of villagers, Deo built a clinic, followed by an agricultural program addressing malnutrition, and finally a school.

Today, villagers meet every Friday to level by hand the land where the Women’s Health Pavilion will be built to address a high maternal mortality rate. Darrell was struck by the perseverance and drive of Burundi’s people. He enjoyed hearing them sing as they worked on the land while Darrell did financial planning and worked to improve accounting systems. 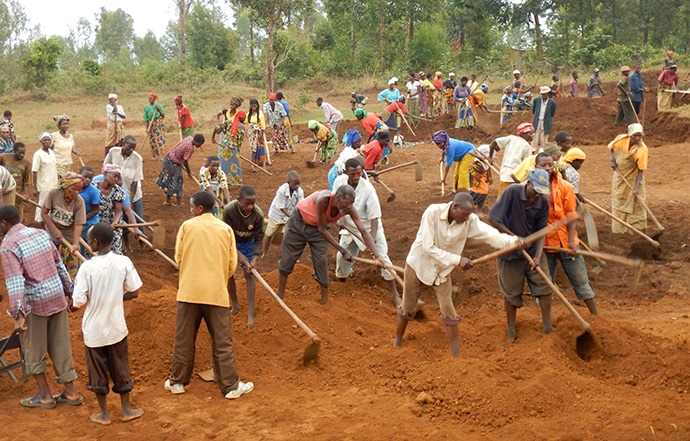 Community members leveling the land where the new Women’s Health Center will be built.

Darrell introduced Days for Girls sanitary pads, which are being considered for widespread distribution to help local girls stay in school. He also helped introduce a model chicken coop to expand the consumption of eggs and to further address malnutrition.