GLOBALWA.org / Our Blog / Healing Hearts in a Country with Plenty of Broken Ones

Healing Hearts in a Country with Plenty of Broken Ones 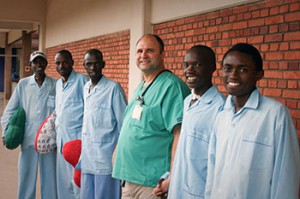 The 1994 Rwandan genocide crippled the country, leaving it torn by violence and death on a massive scale. The recovery from this atrocity was made more difficult because an estimated 75 percent of the Rwandan medical community was murdered or forced to flee the country, which left the healthcare system in shambles. The situation has since improved, however, there are still only about 400 physicians to treat a country of more than 11 million people.

Healing Hearts Northwest (HHNW), a Spokane-based Global Washington member, works to remedy this situation. Founded in 2008, HHNW began with a meeting in Rwanda’s King Faisal Hospital, which then inspired subsequent medical missions to perform operations on Rwandan patients. HHNW continued to provide medical training and equipment so that the hospital could better manage acute patient care and better handle complex patients. HHNW hosts annual training seminars and lectures for Rwandan nurses and physicians, and obtains funding for equipment that improves the capabilities of Rwandan medical facilities.

According to the World Health Organization, Rwandans, despite recent improvements to funding of the country’s health care systems and organizations, have an average life expectancy of approximately 63 years. About 253 people per 1,000 die between the ages of 15 and 60, and 55 in 1,000 people die before the age of five. These figures suggest that organizations such as HHNW have embarked upon a difficult yet vitally important endeavor, and there is still much work to do.

Visit Healing Hearts Northwest’s website to learn more about the organization, read stories from their trips and help in their efforts to improve healthcare in Rwanda.