More than 600 million adolescent girls around the world are struggling to survive child marriage, pregnancy, poverty and disease. We can help them by using research to find the right tipping points and partnerships, according to Sarah Degnan Kambou, president of the International Center of Research on Women.

Kambou discussed the ICRW’s work at a Sept. 16 lunch meeting at Seattle’s World Trade Center, including representatives from the Bill and Melinda Gates Foundation, PATH and Landesa. 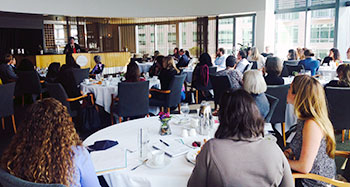 “Sarah is truly a global leader on women’s and girls’ issues,” said Scott Jackson, president and CEO of Global Impact, which co-hosted the event with Global Washington.

For nearly 40 years, ICRW has been the premier applied research institute focused on women and girls, providing evidence-based research to inform programs and policies that help alleviate poverty, promote gender equality and protect the rights of women and girls. During her distinguished career working with women and girls in Asia, eastern Europe and sub-Saharan Africa, Kambou said the conversation has finally shifted from “why” do we care about helping women and girls to “how” do we best help them.

“It’s about implementation today,” she observed, emphasizing the importance of using data to drive social change in measurable, strategic ways.

A holistic perspective must address a combination of economic and social development factors, she explained, ranging from securing women’s property rights to improving access to reproductive health services. For the world’s vulnerable adolescent girls, improving vocational training opportunities can be the most powerful incentive for their families to delay marriage and motherhood a few more years.

“It’s hard for a girl to put off getting married unless she has an alternative for economic stability,” she said. 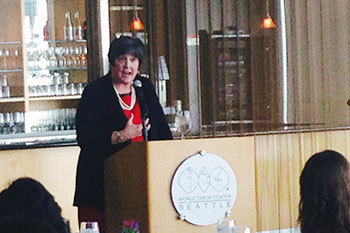 Bringing more men to the conversation, partly by appealing to them as fathers, is also a crucial component of securing women’s rights, the audience agreed. And America’s own economic, legal and cultural norms, including the debate prompted by the NFL’s response to the Ray Rice domestic violence controversy, have room for improvement.

“We need to be as vigilant in confronting violence against women in our society as we are passionate to confront it in the context of developing countries,” said Chitra Hanstad, a philanthropy advisor to the Seattle Foundation, who attended the presentation. “We need to apply the most effective strategies, that we develop from our work all over the world, both here at home and abroad.”

Around the world, Kambou and several audience members agreed, earlier interventions are needed to break generational cycles of poverty and create better futures for women and families.

“We want adolescent girls to be seen as an investment,” Kambou concluded. “It’s time to really move ahead.”