It’s widely recognized that environmental issues can have detrimental effects on economies. These can, at times, be difficult to observe beyond statistics and researched predictions, but one current issue has already created significant and observable effects. This is the problem of overfishing.

The figures surrounding this issue are somewhat staggering. According to the UN, 17% of fish stocks worldwide are overexploited. 52% are fully exploited, and 7% are depleted. This leaves the world with an estimated 20% of worldwide fish stocks that are not yet at or above harvesting capacity. Furthermore, 90% of large fish stocks have been depleted, due to the targeting of fish at the top of the food chain for their size. The unintended effect of this practice has led to imbalances within marine ecosystems. Because of the disproportional depletion of larger fish, their prey (smaller fish) are becoming more abundant. Ecosystems struggle to adapt to such rapid change, and the ending result can be a cascading effect in which many species, not just those being fished, are harmed1. 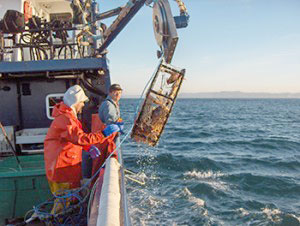 These fragile marine ecosystems do not exist in a vacuum; the damage done to them can potentially damage the health and livelihood of humans everywhere. Worldwide, about a billion people rely heavily on fish for protein and nutrients, particularly in small coastal settlements and food-insecure regions of Asia and Africa. People working in small scale fisheries, such as those in developing countries, account for over 90% of the worldwide fishing industry. About half of these workers are women. Even at home, the U.S. fishing industry generates $199 billion in revenue along with 1.7 million jobs.

Efforts to remedy the overfishing problem are led by groups such as the Marine Stewardship Council (MSC), a Global Washington member with a regional office based in Seattle. The MSC works to change the culture of the fishing industry by labelling responsibly caught fish so that customers can make educated purchases. In this way, the MSC provides incentive for companies and retailers to continue to use responsible practices.

Filed under: Our Blog • Tagged with: FAO, Fishing, Food and Agriculture Organization of the United Nations, Global Washington, Marine Stewardship Council, UN
Become a Member
Subscribe to Our Mailing List