GLOBALWA.org / Our Blog / Demographics of Youth in Sub-Saharan Africa

Demographics of Youth in Sub-Saharan Africa

July 11 was World Population Day and no region of the world is feeling the impact of demographic change like sub-Saharan Africa. More than half of the growth predicted by 2050 is expected in this region, where the number of people is set to more than double, from 1.1 billion to 2.4 billion. Within the same period, Nigeria’s population is expected to surpass that of the United States. Of course, sub-Saharan Africa is not the only region to experience this phenomenon, as the most rapid increases are expected in the world’s 49 least developed countries1. However, what makes the region unique is the growth of its overwhelmingly young population.

According to the World Bank, 62 percent of the population of sub-Saharan Africa, more than 600 million young people, is below the age of 25, and this population also represents three-fifths of the region’s unemployed. Its share of the world’s working-age population (ages 15-64) is set to double from about 10 percent in 2010 to about 20 percent in 2050 – to 1.22 billion people2.

While sub-Saharan African economic development is fraught with many challenges, including commodity booms and busts, political instability and climate change, to name a few, it is imperative that Africa’s governments and development community work to leverage the talent and energy of Africa’s youth to promote economic change. As the 2014 African Transformation Report explains, the young and growing workforce can either provide global competitive advantage and a great asset in driving economic transformation, or it could be a drag on growth and a threat to social and political stability. 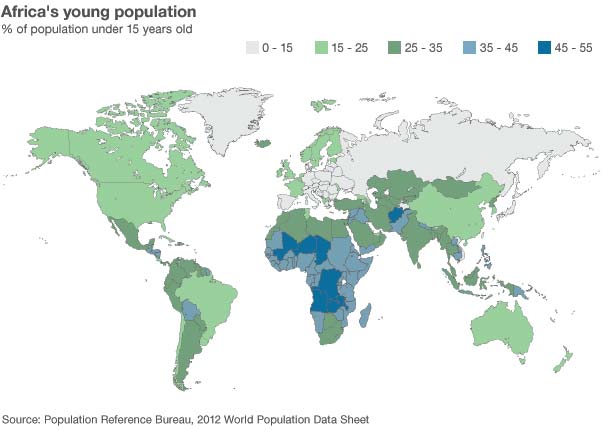 The focus on Africa’s youth is no revolutionary concept, but the importance of harnessing the power of youth is becoming increasingly more urgent. In 2012, African Economic Outlook published its annual report with a highlighted theme of “Promoting Youth Employment.” The report said that although Africa’s economic growth has outperformed the global rate in the last decade, and the youth population is becoming better educated, if Africa fails to continue to create better economic and employment opportunities for this group, large sections of this population will be left behind, becoming more frustrated and causing a threat to political stability and social cohesion. According to the World Bank, one in two young people who join a rebel movement cites unemployment as the main reason for doing so. The International Labor Organization has reported that from 2000 to 2008, Africa created 73 million jobs, but only 16 million for young people aged between 15 and 2413.

As populations, especially of young people, continue to grow, demands for social services, specifically in education and health, continue to rise. Governments will need to invest increasingly in these sectors to catch up with population growth, which can be extremely difficult under African political climates that are plagued by policy inaction. Inaction on the education and health of Africa’s youth could be catastrophic. Long spells of unemployment or underemployment in informal work can permanently impair future productive potential and employment opportunities, hugely impacting young people’s future professional development4.

In early July, the United Nations released its annual Millennium Development Goal (MDG) report, the last report before the 2015 deadline set for the eight program goals. The UN commented that, although steady progress has been made on many of the MDGs, population growth is one challenge that may make reaching numerous targets by 2015 unlikely. While the World Bank made moves to address the importance of higher education in promoting economic growth and development for the growing youth population through its implementation of the Africa Higher Education Center of Excellence project in April, the responsibility also falls heavily on Africa’s governments working in partnership with development institutions to put the emphasis on harnessing the power of their inevitably growing youth population.

Africa’s population shows little sign of slowing down, and we cannot afford to leave youth behind. While demographic changes provide many challenges, the development community must remember the importance of working with the booming youth population, and the magnitude of providing educational opportunities, employment and skill development to invest in the great potential of this community.