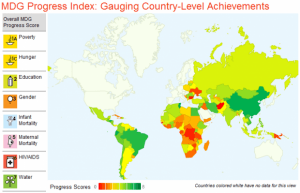 The Center for Global Development recently released a new online interactive map tool to gauge progress towards the Millennium Development Goals (MDGs) at the country level.  Through this tool, the CGD ranks countries on their overall progress on the 7 indicators with a score of 1-8.  When you click on a country, you will see seven graphs showing observed progress on each of the indicators against the required progress to meet the goals by 2015.  The seven indicators are: halve extreme poverty (people earning under $1.25/day); halve the proportion of the undernourished population; achieve universal primary education; achieve gender parity in schooling; reduce child mortality by 2/3; reduce maternal mortality by 3/4; halt and begin to reverse the spread of HIV/AIDS; and halve the proportion of people living without access to safe drinking water.

Four countries are tied for best progress to date, with a score of 7: China, Ecuador, Honduras, and Tunisia.  The next few countries in the top 10 performers include Brazil, Egypt, Iran, Jordan, Kyrgyz Republic, Laos, Lebanon, and Vietnam, with scores of 6 to 6.5.  The worst performers, ranked in the 130s, include Burundi, Bulgaria, Congo-DRC, Marshall Islands, Afghanistan, and Guinea Bissau.

The map also shows which countries are the best and worst performers in each of the seven indicators.  A quick glance at the map shows the most progress globally in access to safe drinking water, and the least progress in halting and reversing the spread of HIV/AIDS.