Home / Our Blog / Dr. Ignacio Mas on Mobile Banking for the Poor

Dr. Ignacio Mas on Mobile Banking for the Poor 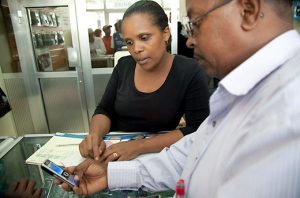 On June 8, Dr. Ignacio Mas—deputy director of the Bill & Melinda Gates Foundation Financial Services for the Poor Program—delivered a special evening presentation at the Frye Art Museum on the topic of mobile banking for the poor.  The focus of Dr. Mas’ talk was M-PESA, a new SMS powered savings deposit and withdrawal platform that the Gates Foundation has been funding through its pilot stages in Africa over the past several years.

The event was hosted by SeaMo, a Seattle based non-profit organization that serves to connect the microfinance community through events, online services and opportunities for collaboration.

The Bill & Melinda Gates Foundation financed M-PESA in Africa to address a side of the financial services equation in the developing world that has been thus far severely neglected: savings accounts for the poor.   M-PESA was designed to target the segment of the world’s population that is earning less than $2/day and is eligible to work.  For a typology of this 1.8 billion people adapted from Dr. Mas’ presentation, please refer to the table below.

Table 1 Gates Foundation typology for the 1.8 billion eligible workers in the world living on <$2/day[1]

M-PESA operates through a text message based application that allows an intermediary to accept cash deposits and input the amount for the depositor via mobile phone into a secure electronic savings account.

For the majority of the world’s poorest, few options exist for secure, accessible, and low transaction cost savings deposit accounts.  Currently formal avenues for savings account services are, by and large, prohibitively expensive due to the sheer cost of transporting hard currency that they entail.  The bulk of the world’s poorest are concentrated in rural areas where transportation infrastructure is often limited, circuitous or unreliable.   When a client is only able to deposit in small or sporadic increments, the transaction costs can easily negate the value of the transaction to any provider.

Apart from the few formal savings services that may be available to the world’s poorest, deposit arrangements arising through informal channels come with a host of other problems.  Informal savings agreements can be unreliable; they are often not private; and they render clients susceptible to exploitive agreements.

Dr. Ignacio explained that the Gates Foundation sees three primary groups of existing resources that lend can be maximally leveraged in the roll out of M-PESA’s services.

1)      The “Bricks and Mortar” of existing retail shops and central community buildings.  Rather than constructing new buildings to serve as deposit locations, Gates Foundation looks to market M-PESA as a secondary activity within already active enterprises or community spaces.

2)      An already widely deployed communications network.  Mobile phone networks are quickly approaching omnipresence, delivering 3g capability and cellular phone service today to even some of the most remote areas of the world. With M-PESA, these networks will allow poor and geographically marginalized communities to receive the same real-time, low-cost transaction capability that is enjoyed in the richest countries in the world.

3)      The rapid spread of mobile phones.   Inexpensive and often the only telecommunication option available for those living in rural areas, mobile phones have spread to the hands and communities of even the poorest in the world.  By charging phones with the rudimentary capabilities of an ATM machine, using M-PESA’s services involves very little new investment, change in normal behavior, or training.

The primary public burden of M-PESA, by Dr Ignacio’s characterization, is found in the costs of regulation.  Ensuring that retailers providing M-PESA’s mobile phone based cash deposit services are not exerting monopolistic pricing and exclusive practices on poor communities is a real, and potentially very costly, regulatory challenge to effectively address.  A challenge which requires a regulating entity more credible and responsive than typically exists at the status quo in the national governments of most developing countries.

Conspicuously absent from the existing resource bases that the Gates Foundation seeks to leverage for the roll-out of M-PESA’s services are the government institutions of recipient countries.  Instead, the Gates Foundation funds the Alliance for Financial Inclusion(AFI), managed by German Technical Cooperation (GTZ).  AFI is a platform for:

Dr. Mas stated that the largest grants currently available from the Gates Foundation are offered through AFI to fund projects and programs that promote financial inclusion.