GLOBALWA.org / Our Blog / Fragmented Aid: the Case for a National Strategy

Fragmented Aid: the Case for a National Strategy 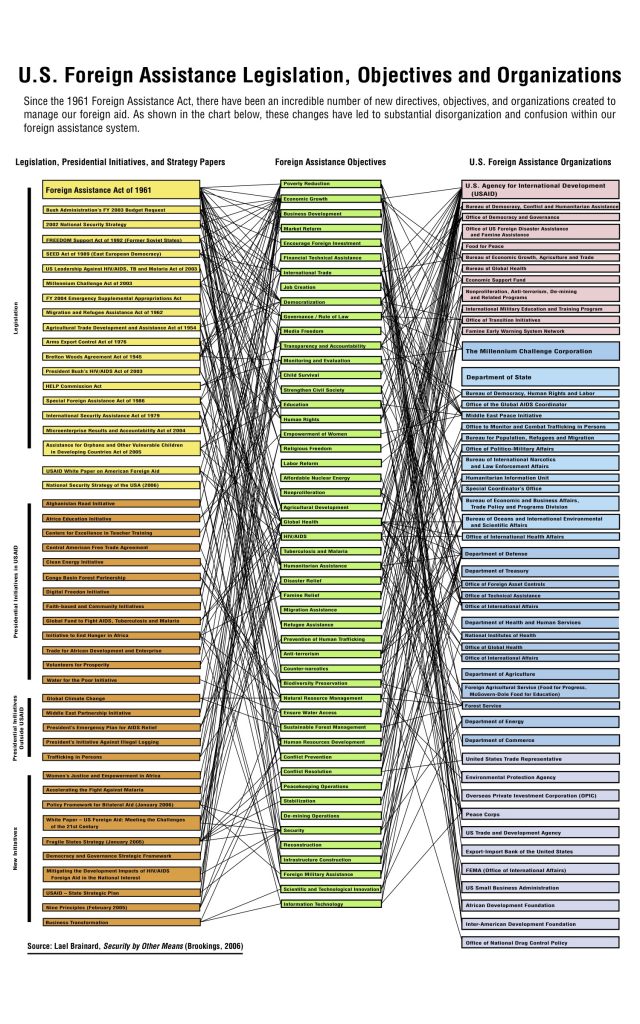 Since the implementation of the Marshall Plan after World War II, America’s foreign assistance operation has grown considerably. In that time, one would expect the overall strategy would be refined and streamlined to effectively balance the foreign policy goals of the U.S. while meeting the needs of the developing world. Unfortunately, the U.S. aid structure has evolved to become a bloated and unwieldy behemoth with no clear, overarching strategy.

The Foreign Assistance Act (FAA) of 1961 sought to organize the international development goals under a single act. In the time since the passage of the FAA, over 400 objectives have been identified through nearly 400 directives, all of which is managed by 12 different departments, 25 agencies, and nearly 60 government offices. To understand the complex and often confusing maze that is U.S. foreign assistance, one can marvel at Lael Brainard’s “Messy Web of the U.S. Foreign Assistance System.” (attached)

Such a muddled structure inevitably leads to miscommunication among the many different entities and a breakdown in the process. With little coordination and virtually no communication, development agencies are often tripping over one another, managing similar projects in the same area. In his article, “Aid Needs Help,” Ray Offenheiser noted “two separate USAID contractors recently discovered by chance they were doing virtually the same project, in the same town” in Afghanistan. To combat the replication of projects and ensure the deliverance of aid, action must be taken to reform the process and elevate a coherent national strategy for development.

The chief component of a national strategy for U.S. foreign assistance would be a cohesive set of clearly established goals and objectives with both short and long term implications for poverty reduction. These objectives should be developed independently of diplomatic strategies and concerns to ensure aid is targeted to those most in need as opposed to partner countries. While foreign assistance goals should be developed separate of other policies, they must be able to interact with other policy areas at a high level, making sure that trade, agriculture and industrial policies complement rather than hinder aid programs.

To ensure such a national strategy would be able to function effectively, the foreign assistance structure must undergo certain institutional reforms. Rewriting the FAA of 1961 would be a necessary first step in clearly defining the role of each institution in the U.S. foreign aid structure. Most important to the coordination and success of a national development strategy is an elevated and empowered USAID, or a cabinet level department of foreign aid.

Accountability and results are also central to creating a foreign assistance structure that will support effective and sustainable development. Within a national development strategy, the U.S. should create systems of monitoring and evaluation systems in the government and independent of the foreign assistance system. Such evaluation mechanisms will simultaneously increase transparency and ensure the national development strategy is being implemented by all development entities, thus increasing coordination. Monitoring development activities by the government and independent entities will also foster a results-based approach to foreign assistance programming, leading to more effective and sustainable project designs.

Without a national strategy for development the foreign assistance structure will continue on its path to become even more of a bloated, bureaucratic mess. For more information on Global Washington’s recommendations for ways to restructure U.S. foreign assistance, please refer to our white paper.