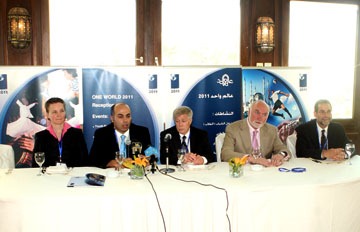 OneWorld launches in Jordan, refer to OneWorld article below for more information. Photo courtesy of OneWorld2011

One World 2011 events will take place in the summer and fall of 2011 in Seattle, Washington

Global Washington member, OneWorld Now, is a proud founding partner of OneWorld 2011. One World 2011 is an international cultural, arts, education, medical exchange and sporting event that will build partnerships, and a bridge for cultural understanding between the United States and the Muslim world. In addition, the One World 2011 Medical Conference will be held in Seattle, focusing on health care and research in a global context.

Southwest Washington Math, Engineering and Science Achievement program (MESA) will host its sixth annual MESA Day on March 20
WSU Vancouver houses, and is a partner of, Southwest Washington MESA. MESA provides enriching educational opportunities that help build a pathway to college and careers in the science, technology, engineering and math (STEM) fields for students who are currently underrepresented in those fields—African American, Latino, Native American, and female.

BRIDGES offers a one-day workshop for educators on April 17th
BRIDGES is inviting to learn the basics of teaching their students how to produce digital stories about their lives, communities and common global issues, and then share them with their peers around the world.

New US education report reveals boys are falling behind in reading and writing abilities
Despite the deadlocks regarding global warming, the domestic economy, and health care, Obama is making headway in education reform. His bottom line goal: the United States to have the world’s highest proportion of college graduates by the year 2020. The likelihood of the US jumping from the middle of the rankings of developed nations to the top in just 10 years is not plausible. However, it is drawing attention to further understand flaws in our current education system and those who need help the most. In a report by the nonpartisan Center on Education Policy, an in-depth look at who is and isn’t passing state tests shows gender disparities between males and females. The survey shows that girls tie with boys in math skills. The reading differences, meanwhile, are profound, with boys a full 10 percentage points behind girls. Boys are even farther behind in writing abilities.