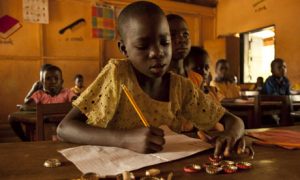 A girl uses bottle tops to count in a math lesson in Ghana. See girls' education in Ghana article below.

Rajiv Shah, the new USAID Administrator, will testify at the upcoming House Foreign Affairs Committee hearing March 3, 2010– U.S. Policies and Programs for Global Development: USAID and the FY 2011 Budget Request.  Check this link after March 3rd for the webcast.

Can donors find a better way to deliver aid? The Center for Global Development is promoting a potential new way to disburse foreign assistance called Cash on Delivery Aid. COD Aid seeks to devise simple, results-based contracts that reward developing countries for making progress towards previously agreed goals—such as increased primary school completion rates, vaccination coverage, or access to clean water.  This would increase local ownership as developing country governments would come up with their own solutions and hire consultants of their choosing, rather than the current model where donors impose solutions and consultants from outside.

After last week’s coup in Niger it faces a potentially severe food crisis. The US suspended all non-humanitarian aid to Niger including the $23 million program focusing on girls’ education and government corruption reduction.

One town is using the country’s obsession with football (ie soccer) to promote girls’ education.  In Ghana, only 79% of girls finish primary school and by the time they complete junior high school just 54% of girls are still in lessons, according to the lobby group the Ghana National Education Campaign Coalition.

UNICEF Seeks to Keep Kids Out of Haiti Orphanages. Marie de la Soudiere, coordinator of the separated-children program in Haiti for UNICEF– the U.N. Children’s Fund– wants to make sure that folks like the 10 US missionaries don’t get many more chances to try reckless engagement in “rescue efforts.” The high-profile case of the 10 US missionaries who were arrested in Haiti for allegedly abducting children has raised an important issue regarding children in devastated areas such as Haiti. Subsequently, she recently initiated a campaign to register Haitian youths, who were among the world’s most vulnerable to trafficking even before the quake. The Haiti list is also designed to prevent children from being placed into Haiti’s muddled orphanages, many of which have long been sources of child trafficking.

The US-founded Engineers Without Borders (EWB) has been a worldwide success in their mission of encouraging young engineers to become leaders in global development. The improvement of the living conditions of people in developing countries has been successful in developing new successful branches such as EWB-India, which has become a major volunteer organization attracting more and more students and organizations despite budget constraints. EWB-India hopes it can motivate its 1.5 million engineering students into helping solve global challenges.
Global Washington members who are involved in  Engineers Without Borders chapters:
Gonzaga University, Seattle Pacific University, Seattle University, University of Washington, Washington State University, Western Washington University.