Home / Our Blog / Where Were You on World Food Day? What can you do NOW if you weren’t there?

Where Were You on World Food Day? What can you do NOW if you weren’t there?

“In the first half of this century, global demand for food, feed and fibre is projected to increase by some 70 percent, while crops may increasingly be used for bioenergy and other industrial purposes. New and traditional demand for agricultural produce will thus put growing pressure on already scarce agricultural resources. And while agriculture will be forced to compete for land and water with sprawling urban settlements, it will also be required to serve on other major fronts: adapting to and contributing to the mitigation of climate change, helping preserve natural habitats, and maintaining biodiversity. At the same time, fewer people will be living in rural areas and even fewer will be farmers. They will need new technologies to grow more from less land, with fewer hands.”

-U.N. Food and Agriculture Organization, High Level Forum on How to Feed the World in 2050
http://www.fao.org/wsfs/forum2050/wsfs-background-documents/hlef-emreport/en/ 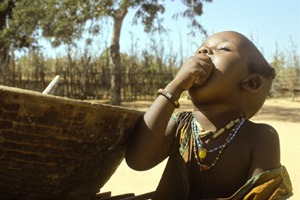 The problem is real, huge, and growing. People are dying of hunger, and not meeting their full potential.  Other world problems are compounded by hunger- for example, hunger makes people more vulnerable to disease.  On October 14th, individuals and organizations around the world stepped up the action and dialogue on World Food Day.  The UN FAO is hosting a World Summit on Food Security in November, and there is still time for representatives from the private sector and civil society and the NGO sector to sign up.

9 facts about child hunger from Save the Children USA:

1.    For the first time in history, more than a billion people live with chronic hunger — and at least 400 million of them are children.
2.    In the developing world, volatile, historically high food prices together with the ongoing impact of the global economic crisis continue to drive families into poverty, putting millions more children at risk of hunger and malnutrition.
3.    Drought is adding to extreme food crises in Guatemala and East Africa. In Ethiopia alone, three million children urgently need food.
4.    A child dies every six seconds from hunger-related causes.
5.    When there isn’t enough food, poor families resort to skipping meals, pulling children from school, selling off livestock and assets and foregoing health care.
6.    Poor families in developing countries typically spend 50 to 70 percent of their income on food. Meanwhile, U.S. families spend only 5 to 10 percent of their budget on food.
7.    When small children are malnourished, their physical and intellectual development may be permanently impaired.
8.    Food shortages will increase as world population grows. By 2050, 70 percent more food will be needed to meet demand. Yet investment in agriculture is historically low.
9.    It takes more than food to end hunger. For instance, the most agriculturally productive region of Mozambique has the highest rates of child malnutrition in the country. Poor families must be able to access a healthy diet.

Agros International, a Global Washington member, writes in their blog about how they contribute to global food security to fight hunger worldwide.  Agros works in Central American communities on community ownership and land development, on the road to sustainable development.

What does your organization do about world hunger?

As an individual, there are many ways to get involved- you can donate money, volunteer your time, and write to members of Congress and other leaders.  You can also share your ideas, and help raise awareness about the issues and possible solutions.  One new way to do this is through crowdsourcing, which uses technology to get ideas from the public.

Not only does crowdsourcing bring creative (and possibly great) ideas to the forefront, but it also gives more people a stake in outcomes.  It may motivate people to get more involved, and donate money to causes.  So crowdsourcing’s greatest effect may be in the side effects.

Kristi Heim’s blog on philanthropy in the Seattle Times has an entry on crowdsourcing, with examples of crowdsourcing initiatives from the Peace Corps, and gmail developer Paul Buchheit’s Collaborative Charity.

And, because I am now in love with crowdsourcing, here’s my idea for Mike McGinn’s campaign – A Real Sister City, inspired by Kristi Heim’s idea.

Global Washington is going to launch its own crowdsourcing initiative very soon- stay tuned for more details on that next week.