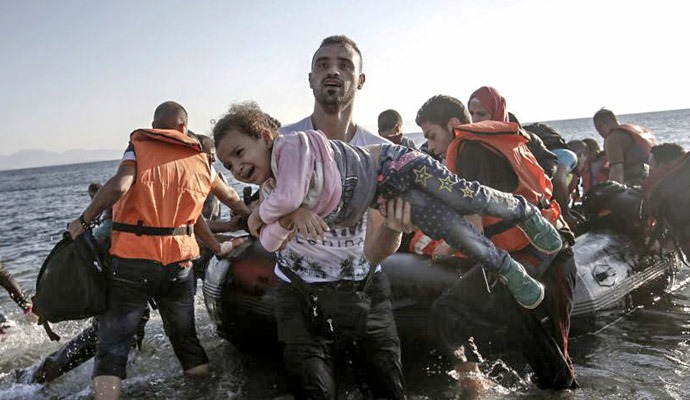 According to a report by the United Nations High Commissioner for Refugees (UNHCR), 65.3 million people globally have been forcibly displaced. That’s more than nine times the population of Washington State, and it means that one in every 113 people on Earth is either an asylum-seeker, internally displaced or a refugee. In fact, if all the forcibly displaced people constituted a nation, they would be the 21st most populous nation in the world.

UNHCR found that just three countries – the Syrian Arab Republic, Afghanistan, and Somalia – contribute more than 50 percent of the global refugee total. Most concerning is that half of all refugees today are children.

For 2017, the UN has appealed for a record $22.2 billion dollars in humanitarian funding to aid nearly 93 million of the most world’s vulnerable people. The dramatic increase in funding needs reflects the global surge in the sheer number of conflicts, as well as their prolonged nature.

“Globally, more than 80 percent of the needs stem from man-made conflicts many of which are now protracted and push up demand for relief year after year,” said Stephen O’Brien, the U.N. humanitarian chief and relief coordinator, according to the Washington Post.

Slightly more than 1 million Syrians became refugees during 2015 alone, the largest number of new refugees globally. The conflict in Syria, which has raged since 2011, has severely devastated the population. By the end of 2015, 13.5 million people in Syria, including six million children, were in dire need. Today, an estimated 8.4 million Syrian children, inside and outside the country, require humanitarian aid, according to the UN children’s agency.

Syria’s largest city Aleppo is poised to return to full government control this week, resulting in the evacuation of thousands of civilians. Tens of thousands of residents in the rebel-held city have been virtually cut off from humanitarian aid during the months-long siege.

Within Syria, protection is currently the most urgent priority for civilians, followed closely by healthcare, water and sanitation. According to the Assessment Capacities Project, 70% of the Syrian population currently lacks regular access to clean drinking water and 95% of people lack access to adequate healthcare (only 43% of facilities are fully operational).

Many Global Washington members are focused on the meeting the humanitarian needs of the millions of people displaced worldwide.

As families search for safety across the Middle East and Europe, the global Red Cross network is providing vital humanitarian assistance to those in need. Red Cross and Red Crescent teams are serving tens of thousands of migrants and refugees, including along the Mediterranean and Western Balkans migratory routes in countries of origin, transit and arrival. This critical assistance includes the distribution of food, water, hygiene kits, baby supplies, clothing and first aid kits. Red Cross and Red Crescent teams are also providing medical care and first aid, shelter and psychosocial support. Additionally, migrants who have been separated from their family members have been receiving assistance from the Red Cross Restoring Family Links program to reconnect with their loves ones.

Among its current programs, Americares is helping vulnerable people caught in the Syria conflict, refugee communities in Jordan, families negotiating the border crisis in the United States, and people in the West Bank, Gaza and Lebanon who have difficulty accessing health services. By providing support to local partners in these communities, Americares is helping refugees and others access critical health care. In Syria, aid from the organization includes more than $7 million in medicine and supplies and support including staff salaries for health facilities that have been targeted by violence. With medicine for diabetes, cardiovascular disease and other chronic conditions, Americares continues to collaborate with partners in the West Bank, Gaza and Lebanon, to help them meet the health needs of vulnerable populations. On the U.S.-Mexico border in Texas, Americares has supplied a structure where families can safely spend the night and access health care after an often lengthy and dangerous journey from Central America. Nearly 10,000 people have used the facility so far. Watch Dr. Dave Campbell and Michael Nyenhuis of Americares on MSNBC discuss the fight to get critical medicine into Syria

The International Rescue Committee provides opportunities for refugees, asylees, victims of human trafficking, survivors of torture, and other immigrants to thrive in America. Each year, thousands of people, forced to flee violence and persecution, are welcomed by the people of the United States into the safety and freedom of America. These individuals have survived against incredible odds. The IRC works with government bodies, civil society actors, and local volunteers to help them translate their past experiences into assets that are valuable to their new communities. In Seattle and other offices across the country, the IRC helps them to rebuild their lives. Read the IRC’s explainer on what’s next for the people of Aleppo.

Along with national governments, the United Nations High Commissioner for Refugees (UNHCR), other NGOs and funding partners such as the Bill & Melinda Gates Foundation, Medical Teams International is responding to mass migration/refugees fleeing conflict and disaster with healthcare service and support in Uganda, Lebanon, Greece, and soon Turkey and Tanzania. With a sudden, recent surge in violence in South Sudan, close to 90,000 more refugees are fleeing to camps in Uganda adding to the 300,000 refugees already being served in Uganda. With over 700 Ugandan healthcare staff, Medical Teams is the UNHCR preferred healthcare provider. Medical Teams’ work includes health intake for all incoming refugees, triage, direct healthcare as needed, WASH, Maternal Child and Newborn Health services, nutrition supplementation and work to treat and prevent malaria, and cholera. Over 85% of new refugees are women and children. Read more about Medical Teams International’s work with Syrian refugees.

Powered by the belief that a better world is possible, Mercy Corps partners to put bold solutions into action, helping people triumph over adversity and build stronger communities from within. This means not only delivering lifesaving assistance like food, water or shelter increasingly through cash, but also tackling root causes like communal tensions and hatred, discrimination, gender inequity, social exclusion, lack of opportunity and how life-shaping decisions are taken by power-holders. It means meeting today’s urgent needs while investing in a more resilient tomorrow. Mercy Corps strives to innovate for greater impact, and they understand that communities are the best agents of their own change and local markets are the best engines of long-term recovery. Today, Mercy Corps’ staff of nearly 5,000 is reaching about 30 million people in more than 40 countries around the world. Check out Mercy Corps’ Quick Facts on the crisis in Syria.

NetHope is an organization that convenes the world’s largest international non-profit organizations (NGOs) and technology giants to help tackle global challenges. NetHope, a 49-member organization, is a catalyst for productive innovation and problem solving in humanitarian crises and conservation work. NetHope is currently engaged in providing Wi-Fi to refugees fleeing persecution, conflict and famine. Read more about how NetHope and its partners are aiding Syrian refugees.

Oxfam America is assisting people affected by the crisis across Syria, Lebanon and Jordan by providing clean drinking water and relief supplies, such as blankets and stoves, and vouchers for hygiene supplies. Oxfam is also helping families get information about their legal and human rights.

RenegAID develops educational materials to help people understand catastrophe trauma and learn the differences between everyday language and the language of survival and regeneration. Disaster policies, procedures and plans are cognitively developed prior to a catastrophe. The language of survival and regeneration is not a cognitive language, but rather a language spoken by survivors within disaster. RenegAID advocates for those who speak the language of survival and regeneration, and believes their leadership is key to overcoming the difficulty that aid organizations face in scaling up and delivering timely relief. The catastrophic mass migration our world is currently experiencing cannot be managed using procedures mitigated in past disasters or written in less confusing times. This catastrophe can only be managed by appreciating the existence of two distinct languages and the indispensable leadership from survivors themselves.

Sixty-five million children around the world are on the move – running from conflict, poverty and extreme weather, looking for a better life and a place to call home. They are among the most vulnerable people on earth – children on the edge. UNICEF is working on the ground to ensure that programs and policies in response to the migration crisis put the rights and needs of all children first. It is also working to expand humanitarian services wherever they are needed on refugee routes, including providing water and age-appropriate food, and establishing child-friendly spaces, where children can play and benefit from psychosocial support, and women can rest and take care of their babies. At the same time, millions of children are still caught in situations of conflict, natural disaster, poverty and underdevelopment – the main root causes of the crisis – and UNICEF remains committed to supporting sustainable solutions where they are needed most. Get the latest reports on children in need in Aleppo and across Syria.

World Vision has worked in the majority of the world’s fragile states for over three decades to support the most vulnerable children and communities. Since the start of the Syria crisis, World Vision has helped more than 2 million children and adults in Syria, Lebanon, Jordan, Iraq, and now Serbia. In addition to meeting urgent relief needs, the organization works in the world’s broken places on the root causes of fragility that perpetuate extreme poverty and drive conflict and forced migration. From places like Syria and Iraq, to Afghanistan, Somalia and South Sudan, World Vision partners with communities, governments and generous donors to provide food, clean water, child protection, education, jobs and health support. They work for lasting change in the lives of children and the poorest, in the hardest places. Read World Vision’s recent Syria refugee crisis FAQ and watch a video from the streets of Aleppo.