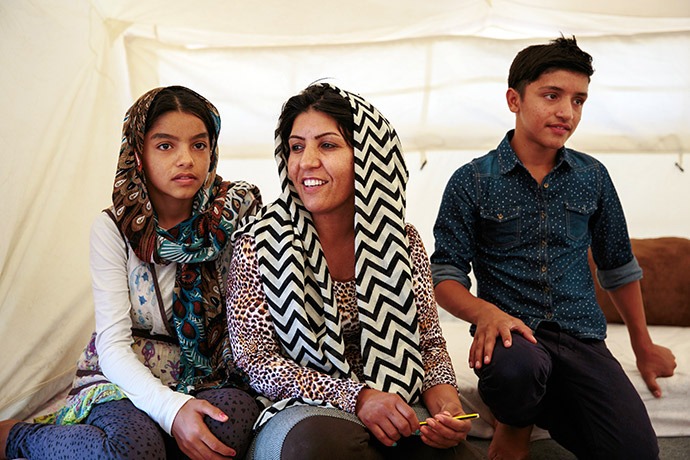 Shakila, center, fled Afghanistan with her kids, Sonia and Arash. Cash from Mercy Corps is helping them meet their urgent needs while living in Greece.
(Photo: Sara Hylton for Mercy Corps).

If you had to flee your home at a moment’s notice, what would you take with you? Money and important documents? Medicines? A change of clothes? Family photos?

According to the United Nations High Commissioner for Refugees (UNHCR), 65.3 million people globally have been forcibly displaced. That’s more than nine times the population of Washington State.

In 2015, UNHCR found that just three countries – Syria, Afghanistan, and Somalia – contribute over half (54 percent) of the global refugee total. Most alarming is that 51 percent of all refugees today are children.

A refugee is “someone who has been forced to flee his or her country because of persecution, war, or violence.” Like refugees, internally displaced people have also been forced to flee their homes, but unlike refugees, they have not crossed an international border. While refugees are most talked about in the media, internally displaced people today outnumber refugees two to one.

Global Washington members are focused on meeting the urgent humanitarian needs of the millions of people who are displaced worldwide. We believe everyone deserves to live in safety.

American Red Cross
Armed conflict, international disasters and migration leave millions of people around the globe in urgent need of humanitarian assistance every year. As a truly worldwide network, the volunteers of the International Red Cross and Red Crescent are able to help families reconnect when they have been separated internationally as a result of conflict, disaster, migration or other humanitarian emergency. Read more about the American Red Cross Reconnecting Family Links Program.

Americares saves lives and improves health for people affected by poverty or disaster so they can reach their full potential. The organization is helping vulnerable families fleeing conflict in Syria, Burundi and Yemen, delivering lifesaving treatments to Somalia where a prolonged drought has forced hundreds of thousands of people from their homes, and assisting families fleeing violence in Central America. Americares programs support health care services for refugees as well as host communities. For the Syria crisis alone, Americares has provided more than $12 million in aid since 2012. By collaborating with partner organizations, Americares is able to reach vulnerable families with critical health programs, medicine and supplies.

The International Rescue Committee provides opportunities for refugees, asylees, victims of human trafficking, survivors of torture, and other immigrants to thrive in America. Each year, thousands of people, forced to flee violence and persecution, are welcomed by the people of the United States into the safety and freedom of America. These individuals have survived against incredible odds. The IRC works with government bodies, civil society actors, and local volunteers to help them translate their past experiences into assets that are valuable to their new communities. In Seattle and other offices across the country, the IRC helps them to rebuild their lives.

Along with national governments, the United Nations High Commissioner for Refugees (UNHCR), other NGOs and funding partners, Medical Teams International is responding to mass migration/refugees fleeing conflict and disaster with healthcare service and support in Uganda, Lebanon, Greece, and soon Turkey and Tanzania. With a sudden, recent surge in violence in South Sudan, close to 90,000 more refugees are fleeing to camps in Uganda adding to the 300,000 refugees already being served in Uganda. With over 700 Ugandan healthcare staff, Medical Teams is the UNHCR preferred healthcare provider. Medical Teams’ work includes health intake for all incoming refugees, triage, direct healthcare as needed, WASH, Maternal Child and Newborn Health services, nutrition supplementation and work to treat and prevent malaria, and cholera. Over 85% of new refugees are women and children.

Powered by the belief that a better world is possible, Mercy Corps partners to put bold solutions into action, helping people triumph over adversity and build stronger communities from within. This means not only delivering lifesaving assistance like food, water or shelter, but also tackling root causes like communal tensions, discrimination, gender inequity, social exclusion, lack of opportunity and how life-shaping decisions are taken by power-holders. It means meeting today’s urgent needs while investing in a more resilient tomorrow. Mercy Corps strives to innovate for greater impact, and they understand that communities are the best agents of their own change and local markets are the best engines of long-term recovery. Today, Mercy Corps’ refugee response reaches displaced people in more than 20 countries; Mercy Corps’ staff of nearly 5,000 is reaching about 30 million people in more than 40 countries around the world. mercycorps.org/refugeeday

NetHope empowers committed organizations to change the world through the power of technology. For refugees, access to information is a necessity. NetHope provides Wi-Fi and charging station solutions in Greece, Slovenia, and Serbia that connect refugees to family, news, and resources. It also helps refugees rebuild their lives in Germany through the distribution of managed Chromebooks and is exploring ways to make education available to refugee children.

Oxfam works with local partners in more than 90 countries. Its programs support people displaced by conflict, food insecurity, and climate change in countries such as: Iraq, Somalia, South Sudan, Sudan, Syria, and Yemen. Oxfam helps provide clean water, sanitation services, cash and relief supplies, and rent assistance. The organization also provides information about the rights of people displaced from their home and helps to connect people with services such as legal aid. While Oxfam helps people with their immediate needs, the organization also engages with allies and all levels of government to focus on peace and find sustainable solutions to the conflict and violence that ruin so many lives. Oxfam also pushes for wealthy countries to be more responsive to this global crisis, and do their fair share by responding to the needs of refugees and welcoming them for resettlement.

RenegAID develops educational materials to help people understand catastrophe trauma and learn the differences between everyday language and the language of survival and regeneration. Disaster policies, procedures and plans are cognitively developed prior to a catastrophe. The language of survival and regeneration is not a cognitive language, but rather a language spoken by survivors within disaster. RenegAID advocates for those who speak the language of survival and regeneration, and believes their leadership is key to overcoming the difficulty that aid organizations face in scaling up and delivering timely relief. The catastrophic mass migration our world is currently experiencing cannot be managed using procedures mitigated in past disasters or written in less confusing times. This catastrophe can only be managed by appreciating the existence of two distinct languages and the indispensable leadership from survivors themselves.

Fifty million children around the world are on the move – 28 million of whom have been forcibly displaced by conflict and violence, and millions more migrating in the hope of finding a better, safer life. UNICEF is working to ensure that programs and policies in response to this humanitarian crisis put the rights and needs of all children first. Along refugee routes, UNICEF is providing lifesaving services including water, nutrition and health care, and establishing safe spaces where children can play, learn and receive counseling. At the same time, UNICEF is working to address the root causes that force people to flee. In Africa and the Middle East, looming famine due to conflict and drought is exacerbating the refugee crisis. As the world’s largest buyer of ready-to-use therapeutic food – procuring 80 percent of the lifesaving miracle treatment for malnutrition, UNICEF is uniquely positioned to save lives. For just .37 cents, a therapeutic food packet can help save a life. Support UNICEF’s work for the world’s most vulnerable children.

World Concern is a Christian global relief and development organization. Faith compels the organization’s leaders to extend life-saving help and opportunity to people facing the most profound human challenges of extreme poverty. Many of those World Concern serves are displaced by crisis or conflict. Having fled their homes with nothing, they’re in need of immediate, life-saving assistance. World Concern meets these needs as a critical first step in paving the way for lasting, sustainable change. In partnership with its supporters, World Concern’s efforts reach deep into the most remote corners of the planet—beyond the end of the road. World Concern asks the people it helps to serve alongside—building the programs they need—enabling them to realize their God-given potential. World Concern operates transformational community development programs in Haiti, Kenya, South Sudan, Somalia, Chad, Uganda, Sri Lanka, Nepal, Bangladesh, Laos, Myanmar, and Vietnam.

World Relief Seattle provides vital services to refugees and immigrants as they rebuild their lives in Washington state. The organization provides foundational resettlement services, including economic empowerment training for women, ESL classes, and a legal clinic. In 2016, World Relief Seattle resettled more than one-quarter of all the refugees entering Washington state, a total of 1,135 individuals. Over the long-term, refugees build mutually transformative relationships that prepare them to become fully functioning and vibrant participants in their communities.

World Vision has worked in the majority of the world’s fragile states for over three decades to support the most vulnerable children and communities. Since the start of the Syria crisis, World Vision has helped more than 2 million children and adults in Syria, Lebanon, Jordan, Iraq, and now Serbia. In addition to meeting urgent relief needs, the organization works in the world’s broken places on the root causes of fragility that perpetuate extreme poverty and drive conflict and forced migration. From places like Syria and Iraq, to Afghanistan, Somalia and South Sudan, World Vision partners with communities, governments and generous donors to provide food, clean water, child protection, education, jobs and health support. They work for lasting change in the lives of children and the poorest, in the hardest places.