By Earthworm Foundation, reprinted with permission 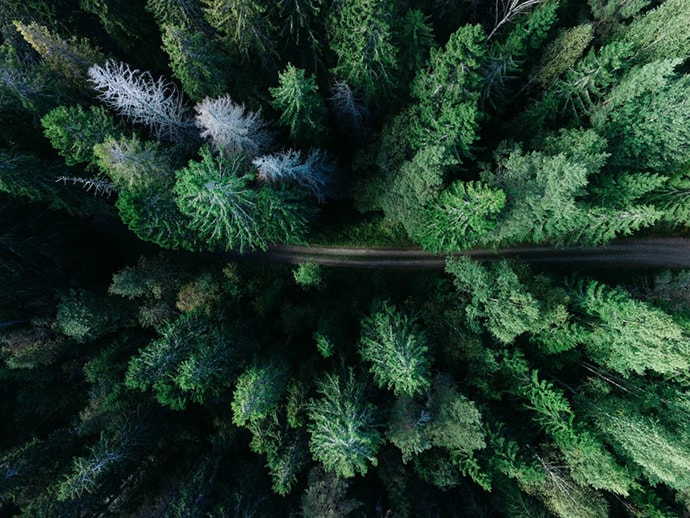 3M, Mars, Nestlé and Earthworm Foundation are partnering with the Tsay Keh Dene First Nation in British Columbia, Canada to help respect their rights to decide how their territory is managed. This includes protecting key areas in their territory from unwanted harvesting for pulp and paper or other industrial activities.

First Nations and the Forestry Sector in B.C.

In 2019, Canada exported $33.2 billion worth of forest products, like lumber and wood pulp. It is the fourth-largest exporter worldwide. Nearly half of its wood comes from the province of British Columbia (B.C.), with the forestry sector employing over 55,000 people. This wood is used for construction, energy biomass, and a wide range of pulp and paper products like packaging. Directly or indirectly, it also ends up in the supply chains of Earthworm members like 3M, Mars and Nestlé – that have responsible sourcing policies committing them to protect High Conservation Values (HCV) and Free, Prior, Informed Consent (FPIC). 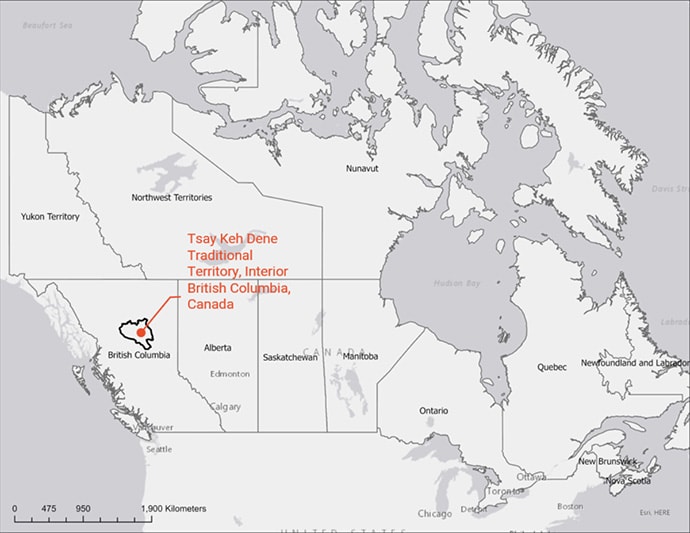 The B.C. province is also home to over 232,000 Indigenous people. It is here that the Tsay Keh Dene reside. In the northern interior of the province, their territory spans 3.2 million hectares across the watersheds of the Ingenika, Ospika, Swannel and Finlay Rivers, to name a few.

“The Tsay Keh Dene are culturally ‘Sekani,’ often translated as ‘people of the rocks’ or ‘people of the mountains,’” said Chief Johnny Pierre. “The Sekani were the original inhabitants of the Rocky Mountain Trench in British Columbia.”

Traditionally, the Tsay Keh Dene people moved based on seasons and available resources. They continue to do so today – moving from cabins to camp sites across their territory, which contains intact forest landscapes, endangered woodland caribou and other important flora and fauna.

“Our way of life is intimately connected to the land, water and resources in Tsay Keh Dene territory,” Chief Pierre said.

“For the Tsay Keh Dene people, these forests and all life inhabiting them are not simply commodities, but sources of sustenance, culture, history and extended family. The TKD Nation is working to sustainably manage their territory for generations to come,” said Robin Barr, who leads Earthworm’s work on community and indigenous rights.

“This is the driving force behind the collaboration between the nation, Earthworm Foundation and its private sector members,” she said.

Collaboration and Respect – the Keys to Success

The origins of this collaboration lie in traceability work Earthworm regularly conducts with its members, which involves tracing products like pulp and paper through multiple intermediary suppliers and all the way back to their raw material sources. After mapping its members’ supply chains to the northeast of B.C., Earthworm’s field team visited the city of Prince George to meet the main actors in the region. This was what led to their first interactions with Tsay Keh Dene Nation (TKDN) and the understanding that there were overlaps between the nation’s land and provincial timber supply areas.

These conversations eventually led to the signing of a Memorandum of Understanding in December 2019 between the Tsay Keh Dene Nation and Earthworm Foundation. The aim was to support the nation’s management plans for their territory, including establishing key protected areas, carrying out High Conservation Value (HCV) assessments to protect or enhance HCVs, and supporting engagement with forest companies operating in their territory to ensure that the companies were respecting TKDN’s expectations as needed.

After the signing, a training was conducted introducing the TKDN’s Land, Resources and Treaty Office and their environmental consultancy company, Chu Cho Environmental, on how to carry out a High Conservation Values (HCV) assessment.

“We’re following Tsay Keh Dene Nation’s lead,” said Earthworm forester and project manager Chris Raynham. “We’re there to support, and to help translate some of their values into an HCV assessment framework, which is a global framework that industry understands around the world. Then we can move to help mitigate any harvesting that may harm those values, and have industry respect the Tsay Keh Dene’s right right to Free, Prior, Informed Consent (FPIC), so that they can sustainably manage their traditional territory.”

“Of the rights recognised in the UNDRIP (UN Declaration on the Rights of Indigenous Peoples), FPIC is perhaps the most significant in realising Tsay Keh Dene’s hopes and vision for a sustainable future,” said Chief Pierre.

“FPIC is the foundation to reconciliation and empowering Tsay Keh Dene people to become self-determining and self-reliant,” he said.

Alongside promoting FPIC recognition, the Tsay Keh Dene Nation and Earthworm are now conducting an HCV assessment in the culturally significant Chuyaza (Helicopter Lakes) Area. With support from Nestlé, deforestation in the area is also being monitored using , which can uncover land cover change with almost pinpoint accuracy.

“HCVs may include critical caribou habitat, historical cabins or camping sites,” said Earthworm’s Robin Barr. “Also sites for gathering medicinal plants or subsistence plants such as berries.  There may also be spiritual values that they associate with an area.”

“Once these values are identified, a management plan will be developed with community members and presented to the Tsay Keh Dene Chief and Council for review.  Once approved, it can then be shared with the provincial government and logging companies for their input and agreement,” she explained.

Alongside the Chuyaza HCV management plan, the TKD Nation has declared the establishment of an Indigenous Protected Area in the Ingenika watershed, and are developing a Forest Stewardship Framework for forestry companies that have operations in the nation’s territory.

“Earthworm Foundation has shown it is committed to true partnership with Tsay Keh Dene,” said Chief Pierre. “Hopefully, the collaboration on the Ingenika Indigenous Protected Conservation Area and Chuyaza Helicopter Lakes HCV assessment is only the beginning of a long and mutually rewarding partnership in building a sustainable future together.”

The Push from the Private Sector

Another key part of the puzzle is the responsible sourcing policies of Earthworm members 3M, Mars and Nestlé, who source directly or indirectly from suppliers in the region and are funding Earthworm’s activities there. These companies’ policies mean that they have committed to respecting indigenous peoples’ rights to free, prior, informed consent on activities impacting their resources, as well as the protection of High Conservation Values.

“The power of the market could be decisive,” Raynham said, “If the customers buying timber ask suppliers whether they’re following the requirements that the Tsay Keh Dene have outlined, that will influence a more collaborative approach.”

Kate Shelton, Global Responsible Sourcing Manager at 3M leads the global strategy for the company’s Pulp and Paper Sourcing Policy, which is the foundation of what they expect from upstream suppliers.

“Sustainability is at the heart of 3M and we’re always trying to do more,” Shelton said. “By continuing to strengthen our sustainability commitments and actions, we believe we can meet the increasing expectations from our customers, employees, investors and stakeholders, and grow our business”

“One requirement of this policy is that our direct suppliers provide full supply chain traceability from the paper and pulp mills down to the source of harvest. Through this, we were able to confirm that we have suppliers connected to British Columbia. And with the support of Earthworm, we identified opportunities to improve the supply chain through supplier engagement and indigenous-led conservation,” Shelton explained.

Respect for indigenous land rights is also included in Nestlé’s Responsible Sourcing Standard. In 2021, Nestlé launched its Forest Positive strategy, which outlines how it will help conserve and restore forests and natural ecosystems while promoting sustainable livelihoods and human rights.

“Our focus is to increase engagement with local communities and leverage our influence to secure land rights for indigenous peoples and local communities,” according to Michèle Zollinger, Global Sustainable Sourcing for Pulp and Paper & Climate Lead for Nestlé. “Consumer goods companies who are sourcing in regions where situations like these exist have a critical role to play through their market influence with suppliers. Jointly they can help to unlock these tricky situations by engaging suppliers.” 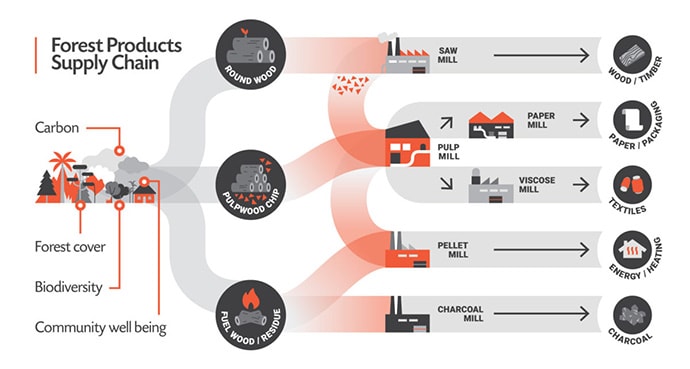 Similarly, Mars’ Sustainable in a Generation Plan covers its ambition to tackle environmental and social issues, in support of the UN’s Sustainable Development Goals. Under this umbrella, it’s Pulp and Paper Action Plan outlines its commitment to source paper-based packaging that is free from deforestation and exploitation of people.

“We know that the global economy — including global businesses like ours — needs to do much more to ensure that forests and the people that rely on them are both protected and supported,” said Rodrigue Kreilmann, Corporate Sustainability Governance Manager at Mars. “We see this work as crucial for the TKDN and the forests they steward, and also as a bright example to encourage others in the private sector to engage and empower vital communities in their supply bases. With the impacts of climate change, the pandemic and social injustice, we believe we can and should, play a role in being a positive force in the world for years to come.”

“Ultimately, companies have a vital role to play in requiring suppliers to respect the rights of Indigenous People who are impacted by their activities. This requires supply chain mapping, supplier engagement and direct communication with Indigenous People to closely monitor whether or not suppliers are meeting their expectations. This is exactly the work we are now doing with the Tsay Keh Dene Nation,” Barr said.