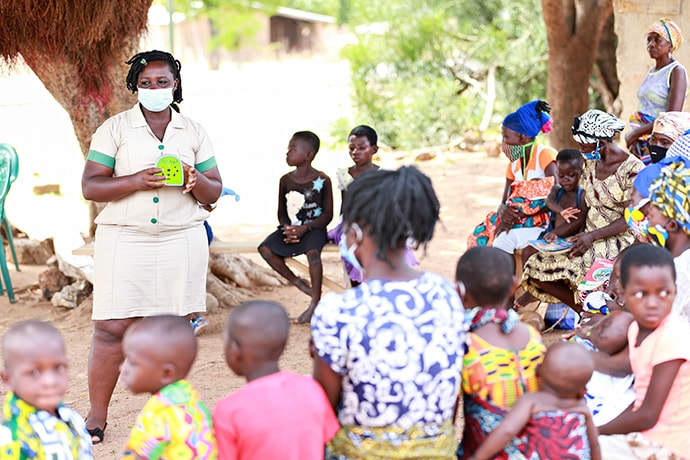 Too often, mental health education is left to community health workers who have no formal mental health training. Although GHS established self-help groups, only about 30 groups are active in the region, which has a population of over 900,000 people.

Amplio is working with GHS and UNICEF to improve access to mental health education in the Upper West Region, as part of an ongoing public health initiative. In 2019, we partnered on a Talking Book pilot at five Community-based Health and Planning Service (CHPS) compounds. Community health nurses and volunteers used the Amplio Talking Book audio device to deliver quality health messages in various local languages. The project scaled in 2020 during the COVID-19 pandemic, and it continues to expand. 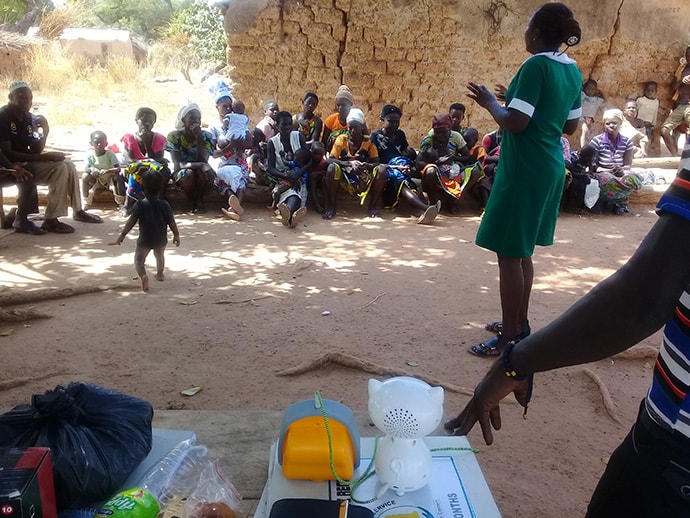 CHPS nurse leading a child welfare clinic with the Talking Book in the foreground – it’s attached to a battery-powered outdoor speaker shaped like a kitty. The device has a speaker that works for families/household listening and groups of up to about 20. But if you want to reach a larger group or maintain social distancing, you can attach the Talking Book to an outdoor speaker via the head jack.

“When I speak to people alone, they don’t take me seriously,” said Anthony Kantie, a community volunteer. “But since I’ve had the Talking Book, they’re always interested in what the device is saying. It has made my work much easier.”

Amplio Ghana’s senior content manager, Fidelis Da-Uri, said the CHPS project is currently working to strengthen the prevention and treatment of maternal depression, as well as drug and substance abuse.

“Some of our programs in the past also captured mental health. For example, UNICEF Ghana’s Talking Book program expansion in the Upper West and Northern regions included maternal depression as part of its C4D messaging,” Fidelis said.

In 2020, when the government’s COVID-19 safety protocols included travel restrictions and the closure of schools, churches, and mosques, Amplio Ghana worked with GHS and UNICEF to address an increase in depression and domestic violence.

“In Q3, when we saw an increase in domestic and gender-based violence during the pandemic, we were able to update Talking Books with new content to promote mental health and peaceful homes, including information on where to get help.”

With the Amplio smartphone app, you can update Talking Book content in places where there’s no electricity or connectivity. The app collects Talking Book usage data and user feedback at the same time. Fidelis said this feature helps the team to identify and swiftly respond to emerging issues, such as a recent yellow fever outbreak.

Substance abuse is a leading cause of mental illness in the Upper West Region.

“Excessive use of alcohol, marijuana, tobacco, and tramadol is high among young people in the region. For example, tramadol has been nicknamed ‘farm and buy cow.’ because it gives users extra energy to work,” Fidelis said.

“For the CHPS concept, the topic of drug and substance abuse was included from the start, but our team is always responding to emerging issues and requests. During our recent CHPS inception meetings, in preparation for scale-up in new districts, we received feedback about youth mental health awareness content creation.”

One of the Talking Book’s most innovative features is the user feedback function. A built-in microphone enables users to record their questions or comments. (Sometimes communities record their own songs!) The CHPS and UNICEF programs encourage community members to record user feedback. This gives people an opportunity to ask questions or share experiences about sensitive topics they might not be willing to discuss in a group or public setting. 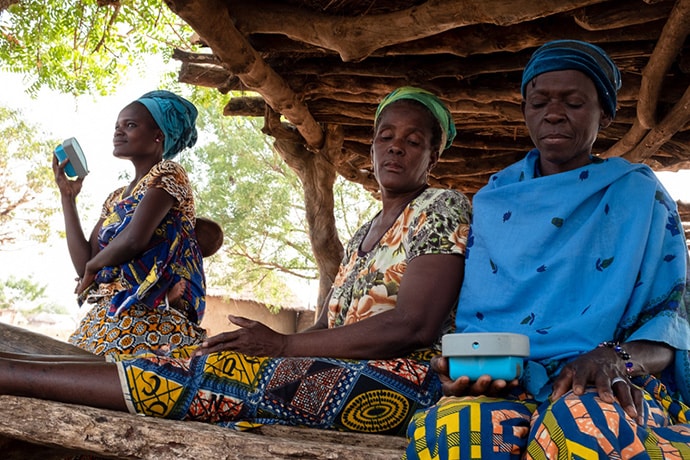 Talking Book user feedback is anonymous — unless someone chooses to identify themself. However, the data and user feedback for each device is linked to a group or community, allowing Amplio and its partners to identify and respond to local issues and trends, including barriers to behavior change.