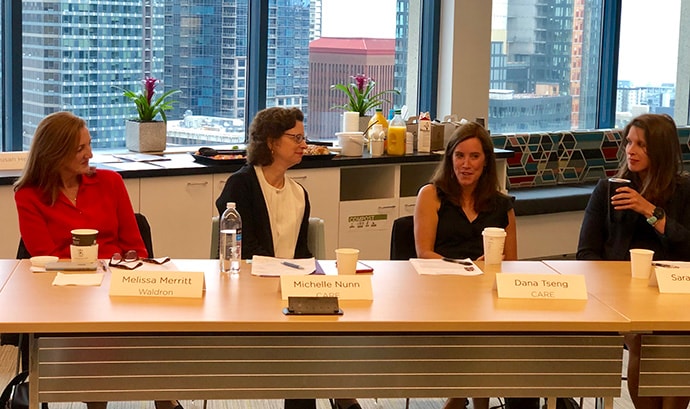 CARE USA President and CEO, Michelle Nunn (second from left) is joined by CARE colleagues at Global Washington for a roundtable discussion on ending violence against women.
(Photo: Peachie Ann Aquino for GlobalWA).

“Achieving real equality for women and eradicating gender-based violence can transform the world in many ways” stressed Michelle Nunn, President and CEO of CARE USA. “The highest and most powerful good that we can do is to invest in local women’s grassroots movements who are creating social and societal change”

This was the main message during the roundtable discussion on gender-based violence, hosted by Global Washington on July 19, 2019. The event was well-attended by Women of the World members and other local philanthropists.

Women around the world are disproportionately impacted by poverty and gender-based violence. Nunn highlighted astounding statistics, starting from the missing 100 million girls and women killed through gendercide and sex-selective abortion, and the 14 million girls married before the age of 18, to the 4 million girls at risk of undergoing female genital mutilation every year.

In an effort to address these issues, CARE has launched various initiatives aimed at empowering women and engaging boys and men in gender equality actions.

For example, CARE supports the representation of women from South Sudan in peacekeeping efforts with the United Nations and shaping their capacities to be long-term change agents.

In Jordan, CARE created the Women Syrian Council, composed of Syrian women refugees who are working together as leaders and representatives to help advocate for refugee and women’s rights.

In Egypt, male tuk-tuk drivers were mobilized as emissaries and ambassadors to make public spaces and transportation safe for women.

CARE has also worked with solidarity groups and created a village savings and loans program with a small group of women in Niger. This initiative, which has now expanded to 43 countries, has become a powerful force in driving economic independence for women.

In the United States, CARE is leading the effort to structurally integrate safety for women and girls within humanitarian relief and assistance through a bill called Safe from the Start.

Asked whether CARE is tracking its progress in achieving Sustainable Development Goal (SDG) 5: Gender Equality, Nunn said that CARE has set collective goals and indicators to address specific issues, including women’s economic empowerment, education, sexual and reproductive health, gender based violence, nutrition, security and emergency response. However, more needs to be done to ensure that all actions, both globally and in the U.S., are aligned.

Given that the SDG’s are interrelated and mutually reinforcing, building a global coalition to advance gender equality is critical.