On Thursday, June 11, 2019, the World Affairs Council of Seattle hosted an event to highlight the alarming increase in wildlife poaching and trafficking of illegal animal products globally. With spokespersons from University of Washington, Vulcan, Woodland Park Zoo and the Port of Seattle, the event gave a sense of the scale of the challenge, as well as what local organizations are doing to address it.

As a community partner to WAC Seattle, Global Washington supported the event and distributed copies of a new issue brief with specifics about organizations that have ties to Washington state and are working at the intersection of wildlife conservation and human development.

The event opened with a lively presentation by Washington Department of Fish & Wildlife Detective Lauren Wendt, together with her partner, a Labrador retriever named Benny, who helps track down smugglers of illegal wildlife products. Together Detective Wendt and K9 Officer Benny patrol the state’s ports of entry to shut down illegal trafficking operations. 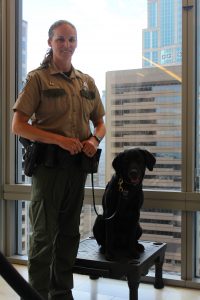 According to the US Department of State, “Wildlife trafficking is a multibillion dollar transnational organized criminal activity and a critical conservation issue.” Benny is trained to identify elephant ivory, rhino horn, bear gallbladder, shark fin, and pangolin, as well as firearms and spent casings.

After Wendt concluded her presentation, the panel kicked off with moderator Kerston Swartz, Senior Manager of Public Affairs and Advocacy at Woodland Park Zoo, and speakers Art Min, Vice President of Impact for Vulcan, and Samuel Wasser, Director of the Center for Conservation Biology at the University of Washington.

Global Washington partnered with the World Affairs Council, Woodland Park Zoo, the Port of Seattle, and Vulcan for a discussion with Dr. Samuel Wasser, Director of the Center for Conservation Biology at the University of Washington, and Art Min, Vice President of Impact at Vulcan, on how Seattle is innovating to combat illegal wildlife trafficking. Kerston Swartz, Senior Public Affairs and Advocacy Manager at the Woodland Park Zoo, moderated the conversation.

Wasser and Min were first asked to give a brief overview of their work.

Min noted that Vulcan looks for solutions to intractable problems in wildlife conservation and climate change, and believes that technology can be a force multiplier– helping those on the front lines make better decisions and build capacity for their efforts. Vulcan seeks to influence policy and consumer demand by using a combination of data and storytelling to address underlying challenges.

Wasser, meanwhile, described how his team works in the “transnational organized crime arena” and uses a combination of high-tech and low-tech methods to get a better understanding of how and where smugglers operate. For instance, Wasser and his team extract DNA from elephant dung in order to make a map of where the animals live. That way when elephant tusks are confiscated, they can analyze the DNA to find out where they originally came from.

In addition Wasser’s team has developed a high-throughput method of searching containers at the Port of Seattle without breaking the customs seal. As Wasser described it, the air is sucked out of the containers, and the dogs sniff the extracted air offsite. If a container is flagged, the team often lets suspicious containers travel all the way to their destination, and then they can catch the smugglers when they come to retrieve them.

Not including fisheries, the value of the illegal wildlife trade approaches $20 billion dollars a year, according to Wasser. Technology can be a great help when it comes to tracking down traffickers, but he believes it can also be a curse. Many illegal wildlife products move through Facebook, eBay, and Google, he said. Criminals also know how to trick the algorithms that customs officials use to identify containers that are considered high-risk for contraband. For instance, ivory is never moved out of the country it was poached in. Smugglers change the start and end destinations to come across as low risk.

Asked whether the U.S. is part of the problem, Wasser replied, “Absolutely.” The U.S. is still a major consumer of ivory – often it is carved into hunting knife handles. Wasser believes education is vital for curbing demand of these products, but it can take time.

There are 50 tons of ivory seized every year (about one-tenth of what’s shipped), Wasser said. Yet far less is ending up in markets. In a sad twist, they have found that entrepreneurs are stockpiling ivory in hopes that elephants will one day go extinct, and then they can sell the products with impunity.

On the policy side of the equation, Woodland Park Zoo had been working to get a bill passed in WA state that would make it unlawful to sell, exchange, transfer or traffic in products made with endangered species. After the bill failed in the legislature, the Zoo was approached by Vulcan to help run a ballot initiative with the same goal. Initiative 1401, the Washington Animal Trafficking Act, was passed by the state’s voters in 2015.

The Zoo continues to educate the public about what the ban means and why it is so important to protect endangered species in the wild. In April of this year, the Zoo held an event called Toss the Tusk, where they invited members of the public to legally dispose of any ivory, pelts, or other animal artifacts they owned that were made from endangered animal parts.  The Zoo didn’t know how many people to expect, but Swartz said that within four hours, 550 items had been dropped off.

What you can do –