Event Recap: A Vow to End Child Marriage by 2030

By Angelia Miranda
(With contributions from Sheila Panyam) 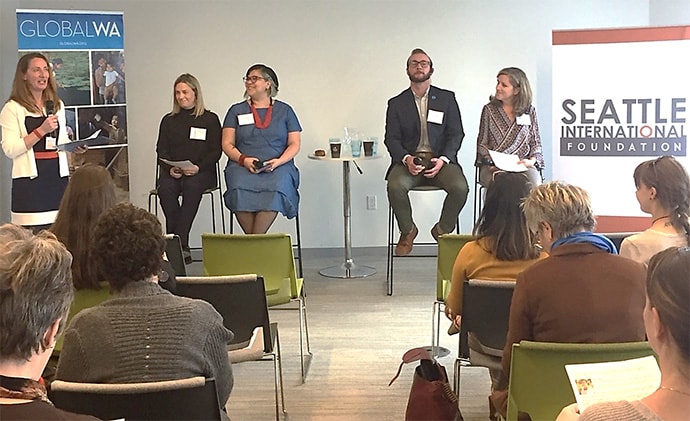 Of all the women and girls alive today, 650 million were married before the age of 18. For some, it happened when they were much, much younger. Child marriage, or early marriage, is a practice that is more widespread—and more complex—than one might think. Perpetuated by gender inequities, lack of access to education and resources, and social norms, child marriage is a critical issue that presents severe consequences for the millions of girls still at risk. The UN has identified the elimination of child marriage by 2030 as one of the Sustainable Development Goal targets. According to Kristen Dailey, Executive Director of Global Washington, in order to reach that target the global community needs to work 12 times faster.

To shed light on the critical importance of this issue, Global Washington and the Seattle International Foundation co-hosted a panel on March 27th to discuss the complex and multi-faceted issue of child marriage. The panelists were Cathy Herholdt, Senior Communications Director, World Concern; Eric Sype, Community Engagement Fellow, UNICEF USA; and Perla Vázquez, Deputy Program Director, Seattle International Foundation. The panel was moderated by Thea Handelman, a Board Member of the Women’s Justice Initiative and Senior Manager at Amazon.

The risks of child marriage are grave. Eric Sype referenced data showing that girls married before the age of 18 are more likely to be victims of domestic violence, drop out of school, and contract life-threatening diseases. Simultaneously, their children are more likely to be born with birth defects and die within the first year of life. Sype cautioned that while such data helps to inform programming and advocacy, the issue of child marriage is highly complex and always needs to be understood in the local context. As he said, “There is always some level, especially at a community and cultural level, that data can’t always collect.”

Even when collected, data may not tell the whole picture. Perla Vázquez, Deputy Program Director for Seattle International Foundation’s Central American and Mexico Youth (CAMY) Fund, works in Latin America where the number of child marriages officially recorded does not always reflect reality. “In other parts of the world, the prevalence of child marriage is decreasing little by little,” Vázquez said. “In Latin America, it has been increasing.”

Cathy Herholdt, Senior Communications Director for World Concern, spoke to another facet of early marriage, pointing out that it presents risks not only to physical health but to mental health as well. “Many of the girls I spoke with who were married at 12 or 13 years old felt hopeless, and very depressed,” she said. “The girls who are at risk of being married off are terrified…They know what’s ahead for them, and they don’t want that.”

How Communities Break the Cycle

As the panelists made clear throughout the discussion, child marriage does not happen in a vacuum. It is part of a greater system of oppression with many underlying drivers such as a lack of gender equity and access to education; poverty; absence of resources for unplanned pregnancies, health, and safety; and also local cultural and religious norms. These can all force families to feel that there is no other option. Recognizing the many facets of child marriage is, therefore, a prerequisite to ending it in a way that is comprehensive and sustainable in the long-term.

It often starts with the local community.

Both Herholdt and Sype spoke about the importance of obtaining support from leaders of the community: political leaders, religious leaders, and women. By raising awareness of both the risks of child marriage and the benefits to the community from keeping girls in school, organizations can empower local stakeholders to break the cycle of early marriage within their own communities.

“When women learn about the risks of child marriage, they become advocates for the girls,” Herholdt said. Research has shown that women who are educated on child marriage are more prepared to deal with and learn to prevent it. Herholdt gave an example of women who, when they learn that a family is thinking about marrying off their daughter, go to their home as a group to speak with them about the risks and ask them to reconsider. “When it comes from within the community, it can have a really incredible impact.”

The panelists emphasized the importance of providing alternatives and direct interventions alongside educational efforts. World Concern provides scholarships to girls at risk of child marriage that allows them to stay in school. UNICEF USA works within local government sectors to achieve long-term structural change and put in place comprehensive legal frameworks that protect against child marriage. In Latin America, CAMY has found that de-stigmatizing premarital sex through education and access to health resources is an important step to reducing the cultural shame that encourages girls to marry early. “We need to change the perspective of love and couples, especially the role of men,” Vázquez said. “Ultimately, the work comes down to young women learning from a young age that their bodies are their own.”

As the goal of eliminating child marriage by 2030 approaches, the global community must be continually cautious and intentional in making sure that the drivers of change are coming from the local communities in ways that are appropriate and culturally competent.

Although child marriage occurs throughout the world, it is different and complex depending on the community. “To operate and understand the complexities,” Sype said, “You need to be in the communities and speaking the language.” To do this, many organizations employ individuals who are from the very communities they work within. “Energizing the people from the communities themselves is important, as they are the ones best situated to help,” Vázquez added. For her, an important piece of that is involving indigenous youth themselves in efforts to understand and address the problem.

When it comes to what we as individuals can do to help, the answer was deceivingly simple: talk about it. Raising awareness and addressing misconceptions of child marriage is important not only in the communities that are at risk but also within our own circles, where too many remain unaware. Across the globe, mothers and girls are forced to watch their daughters and sisters fall into the cycle of child marriage, unable to say anything; but we can.

In April 2018, Herholdt visited a preschool in a Bangladeshi village that World Concern had helped create. There, she encountered a vibrant young woman working as a teacher. At 14 years, the young woman’s father had told her she would be married off soon, but instead of falling into the cycle, she received a scholarship that allowed her to finish high school and work as a teacher before attending university. “The expression on her face was completely different,” Herholdt recalled. “She had hope. And that gives me hope.”